Billions in investment, unfit for learning… the eyesores called ‘schools’ in Plateau


In 2007, when the then administration of former Governor Jonah Jang of Plateau State declared a “state of emergency” in the education sub-sector due to the deplorable state of infrastructure in public schools in the state, many heaved a sigh of relief, believing that the sub-sector would receive a boost that would make teaching and learning a desirable exercise.

At that time, it was common for children to learn under trees and makeshift tents, and most schools closed for the day whenever there was rain fall or scorching heat of the sun.

Executive Chairman, Plateau State Universal Basic Education Board, SUBEB, Sarah Ochekpe, at the time seized every moment to tell everyone how the Board was making efforts to reposition public schools’ infrastructure in line with the declared state of emergency.

Few years down the line, Vanguard Learning discovered that nothing seemed to have changed as there is no tangible improvement in infrastructure in public schools in the state as pupils, students and teachers still struggle for learning and office spaces and toilet facilities are almost non-existent. Plateau State has 2,420 public primary schools and 305 junior secondary schools and all of them have benefited from either special or normal intervention from SUBEB.

The said “state of emergency” which was to ensure accelerated development, had no significant impact as all the respondents who spoke with Vanguard Learning lamented the state of infrastructure and called for urgent help to remedy the situation.

Contractors who executed the few intervention projects did such shoddy jobs that looking at structures renovated or built in public schools in the last three years, there are glaring cases of sub-standard performances. Most structures are already begging for repairs thereby leaving students and teachers disappointed and the reason for such incompetence was lack of proper supervision of each stage of the renovation by relevant SUBEB and Local Government Education Authority staff before completion.

At the GSS,Utan, SUBEB claimed that there was a “construction of two classrooms with office and store,” but investigation revealed that only a block of two classrooms without office and store was actually renovated by Wallmak Nigeria Ltd at the cost of N3,435, 493.64. One of the classes has been converted to a staff room while the other was demarcated into physics and chemistry laboratories and all structures in the school though dilapidated, were built by the PTA, without decent toilets and they need a face-lift.

The Principal, Mrs. Esther Agagak said the classes were taken because “teachers had no place to sit and the school had no laboratories to carry out basic experiments.” 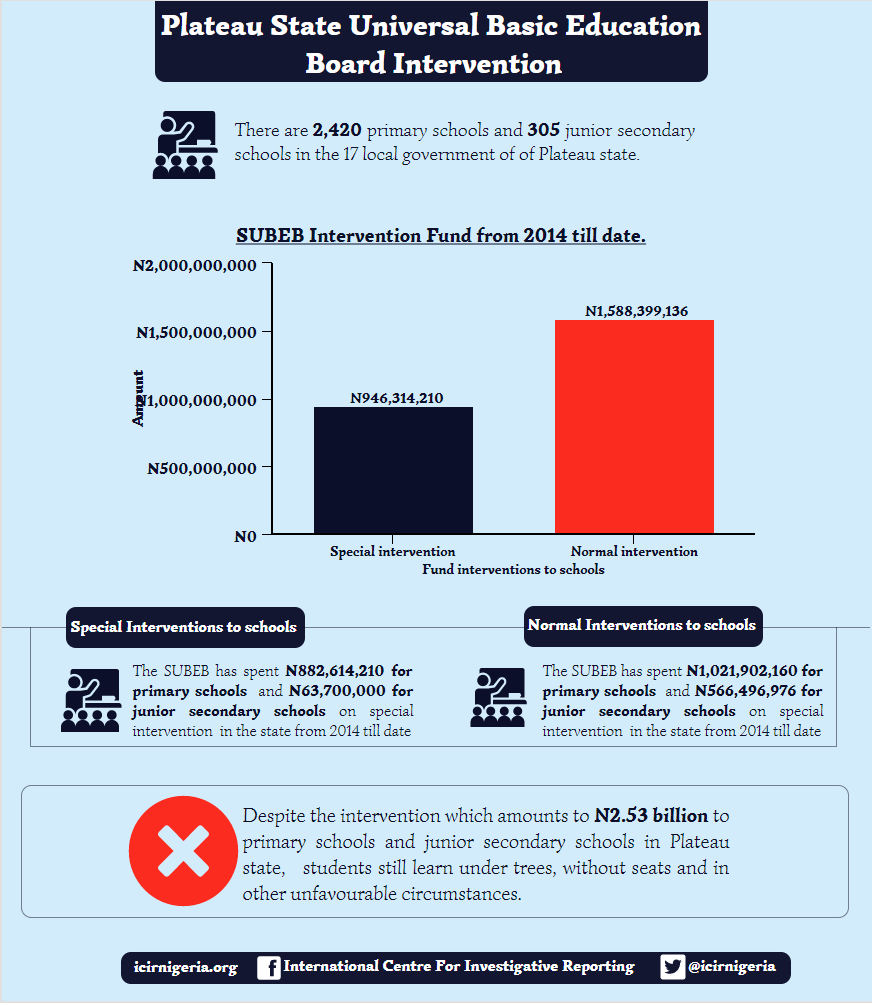 At GSS Nyango Gyel, a renovation of a block of two classrooms with office and store was awarded to Shingurum Enterprises at the cost of N3, 257,700. However, the roofing is nothing to celebrate as the building within a year is already leaking and SUBEB needs to not only overhaul it but also to build an examination hall where students can sit comfortably and write examinations.

Besides the said structure, all offices and classrooms in the school are leaking, the principal and teachers have to use buckets to collect the water whenever it rains, a situation that would damage students’ records if not addressed. As usual, all structures in the school were built through the efforts of the PTA, SUBEB only intervened in renovating a block of two classrooms as confirmed by the principal, Mrs. Hannatu Kallangs.

The situation was worse at Fuska Mata as the project “renovation of three classrooms with office and store” awarded to Kisit Consult at the cost of N2, 156, 042 was not done according to specification. The structure is also showing defects while others which have seen better days are begging for attention. Mrs. Dachen, the principal, expressed dismay at the level of neglect in SUBEB project intervention. This situation is having adverse effects on students because whenever there is cold, student population drops and corps members and temporary teaching staff who make the majority of the staff, cannot work according to the term’s schedule.

This lack of infrastructure is affecting population of public schools as school enrolment has continued to drop. In 2015, a total of 552, 359 were enrolled while in 2016, it dropped to 536, 850. In 2017, the figure reportedly dropped even further.  However, the Executive Chairman, Plateau State Universal Basic Education Board, Professor Matthew Sule, acknowledged the sorry state of infrastructure saying: “It is true, about 48 per cent of the infrastructural outlay; talking about classrooms were in very bad shape, 52 per cent of them were fairly in good shape so if you say children learn under trees and make-shift camps, I will not be surprised but we have significantly addressed the problem.”

He said the Board has renovated and also built over 400 classroom structures in two phases, adding that the intervention will continue as expectation is that no child should learn under trees or make-shift camps. He also agreed that classroom environment should be made very conducive.

For the contractors who execute shoddy jobs, the commissioner said government would revoke the contract and re-award it to other contractors. This was the case with the Demonstration Secondary School, Gindiri and at Daika in Mangu. Unfortunately, the government made no effort to recover the mobilisation fees from the defaulters, the only punishment being that no contract would be awarded to such companies again.

Sule stressed: “The moment we revoke a contract, we black-list because it means that you are not worthy to get our contract, and what is the guarantee that you won’t do the same thing if we give you another contract?” But all efforts to substantiate his claim of blacklisting contractors yielded no result as the Directorate of Planning, Research and Statistics refused to release the list of blacklisted contractors saying, “Is it necessary to make the list public?” However, a SUBEB staff who did not want to be named confirmed the issues raised and alleged that in the past, contracts were shared among top politicians who would send people to SUBEB for contracts. He said, however, since a petition was written on the issue and sent to the State House of Assembly, which set up a committee to probe the practice, such acts have reduced and there is more sanity now.

Explaining reasons why contractors get away with shoddy jobs, the source also revealed that SUBEB does not have enough competent staff and operational vehicles to monitor contract execution. But one of the contractors denied allegation that he did a shoddy job. Charles of Wallmak maintained that he had “documents to support whatever job we did. We document all our work, whenever I am around, I can give you whatever document you need but we did our job.

When asked why a shoddy job was executed at Fuska Mata, the Project Manager of Kisit Consult, Mr. James replied, “When last were you there? They wrote us a letter for maintenance and other things, so we had gone back and rectified those defects. Right now I am not in Plateau but I will speak with my boss and get back to you.”

The representative of Shingurum Enterprises who refused to give his name was less tolerant of the questions as he retorted: “Why are you asking me such questions? What has your work got to do with me? Go to SUBEB and find out whatever you want to know.”

Meanwhile, the Nigerian Union of Teachers, NUT Chairman of Jos North local government area, Joshua Bwede pointed out that “generally, we have infrastructure deficit in public schools though government through SUBEB is trying to address the issue but we still have problems. We have dilapidated classes, broken ceilings, broken floors, leaky roofs.

“The PTA is trying but their efforts are not yielding much because some parents do not take education as a priority so when you ask for let’s say N100 so we can maintain the building, hardly would you realize any reasonable amount to accomplish the plan and the children would not pay.

“You may see some schools with good structure, there are no chairs and the desks are not enough for the children to sit on, you know government will tell you no money, what they have is not sufficient to go round the schools.

“In the last three years, there improvement in school infrastructure has been very slow, once a government comes with its policy; another one would also come with its own policy instead of continuing with the former policy.”

This investigation was supported by the John D. and Catherine T. MacArthur Foundation and the International Centre for Investigative Reporting (ICIR).