In Borno, fuel-efficient stoves keep women out of danger 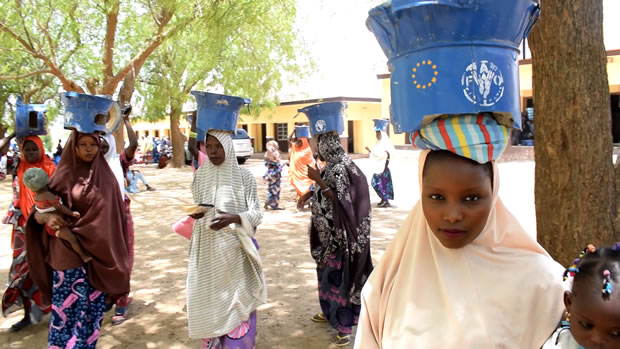 Facebook
Twitter
Pinterest
WhatsApp
For women in Borno State, one of the most terrorised states in North-East Nigeria, going into the bush to fetch firewood is like a suicide mission because of insurgency. The ICIR’s Niyi Oyedeji writes on how women are now embracing fuel-efficient stoves with support from a project by the Food and Agriculture Organization (FAO) funded by European Union.

Mohammed Aisha, 35, had been through troubled waters in her quest to fetch firewood to prepare meals for her family. Often, she returned home empty-handed after the adventure. She always knew the dangers lurking in the forest- she could be abducted or get killed by marauding terrorists.

Nevertheless, the firewood that Aisha, a mother of nine, usually gathered was hardly enough to prepare two-square meals for eleven persons.

The intervention, the turning point

Aisha, who relocated with her husband and nine children to Gongulong, Jere Local Government Area of Borno State, after being sacked by insurgents from her hometown, Monguno, in 2015, was full of joy on May 20, 2021, when she received a fuel-efficient stove from the Food and Agriculture Organisation (FAO).

“This will reduce the need to go out and get firewood under the constant fear of being kidnapped by Boko Haram,” an ecstatic Aisha told The ICIR.

She was one of the hundreds of women who recently benefited from the Safe Access to Fuel and Energy (SAFE) project of the FAO, an initiative targeted at providing clean energy and protection for women in the conflict-affected north-eastern part of Nigeria.

On her part, Muhammadu Sadia, 17, a food-seller in the outskirts of Maiduguri, said the fuel-efficient stove would not just aid her business but also save her from the risks of foraying into the forest to search for firewood.

Since she dropped out of school and embraced the food business, which her mother bequeathed to her, Sadia usually embarked on a torturous seven- to 10- kilometre journey in search of firewood, which she hardly got on most occasions.

“The forest is not only far but also unsafe,” she said, adding,  “in fact, we have stopped going because of the fear of being kidnapped.”

As the insurgency in the North-East grows, farmers and people who supply firewood have become targets of attacks. Sadia said the prices of firewood had gone up and were unaffordable for small-scale business owners like her.

But the new stove, she said, was already helping her to curb spending all her profits on firewood.

“This stove will really help me a lot, especially in stopping me from spending all the profits made from my food business on firewood.”

In Borno and other north-eastern states in Nigeria, Gender-Based Violence (GBV) is growing astronomically, particularly with the activities of the insurgency.

Whenever women in Borno State go to the forest searching for firewood, they are potential victims of attacks by the insurgents who often abduct them, sexually harass them or, in most cases, force them into marriage as slaves.

According to the data obtained from the 2013 Nigeria Demographic and Health Survey (NDHS), nearly three in 10 Nigerian women had experienced physical violence by age 15.

Twenty-year-old Bukar Fatmata told The ICIR that her heart was always in her mouth anytime she wanted to fetch firewood in the forest.

“Although the security officers always try to stop us from entering the bush to search for firewood, we have our ways of boycotting them,’’ Fatmata confessed.

‘‘When you go into the bush, you can easily be attacked by terrorists. They can take your money, rape or kill you. So we are always scared of going there.”

Before she was introduced to the fuel-efficient stove, the mother of two said she had resorted to cooking with cow dung as a way of avoiding going to the forest.

The World Health Organisation (WHO) says that 69 per cent of Nigerian households use solid fuels as their primary source of domestic energy for cooking; women and children, in particular, are at high risk of disease from exposure to household air pollution.

The WHO estimates that 95,300 Nigerians die annually from indoor air pollution.

Falmata admitted that cooking with cow dung usually affected her health and that of her child.

“As a nursing mother, I cannot withstand the stress of playing hide and seek game with insurgents in the bush,” she explained.

“That is why I cook with cow dung, but that usually emits terrible smoke that hurts my eyes and chest.”

Meanwhile, 22-year-old Yahaya Halimatu, who had been using the stove handed over to her by the FAO for the past three years, revealed how the stove had helped her to save some money.

“Apart from the fact that it emits less smoke, with N50 firewood, the new stove can do the work that only N100 naira firewood can do with the traditional cooking method.”

Since the launch of the FAO’s SAFE project in 2018, over 50,000 stoves have been distributed to Internally Displaced Persons (IDPs), returnees and host communities in Borno and Yobe states.

According to Abubakar Muna, a resident of Bama IDP camp, the stove had been a blessing to her since she received one from FAO in 2019.

“I have been using this stove for over two years now and I must tell you that it has really made cooking easier and enjoyable for me.”

Muna, who was residing in Gwoza town before the infiltration of terrorists, said that apart from the fact that the fuel-efficient stove emitted less smoke, it also reduced the time she spent cooking.

At IDP camps like Bama and others across the north-eastern part of Nigeria, firewood is a luxury many cannot afford. While only a few can afford to pay N100 to N200 ($0.24 -$0.48), an average cost of firewood, many families usually sell their belongings or portion of their food to raise money for it.

Bala Mariam, a Gubio IDP camp resident, said the FAO intervention was what saved her from cooking with unhygienic materials.

“I had let go of my shoe in exchange for firewood in the past. At the time, I was cooking with anything I could see around like plastics and corn shafts because I couldn’t afford firewood.”

The 30-year-old mother of seven said she often managed N100 firewood for a whole week because the stove given to her by FAO consumed less of it.

“Since I have been cooking with this stove, my beans now taste sweeter and cook faster,” Mariam told The ICIR.

Inside Gongulong workshop where fuel-efficient stoves are produced

In a bid to empower women and make the stove readily available to both the IDPs and the people of the north-eastern part of the country, the FAO has established three fuel-efficient stoves production centres in the region.

The ICIR visited one of the production centres, located at Gongulong, Jere Local Government Area of Borno State, where women were being trained and equipped with the necessary tools to work efficiently.

Women, who accounted for 80 per cent of the artisans working at the production centre in Gongulong, expressed their delight in not just working to earn a living but also producing stoves, thereby alleviating the burdens and pains of fellow women like them.

Bulama Falmata, 51, who has been working at the production centre for over three years, told The ICIR that the centre did not only serve as a form of employment for her but also enriched her pocket to buy food and as well send her children to school.

“I can now send my children to school to study; to proceed to secondary school. I have built a house of my own and can eat, drink and also engage in another petty trading,” said an excited Falmata.

The fuel-efficient stoves are made with locally accessible raw materials such as clay, mud and water, often sourced from the community.

This reporter watched how the clay was moulded, clad with metal and then left to dry in the sun and oven to make a finished product.

Aloba Bunde, 39, the coordinator of the artisans working in the Gongulong production centre, said that the centre produced 200 pieces of the stoves daily.

Bunde added that the production centre, local and international NGOs in Nigeria were actively participating in public biddings for the procurement and supply of the stoves by FAO and other UN agencies.

“We are just 23 working here. We don’t pay a salary; we only share the profit among ourselves.”

The inaccessibility to clean energy poses a risk to women globally, and Borno women are not left out in this.

The fuel-efficient stoves given to Borno people by FAO lessen the use of firewood and cut the amount of smoke produced, compared to the traditional cooking method. The stove also has the prospect of working with renewable material that has the tendency of producing little or no smoke.

The women, who spoke with The ICIR, said they were given one briquette each when the stoves were handed over to them by FAO.

According to the women, the briquette, made of agro-waste raw materials, discharged no smoke and was easy to use.

“The briquette emits no smoke and it is very easy to use. I really enjoyed it but sadly, I have been unable to get another one,” said Aisha.

Sadia, on her own, said she was ready to purchase more briquettes for her cooking needs but had been unable to get them.

This reporter, however, visited the briquette production centre, which was still under construction.

Aminu Zakari, the FAO programme officer in charge of  climate change and energy, said that the briquettes would be produced in larger quantities to solve the women’s needs.

He added that like the fuel-efficient stove production centre, the majority of those who would be employed to work at the centre would be women.