IN this report, Mustapha Usman looks at how a non-governmental organisation (NGO) is giving women in Nigeria a new lease on life after being disabled by incontinence caused by obstetric fistula.

After Hauwa Sabo, 30, endured hours of prolonged labour marked with excruciating pain at home, she knew that she needed to go to the hospital. However, she lives in a remote area far away from the nearest hospital. She would eventually get to a hospital in Gezawa, a town in Kano state, but by then, the damage has been done.

Sabo had her baby, but she could not stop passing urine. She had obstetrics fistula, a medical condition in which a hole develops in the birth canal due to childbirth.

This she lived with for several years until she heard on the radio about Fistula Foundation Nigeria, an organisation that funds treatment and care for people in her condition.

She traced the organisation to Kano and was treated for free she told The ICIR.

For the first time in several years, she was dry. At the time of the interview, Sabo is on the ‘follow-up’ scheme of the organisation.

Data from the World Health Organization shows that about 50,000 to 100,000 women worldwide are affected by obstetric fistula annually this is mainly in developing countries in Asia and Africa.

The health body says that obstetric fistula is preventable. it can largely be avoided by: delaying the age of first pregnancy; the cessation of harmful traditional practices; and
timely access to obstetric care.

Unlike Hauwa, Amina Rabiu, 47, was 15 when she got married. She developed a fistula after her first delivery at 17. Because of the constant urine leakage, her husband divorced her.

Aside from constant incontinence, women who experience obstetric fistula also suffer shame, social segregation and health problems, says the WHO.

This was true for Rabiu. She got married thrice and has been divorced thrice because of incontinence.

“I lost all hope of getting better. I faced a lot of insults; I was stigmatised by even close relatives. In fact, I hardly got any accommodation,” she said.

“My first husband divorced me and said he would be marrying a healthier woman because I was unhealthy. I married three men, but all divorced me due to the fistula. When it started, I was living with my aunt here in Panshekara; when they knew of my condition, how I consequently had urine leakage, they stopped me from using their toilet and referred me to their animal house, and that’s where I kept easing myself,” she added.

With no husband and no means to support herself financially, the quality of her life deteriorated until she heard of the Fistula Foundation of Nigeria where she got treated.

The Zamfara state coordinator of a fistula programme of a different NGO – Engender Health, Rakkiya Alhasan, told the press that early marriage is one of the major causative factors of the fistula cases they receive. She confirms this is the case for many of their patients who are girls between 16 and 20 years old.

She added that they also have cases which resulted from obstructed labour handled by unskilled birth attendants.

Obstetric fistula could take several forms, and sometimes more than one could happen at once, says the International Continence Society, a UK charity with a global health focus on the development in the field of incontinence. The types, according to the organisation, are:

Musa Isa an indigene of Nasarawa LGA, Kano state says he founded the Fistula Foundation Nigeria over three decades ago after witnessing how women who are affected are stigmatised and abandoned.

It started in 1988 as the Association of Fistula Clients and later changed to Fistula Foundation Nigeria.

Speaking on the approaches and steps in executing these projects, Musa told The ICIR that the NGO has four core approaches – prevention, treatment, social integration and follow up.

“We are working through four main approaches: Prevention; for prevention, we do community mobilisation and behavioural change communication activity to prevent fistula and other cases from developing. We also sensitise community members on the causes of fistula and also do media engagement and advocacy with policymakers and the community’s gatekeepers.

“The second one is treatment. We work and get fistula patients where they can achieve quality repair in an environment of support. We also create an enabling environment for fistula surgeries in designated Fistula treatment centres in Nigeria. Then we support numbers of the surgical team, supply of theatre equipment, procurement and supply of consumables and drugs.

“The last other two are: social integration and follow up.”

“In the area of Prevention, we were able to train the community’s educators. We tried to identify areas that have a large number of fistula in Kano, Katsina and Sokoto state. In Kano state, there are three LGAs, Gisawa, Nasarawa and Gwarzo. In Katsina, we have Dera, Kankara and Gorsu and in Sokoto, we have Tambuwal, Tangaza and Goronyo.

“These are areas where we found the prevalence of fistula. What we do there to prevent fistula is that we train people and community educators to pass the knowledge across. We have like 60 people, 20 are men, and 40 are women. Amongst the 40 women, 20 are survivors of fistula who are capable of going from one house to another to mobilise women in the community about the importance of maternal healthcare and hospital deliveries. And we also educate men to support their wives during pregnancies and delivery.”

Isa says they have also trained doctors through an establishment with the support of United Nations Population Funds, (UNFPA), “We trained 38 doctors in basic levels and 16 doctors in advanced levels on how to manage obstetrics fistula including Nurses. We also trained 600 health workers in Bauchi state and another 300 in Sokoto state on strategies to prevent obstetrics fistula during childbirth.”

Isa Usman told The ICIR that he is, one of the beneficiaries of the training held in 2019.

Usman, who works as a surgeon at Maryam Abacha hospital in Sokoto, says, “First of all, they noticed that we lacked trained surgeons, not only in Sokoto but in Nigeria at large. So, they made it part of their plan to train surgeons. They took two doctors and four nurses in Sokoto and some other states and had our training in Bauchi.”

The ICIR gathered that the NGO gets support from UNFPA and Fistula foundation, California. This was not the case at the onset, says Isa, “When we established this Fistula foundation, the funding was from our pockets. UNFPA came into Kano in 2005, and at that time, I was working with the Kano state Government. So, we partnered and received funding from UNFPA. We have, however, been getting funding from them since then. Besides that, we receive funding from Fistula Foundation, California purposely for fistula patients during rehabilitation”.

Hussaina Abdulhamid, 22, who lives in Dawakin Tofa LGA of Kano state, about 24 kilometres away from the foundation partner hospital, wasn’t divorced by her husband. She was, however neglected and left to battle the incontinence. She felt alone.

“I had a rest of mind when I saw that there were many patients with fistula,” Abdullhamid tells The ICIR about her encounter at the health facility.

Hafsat Aliyu, also shares a similar experience. “I was diagnosed with fistula when I had my first delivery. After the delivery, I discovered something was leaking from my private part, so I was referred to Murtala hospital for free fistula treatment.”

Her free treatment was funded by the organisation.

Not everyone is fortunate to become dry after undergoing treatment. The foundation founder Isa says, “from 2019 to date, we were able to support the surgeries of over 5,876 women who are fistula patients, and the most important thing is that 95 per cent of these women are completely dry”.

All hope is not lost for the five per cent as the foundation offers training and support for those who remain incontinent.

Beyond treatment, the foundation equip patients with skills, implements and start-up capital to aid the economic status of the women.

Abdulhamid got a sewing machine after undergoing the skill acquisition in tailoring. This is one of the many options the women select from. 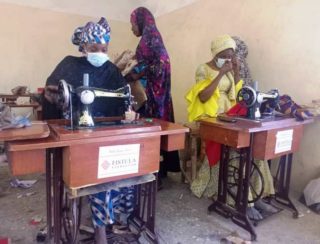 Ebilatei Ebipatei, 31 years old, is another beneficiary of the skill acquisition training after she underwent surgery funded by the organisation in Calabar state.

She told The ICIR, “We were exposed to some soft skills acquisition and were given funds to start a business.”

Isa, on the limitations, says,” One of the issues is insecurity. There are some places that we can’t go to because of insecurity. For example, Goronyo is one of the places where there are serious insecurities. We went there twice but couldn’t risk going there again.”

On the issue of access to remote communities, he tells The ICIR “We have gotten many requests from remote areas, but we couldn’t take our advocacy projects because of the limited logistics.”

Usman the fistula surgeon who was one of the training beneficiaries believes the holistic approach of organisations like FFN that take into cognisance sensitisation, economic aspect and not just the health aspect can help reduce Nigeria’s fistula burden.

Nigeria is one of the top countries with global maternal mortality. This makes it a dangerous place to give birth.

Informed by the global call by UNFPA in 2003 to eliminate obstetric fistula, Nigeria has articulated and implemented several National Strategic Plans aimed at addressing the problem.

With an annual incidence of 12, 000 cases and a backlog of 150000 cases, obstetric Fistula (OF) is a major public health problem in Nigeria says the opening of the executive summary of the current strategic plan, which covers 2017 – 2022.

A nurse at Bingham Hospital in Jos,  Blessing Isaac, says, “The best solution is to educate parents and teenage girls about the danger of early marriage. Encouraging pregnant women to go for ante-natal discourages women of childbearing age from giving birth at home or with the support of traditional birth attendants.

This story has been supported by Nigeria Health watch through the Solutions Journalism Network, a nonprofit organisation dedicated to rigorous and compelling reporting about responses to social problems, solutionsjournalism.org

THE Nigerian and Moroccan governments have teamed up with five West African countries to...

THE All Progressives Congress (APC) Presidential Campaign Council has faulted the manifesto of Labour...
Advertisement