Dispatches From North East
By Editorial On May 5, 2016 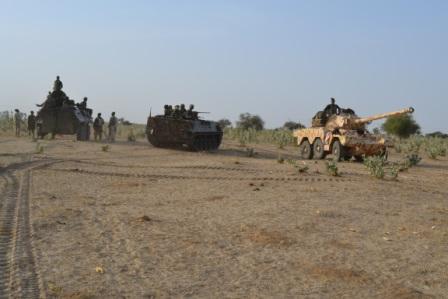 The Nigerian Army on Thursday said its men involved in Operation Crackdown in Sambisa Forest, a code name for clearance and rescue operations in the dreaded forest, came under attack while on harbour by suspected members of Boko Haram.

According to a statement issued by army spokesperson, Sani Usman, the attackers came around 7:00pm in five Toyota Hilux vehicles fitted with anti-aircraft guns, but were repelled by battle ready troops who rose to the occasion and pursued the terrorists as they withdrew in disarray towards the river line of Izza-Mainyakare axis.

The troop sustained no casualty in the attack that lasted for about 40 minutes but an unconfirmed number of Boko Haram terrorists were killed. The troops also recovered an 81mm mortar tube from the terrorists. The statement said the troops would continue with the clearance operation and maintain high level alertness and vigilance at the harbour area.

In another development, the army said troops of 7 Division, acting on a tip off on Wednesday carried out special operations at Chingurimi, Walasa and Masa villages suspected to hold large numbers of abducted women and children. Troops were able to rescue 17 women, an old man and 24 children.

“The troops killed quite a number of Boko Haram terrorists and rescued 17 women, an old man and 24 children at the area. They also recovered 1 AK-47 rifle, 6 rounds of  7.62mm, 295 rounds of 7.62mm (NATO), 12 Dane Guns, 21 unserviceable mobile telephone handsets and one serviceable as well as150 different SIM cards,” the army said, adding that the total number of rescued persons were more than 400.