If you vote, you will die, IPOB threatens Anambra citizens 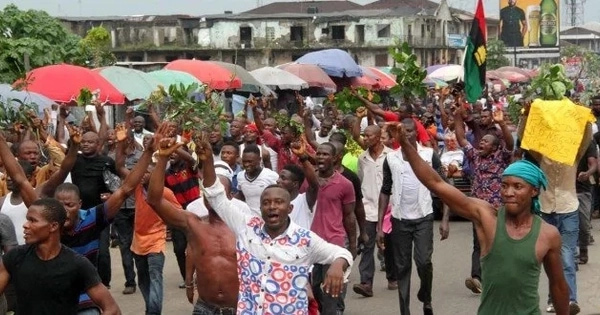 The proscribed Indigenous People of Biara (IPB) says anyone who votes in the governorship election scheduled to hold in Anambra State on November 18, will die.

Hundreds of members of the group took to the streets of the commercial city of Onitsha, on Friday, in a march which they said was intended at letting the federal government know that the group is still alive.

“We are in Onitsha to tell the Federal Government to produce Kanu. They should release all the Biafrans in Nigerian prisons.”

Videos of the protest have since gone viral on the social media.

Emma Powerful, IPOB’s Media and Publicity Secretary, told newsmen the group will not be deterred from achieving a Biafra Republic.

“Today in Onitsha, we broke the python Buratai, Ohanaeze, Obiano and Igbo governors brought to our land,” Powerful basted.

“Anybody doubting the resolve of IPOB under the supreme command of Nnamdi Kanu is mistaken.

“We will put Anambra State on lockdown on November 18. This is a taste of what is to come. Nigeria should be prepared.”

Emma said if citizens of the state refuses to vote in the coming election, the federal government would have no other option than to fix a date for a referendum on Biafran independence.

However, security agencies, including the Police and the Army, say everything has been put in place to guarantee a free, fair and safe election come November 18.

Nkeiruka Nwode, Public Relations Officer, Anambra State Police Command, said the IPOB march has no effect, insisting that the state police command had concluded arrangements for effective policing of the state during the election.

She asked residents of the state to go out en masse to exercise their franchise on the day of the election.

Also, Jimoh Moshood, the Force spokesperson, warned the IPOB members not to interfere with the election process in their own interest, adding that the police would deal with them “the way an outlawed group should be dealt with”.

“They (IPOB) should steer clear of Anambra because we have deployed enough personnel in the state; any miscreant who misbehaves would have himself to blame as he would be dealt with. IPOB should not test our will or resolve,” Moshood warned.

Speaking in like manner, Sagir Musa, spokesperson for the 82 Division of the Nigerian Army, which covers the South-East region, said troops have been placed on alert to tackle any breakdown of law and order during the election.

“The troops are always on ground to prevent any breakdown of law and order during the election. As you know, the police are the first line of security and we cannot usurp their role,” Musa said.

“We have mastered the areas and we are familiar with the hideouts of the troublemakers.

“All these preparations will count for the troops on Saturday. But the army cannot deploy its troops unless the security situation degenerates, which is not anyone’s wish.”

Also the Nigeria Security and Civil Defence Corps (NSCDC) has deployed 5000 armed and unarmed personnel to Anambra State for the election.

FACT CHECK: Claim that Anambra’s debt profile is over N200bn…