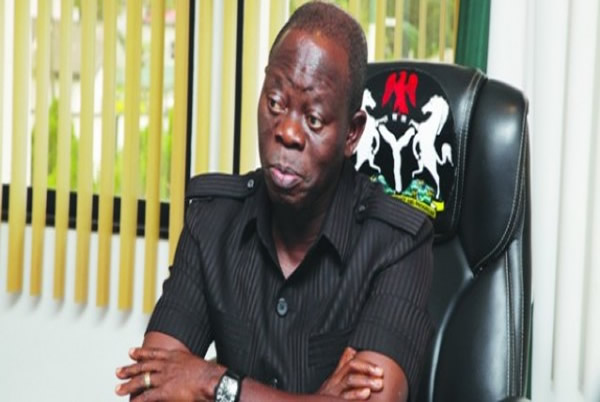 The Speaker of the Edo State House of Assembly, Uyi Igbe, and the Majority Leader, Philip Shaibu, have been arrested and detained by the police in Benin over the violence unleashed on the lawmaker representing Etsako West Constituency 1, Abdulrazak Momoh, who is currently in a critical condition in the hospital.

As if to compound their problems, Igbe and Shuabihave also been summoned to appear before the Economic and Financial Crimes Commission, EFCC, in Abuja next week Monday.

The reasons for the summon is yet to be known, but the Action Congress of Nigeria, APC raised an alarm over alleged plan by the Peoples Democratic Party, PDP-led federal government to imprison all loyalists of governor Adams Oshiomhole.

Momoh was allegedly attacked by hoodlums after he disobeyed the order of security men at the gate of Edo State legislative quarters not to go in by climbing over the perimeter fence.

Following the attack, the state leadership of the PDP accused the Majority Leader and other APC lawmakers of masterminding the attack.

Shaibu, however, denied the allegation, describing it as completely baseless.

Efforts made by newsmen to speak with the Commissioner of Police on the development proved unsuccessful.

The Majority Leader who spoke to newsmen at the command headquarters, said they had come on their own volition but lamented that they were detained over an issue they knew nothing about.

Shuabu alleged double standards on the part of federal agencies in the crisis at the state Assembly.

“The EFCC has also invited us to Abuja on Monday.‎ You could see the intimidation. When the PDP lawmakers including Momoh forcefully broke into the Assembly complex, the police did not invite them not to talk about arresting them. All the court orders that were issued against them, none were obeyed, the police never did anything to enforce court orders. But you can see we have been detained here since for an issue we know nothing about”, Shaibu said.

“This is an attempt to intimidate and eliminate all Oshiomhole’s loyalists before the elections”, he further stated.

Reacting to the incident, the All Progressive Congress, in a statement signed by its publicity secretary in the state, Godwin Erhahon, said they were aware of the plans of the PDP to arrest, maim, and eliminate those perceived to be loyalists of the state governor.

“We want to warn that any attempt to intimidate our people in Edo state will be resisted. The PDP cannot use Federal might to hunt our people. We are still battling Boko Haram, let us not face another war in Edo state, it might be too much for Jonathan to handle,” Erhahon declared.