Simon Ateba, reports on the lot of Nigerian refugees in Cameroon and Chad

As heavy rain fell on August 28, many refugees stood under a temporary shelter barely covering their heads and upper bodies at the Minawao camp in Cameroon’s far north region.

Their legs were wet and stained as drops of water hit the ground and lifted mud onto them. They wrapped their arms around their chests to shield themselves from the peltering cold.

The new sets of refugees had arrived from North east Nigeria where a Boko Haram insurgency has wreaked havoc since 2009, and their belongings were still scattered on the muddy ground as they waited desperately to be admitted into the unfenced camp located in the bush, seven kilometres from the nearest tarred road.

It was a familiar scene to gendarmes protecting the camp and humanitarian aid workers catering for the ever growing number of Nigerians rendered helpless by the insurgency.

That insurgency has killed more than 23,000 people since it began six years ago and displaced 2.3 million others in Nigeria, Cameroun, Chad and Niger since May 2013.

In the past five months alone, 500,000 children have been uprooted, bringing the total number of minors on the run in Nigeria and neighbouring countries to over 1.4 million. Many of these children are out of school.

As the violence persists, fathers, mothers, children of all ages and families of all economic backgrounds flee from towns and villages under attacks and attempt to cross the Nigeria-Cameroon border.

Those who are successful arrive there tired, sick, hungry, thirsty and desperately looking for help.

The displaced persons first spend weeks or months in Cameroonian villages or towns along the border and then trek for several more weeks or even months to reach the Minawao camp where 96 percent of the population comes from Borno State, two percent from Adamawa State and another two per cent from elsewhere.

There at the Minawao camp, stranded in the bush of Cameroon’s far north region, and surrounded by a hostile environment with a weather that easily switches from too hot to too cold, about 45,000 refugees live in makeshift shelters, 70 kilometres from the border with Nigeria in the district of Mokolo, the department of Mayo-Tsanaga. 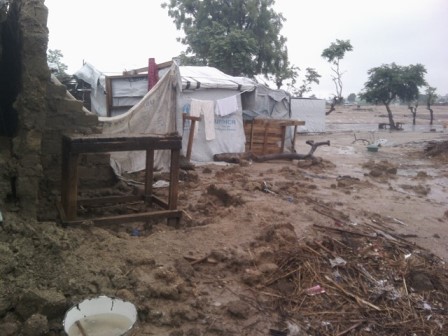 The refugees, most of them women and children (53 percent of the population in the camp consists of women, while 61 percent are children under the age of 18 years of age) arrive with no money, food, water or even clothes other than the ones on their backs. On arrival, it takes them many days to be screened before they are admitted into the camp and several more days to receive their first ration of food, water or medication as many arrive there sick.

They wait for many more days to receive utensils, blankets and any other basic thing from the United Nations Refugee Agency, the UNHCR, which has run the camp since 2013. Until that happens, they fend for themselves or hope that those who have been in the camp for a longer period will share from their little leftovers, if there is any.

The location of the unfenced camp makes many refugees fear possible attacks from wild animals or even from potential invaders as the camp has only one police post with about ten gendarmes protecting tens of thousands of people. 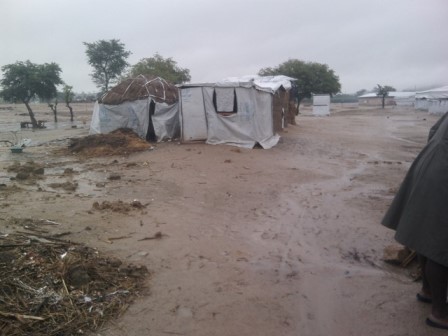 Because instability has persisted in North east Nigeria for six years and many areas had fallen into the hands of Boko Haram for a long time, the health system has nearlycollapsed and many of the refugees had been living without proper medical care for years. They arrive sick and in need of medical check ups. As newcomers flock in, the pressure on the health services at the Minawao is increasing.

In August, about 2,671 women had serious medical complications while 1,007 persons who were living with various disabilities had no wheelchairs and walking aids, hearing and vision aids, artificial limbs and surgical appliances as well as communication aids.

There were also no elastic stockings, appliances for colostomies, some types of trusses or wound dressings, urinary catheters, pressure relieving cushions and mattresses or continence pads for people with disabilities.

The main hospital in Mokolo district where the camp is located did not have equipment to cope with patients with special needs nor were there qualified medical personnel there to efficiently monitor the 269 refugees who have been suffering from mental illnesses.

There were also in the camp more than a thousand elders with various health challenges. With the rainy season, overpopulation and scarce water, there were fears of a cholera outbreak.

As at August, the camp had two health centres with not many beds and one maternity unit. It had only 2,555 toilets for all the refugees. This had some health implications, especially because each refugee has right to only 17 litres of water every day to drink, cook, wash and bath.

The Minawao camp was established in 2013 to house up to 20, 000 people escaping Boko Haram violence in North east Nigeria, but with no end to the conflict in sight, there were, as at August 18 this year, 44, 889 Nigerian refugees crowded in the camp and sharing 11,954 shelters.

A minimum of four persons were sharing each shelter, but about 5,000 refugees still lived in classrooms and community shelters, and many displaced persons remained stuck in border towns and villages with no international help. 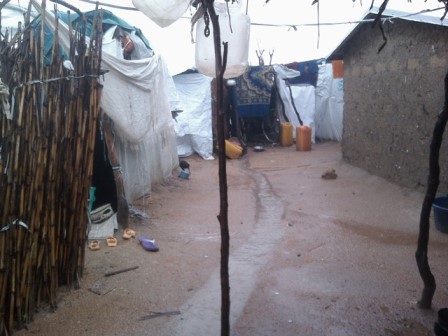 Between January and August, more than 22,000 new refugees had already been registered, and by the end of the year, it is projected that the number of refugees in the camp may shoot up beyond 50,000 people.

And as more people troop into the Minawao camp and the surrounding bushes and classrooms, the needs of these new arrivals are growing fast but the availability of basic services such as the provision of water, sanitation, education and food is shrinking and the living conditions of refugees are worsening.

Médecins Sans Frontières, for instance, is struggling to bring in new staff to give more consultations, vaccinations and treatments.

Cameroonian curriculum, not Nigerian, is taught as there are scarcity of good teachers who could provide education in English. Teaching equipment and learning materials such as exercise books were also missing and the number of classrooms is not enough.

The 79 unaccompanied children who lived in the camp as at August 28 away from missing or dead parents were also a concern to humanitarian workers.

For now, the capacity of the Minawao camp has reached its limits and new needs have been created.

The fresh needs include the construction of shelters at a new camp to decongest Minawao and accommodate newcomers, the deployment of more security operatives from the current single security post, the supply of more water as well as the implementation of new measures to prevent cholera outbreak among others.

These challengers are worsened by the dilapidated road between Zamai, the nearest town, and the camp. Many trucks had broken down along the way with provisions in them and many humanitarian aid workers had been stranded and forced to turn back as they were trying to reach the camp. The road is often over flooded during rainy seasons and our correspondent had to be carried by two men to cross some parts of that road.

The increased needs, however, require enormous resources. But money is what is lacking the most, UNHCR says.

In its “2015 Refugee Response Plan” interagency report, made available on August 9, and which covered the period between  20 and 26 July 2015 , the UNHCR and partnering agencies disclosed that out of 62.7 million dollars needed to tackle the refugee crisis in Cameroon, only 29 percent of the cash has been made available.

“What is really worrisome is that despite the growing number of refugees and their needs, donors do not seem to understand the urgency,” an official said.

The investigation was cut short as Simon Ateba was arrested on 28 August and kept in a cell for three nights and day on suspicions that he was a spy for Boko Haram.