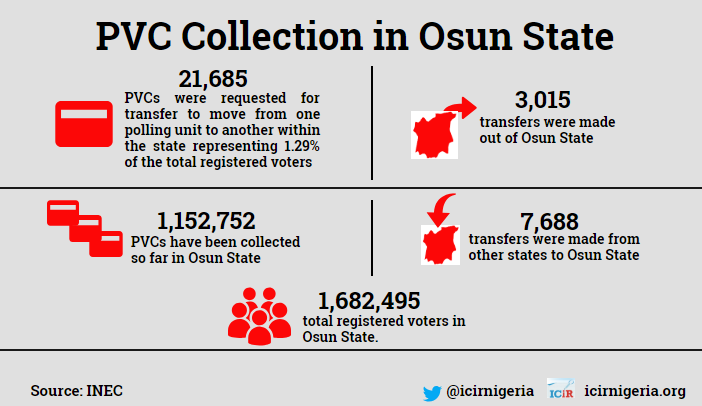 Over I.6 million new voters have been registered ahead of the Osun State governorship election slated for September 22, and out of this number, 1.1 million Permanent Voter Cards so far have been collected.

INEC made this announcement on Thursday during the distribution of voters’ register at INEC state office, Osogbo, the capital city.

While delivering his opening remarks,   the Resident Electoral Commissioner (REC) in Osun, Mr Segun Agbaje, said the register is for the purpose of observation and to check for issues that need to be addressed.

According to the INEC record,  the total number of registered voters is 1,682,495 and the PVCs collected are 1,152,752. About 30 per cent of voter registrants have not yet collected their PVCs.

To further increase the number of voters, Agbaje said PVC distribution would continue at ward level between 30th August and 7th September.

The Commission has also assured people of the state that the election would be credible. Vote buying is going to be fought seriously in Osun election, said the National Commissioner in charge of South-west and Chairman of the Information and Voter Education Committee ( IVEC), Prince Solomon A. Soyebi.

All political parties have been informed to submit the list of agents to INEC not later than September 8.