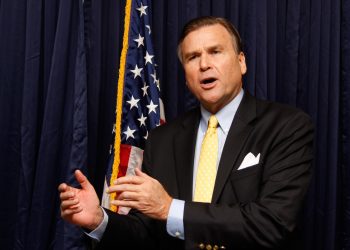 UNITED STATES Ambassador to Nigeria, Stuart Symington on Monday, advised candidates who participated in the February 23 presidential election to stay committed to the peace accord.

Symington, who observed few cases of violence during the poll, asked the candidates to persuade their loyalists to shun violence or any attempt to interfere with activities of the Independent National Electoral Commission (INEC).

“As noted by many observer groups in their preliminary reports, this election was predominantly peaceful, and it was a proof of the Nigerian people’s resolute commitment to choose their leaders.

“The peaceful achievement of millions was shadowed by the violence of a few. We extend our deepest sympathy to the families of those who lost their lives, and we urge all candidates to honour the peace accord they signed.”

According to the electoral body, 73 presidential candidates contested in the election.

In a statement issued by the verified handle of the US Embassy in Nigeria, the envoy emphasised need to respect the electoral umpire as the sole government commission responsible to announce the 2019 presidential election result.

Statement by U.S. Ambassador W. Stuart Symington on the Nigerian Elections – https://t.co/ytqd0F0oQX All should convince those who support them to refrain from using force or violence to interfere with INEC. #NigeriaDecides2019 pic.twitter.com/TMRYldUYFs

Chairman of the National Peace Committee, former Head of State, Abdulsalami Abubakar, had stated that the peace accord signing was organised to ensure peaceful conduct of the general elections.

“No one should break the law by announcing results before INEC does, or break the peace by claiming victory before the results are final. Everyone has a common interest in showing patience as INEC collates and announces the election results,” it stated further.

So far, the ruling party, APC has won six states from six announced by the electoral commission.