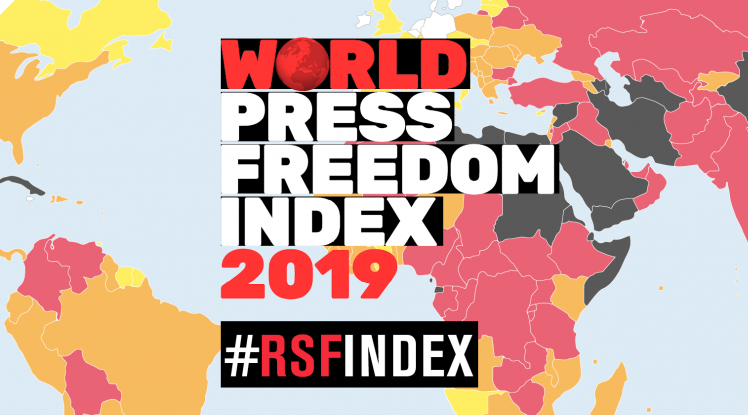 NIGERIA has been ranked in the 120th position on the global press freedom index which is published by Reporters Without Borders, also known as Reporters Sans Frontieres (RSF), dropping one step from the 119th position it placed in 2018.

A total of 180 countries were captured in the survey with Norway ranked as the best country in terms of press freedom, and Turkmenistan, the worst.

The survey noted that Nigeria, “Africa’s most populous nation has more than 100 independent newspapers and yet covering stories involving politics, terrorism or financial embezzlement by the powerful proves problematic”.

“Journalists are often threatened, subjected to physical violence or denied access to information by government officials, police and sometimes the public itself,” the report read.

The “unprecedented level of disinformation” spread by officials within Nigeria’s two major political parties during the 2019 general election was also cited as one of the reasons Nigeria dropped to 120th position.

According to the RSF survey, Nigeria is ranked 35th in Africa behind countries such as Congo Brazzaville, Mozambique, and Angola.

The top ten countries where the press is most free,  according to the survey, are Norway, Finland, Sweden, Netherland, Denmark, Switzerland, New Zealand, Jamaica, Belgium, and Costa Rica.

The United Kingdom placed 33 and the United States of America was ranked 48.

“Journalists around the world are seeing increased fear and violence in their line of work as media freedom faces further decline,” the report read in part.

The media climate in the 180 countries surveyed were classified under four categories namely,  problematic, difficult, very serious and good, and according to the researchers, only eight per cent of the countries analysed have a media climate considered “good”.

“Democracy is in great danger. Halting this cycle of fear and intimidation is a matter of the utmost urgency of all people,” said RSF secretary-general Christophe Deloire.

The major tragedy that befell the media community in 2018 was the murder of Jamal Khashoggi, a Washington Post columnist and longtime critic of the Saudi Arabian regime. Khashoggi’s murder in the Saudi Arabian embassy in Istanbul had triggered global concern over further deteriorating press freedom across the globe.

Transform your promises into action, CAN urges Buhari over Leah Sharibu’s release

Kennedy Agyapong: Ghanaian lawmaker who threatened journalist before he was murdered

ICIR advocates for collaboration between CSOs and media in Ghana