2020 Budget: Only 13 per cent of federal government debt to be serviced, inspite of N1.5 trillion new borrowing

THE federal government is to service its debt with N2.7 trillion,  an equivalent of 13 percent of its debt in spite of its plan to borrow another N1.6 trillion in the 2020 fiscal year.

Data from the Debt Management Office show that Nigeria’s public debt portfolio stands at N25.7 trillion naira as of June 30, 2019. The Federal Government owed N20.42 trillion, while the 36 states and the Federal Capital Territory owes about N5.28 trillion.

For the Federal government debt of N20.42 trillion, external debt has a share of $27.16 billion (N8.32 trillion), while N17.38 trillion is borrowed domestically.

A categorical breakdown of the federal government external debt shows that debt under commercial (Euro bonds and diaspora bond) has the highest of $11 billion. Debt from multilateral has $8.68 billion, Bilateral (China Exim Bank, JICA, India, and KFW) has $3 billion. 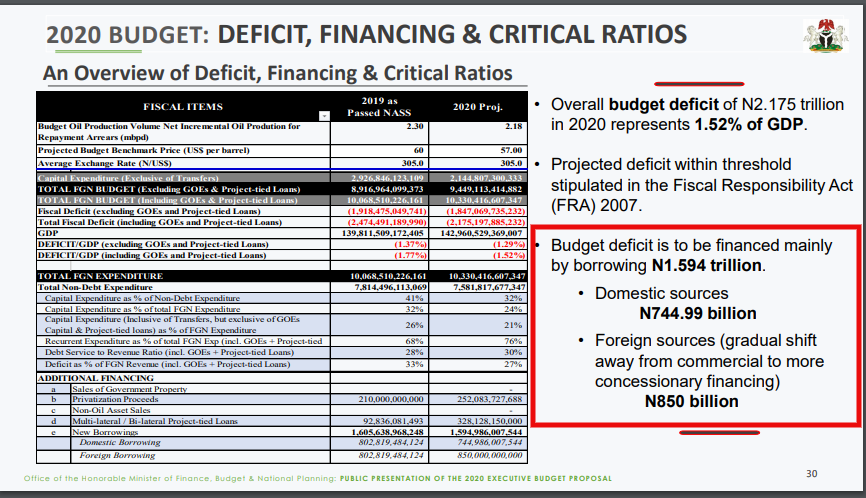 Despite the increasing debt profile of the country, the federal government has planned to make another borrowing of about N1.6 trillion to finance mainly the 2020 budget deficit of about N2.18 trillion. The highlights/breakdown of the 2020 executive budget proposal presented by the Zainab Ahmed, Minister of Finance, Budget and National Planning shows that the federal government will borrow N744.99 billion from domestic sources and N850 billion ($2.78 billion) from foreign sources.

Chat us on WhatsApp
Advertisement
Previous article157,000 Nigerians died from tuberculosis in 2018, report reveals
Next articleAgain, 147 victims rescued from “torture centre” in Kaduna