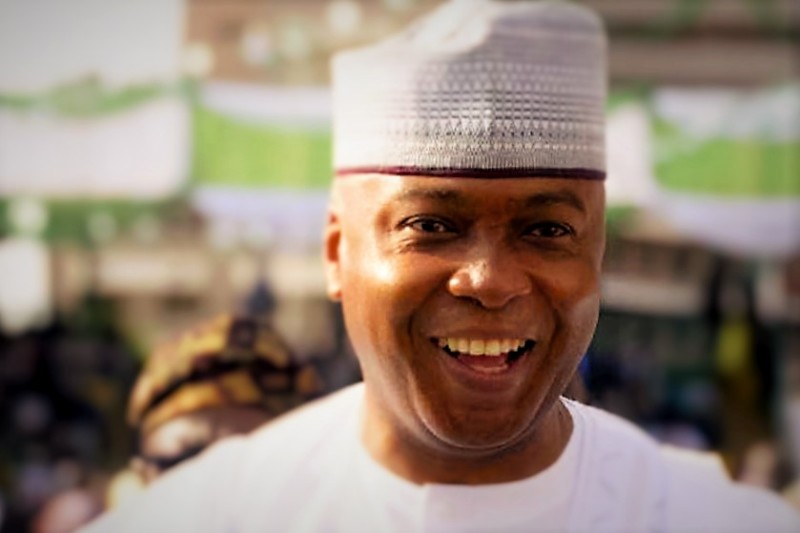 A FORMER Senate President Bukola Saraki has joined the 2023 presidential race on the platform of the Peoples Democratic Party (PDP).

Saraki announced his intention to contest the presidential ticket of the PDP in a post on his official Facebook page.

The former Kwara State governor said he has a strong record of delivering and experience in making tough decisions. 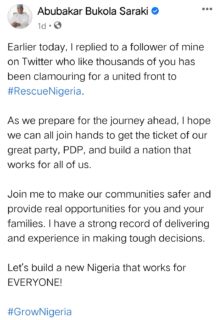 He wrote, “Earlier today, I replied to a follower of mine on Twitter who, like thousands of you, has been clamouring for a united front to #RescueNigeria.

“As we prepare for the journey ahead, I hope we can all join hands to get the ticket of our great party, PDP, and build a nation that works for all of us.

“Join me to make our communities safer and provide real opportunities for you and your families. I have a strong record of delivering and experience in making tough decisions.

“Let’s build a new Nigeria that works for EVERYONE! #GrowNigeria.”

Saraki, born on December 19, 1962, also aspired to become president of Nigeria in 2019 but lost the PDP ticket to Atiku Abubakar.

He was governor of Kwara State for two terms, from 2003 to 2011, when he was elected to the Senate, representing the Kwara Central Senatorial District on the platform of the PDP.

He defected to the All Progressives Congress (APC) before the 2015 general elections. He was re-elected to the Senate before eventually emerging Senate President on June 9, 2015, after being elected unopposed by an alliance of PDP and APC Senators.

Saraki’s emergence as Senate President was against the wishes of President Muhammadu Buhari and the national leadership of the APC. During his reign, the Senate had a largely fractious relationship with the executive arm of government.

Saraki left the APC and returned to the PDP on July 31, 2018, after which he came under intense pressure to resign his position as Senate President.

The APC caucus and then national chairman of the party Adams Oshiomhole threatened to remove Saraki as Senate president.

But Saraki eventually survived attempts by the APC leadership to have him impeached as Senate president.

It was expected that Saraki would be impeached when the Senate resumed from recess on October 9, 2018, but the impeachment plot failed to materialise.

Saraki eventually contested and lost the PDP ticket for the 2019 presidential election after declaring his intention to run for president.

Saraki is synonymous with corruption allegations, starting from his time as a director of Société Générale Bank Nigeria (SGBN) Ltd.

The Economic and Financial Crimes Commission (EFCC) accused directors of the bank of mismanaging investors’ funds.

In July 2021, the EFCC confirmed that Saraki was invited for questioning over allegations of corruption and money laundering.

Saraki later dragged the EFCC before an Abuja Federal High Court to query the legality of allowing the anti-graft agency to investigate him over allegations he said were part of the charge upon which he was previously docked before the Code of Conduct Tribunal (CCT).

Justice Anwuli Chikere of the Abuja Federal High Court, presiding over the fundamental right enforcement suit filed by Saraki against the EFCC in November 2021, stood down from the case and returned the case file to the case the Chief Judge for re-assignment to another judge.

The judge explained that she was about to retire.

In 2015, the Code of Conduct Bureau (CCB) had filed a 13-count charge against Saraki for false declaration of assets.

The CCB alleged that Saraki failed to declare all his assets and made an ‘anticipatory asset declaration’ while governor of Kwara State in 2003.

It is believed that the anticipatory asset declaration was done with the intention to loot in the future.

Saraki was arraigned over the false asset declaration charges at the Code of Conduct Tribunal (CCT) in Abuja in September 2015.

He denied the charges.

The EFCC also filed charges against Saraki before a Lagos Federal High Court, alleging that he (Saraki) spent N1.09 billion, allegedly stolen from the coffers of Kwara State, to purchase two houses in Lagos while he was the state governor.

Saraki spent most of his tenure as Senate President battling corruption trials and allegations that sprang from his time as governor of Kwara State.

Also, Saraki was invited by the Nigerian Police for questioning when, on April 5, 2018, armed robbers attacked five commercial banks in Offa, a town in Kwara State.

About 30 persons, including police officers, were killed in the attack.

Saraki will likely answer many questions concerning lingering corruption allegations as he steps up his campaign to become Nigeria’s next president.

Saraki’s presidential ambition also highlights the debate surrounding the subject of zoning in the PDP.

With the position of national chairman zoned to the North, it is expected that the South will produce the presidential candidate in line with a power rotation arrangement that has been in place in the party since 1999 when Nigeria returned to civilian rule.

But the 2023 presidential ticket is yet to be zoned, and aspirants from different parts of the country, including the North, have indicated an interest in running for president.

A former Secretary to the Government of the Federation and also former Senate President Pius Anyim has declared his ambition to contest the presidential election on the platform of the PDP.

Anyim is from the South-East, demanding the presidential ticket for not having produced the president of Nigeria.

The Southern Governors Forum has also demanded that the South produce the president of Nigeria in 2023.

Saraki is among those who opposed zoning in the PDP.

Speaking on the matter, he had said, “On the issue of zoning, the party has made it very clear in all our meetings that even though we have zoned the position of party offices, it does not preclude anybody that has any presidential ambition.”