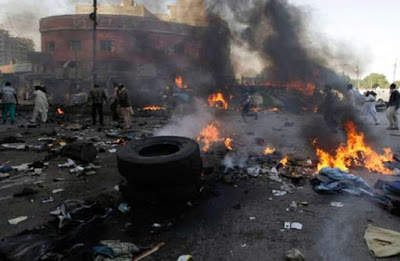 A deadly twin suicide bomb attack at a busy market in Gombe State on Thursday left about 49 people dead and 75 injured, as residents made last minute purchases to celebrate Eid el-Fitr, the Muslim celebration that marks the end of Ramadan, the National Emergency Management Agency, NEMA, has confirmed.

NEMA’s head of operation in Gombe State, Saidu Minin, told our reporter on phone that the attacks occurred at 5:15pm at the popular Babban Kasuwa market located at Babban Layi in the state capital, as two suicide bombers, a male and a female, detonated Improvised Explosive Devices, IEDs.

The Gombe State police commissioner, Kudu Nma, also confirmed the incident to newsmen in Gombe, saying “there was a bomb blast either on a suicide mission or EIDs were kept somewhere, with the view to cause panic and apprehension to people.”

“People were busy shopping preparatory to Sallah festival; the casualties are yet to be ascertained. As you can see, people are busy working trying to save lives, for now we cannot tell you the number of casualties,” the commissioner stated.

Nma said his men quickly moved in to cordon the site of the incident to avoid looting.

Gombe, which shares boundary with Borno State, the birthplace of Boko Haram, Adamawa and Bauchi, has been a target of Boko Haram attacks in recent times and the masterminds of the Zaria and Jos bomb attacks were arrested in Gombe days after the evil act.