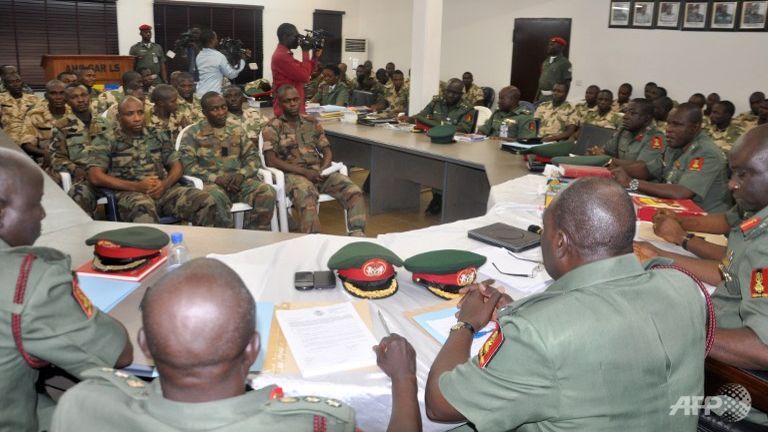 A Nigerian Army court has sentenced 54 soldiers to death by firing squad after finding them guilty of mutiny.

The affected soldiers, who had been on trial for a two-count charge of mutiny and conspiracy to commit mutiny since October 16, 2014, along with five other soldiers, were sentenced by the President of the Court, Musa Yusuf, a Brigadier General in the Nigerian Army.

It was learnt that no case could be established against the five others, so they were discharged and acquitted. The acquitted soldiers are Ogar Simon, Jacob Mallam, Sudan Hannania, Lucky Boaz, and Eyakanze Uwah.

The 59 soldiers who stood trial were members of the 111 Special Forces Battalion based in Maiduguri, Borno State.

They had all been court-martialed for their alleged refusal on August 4, 2014 to join other members of the 111 Special Forces Battalion in a planned operation to recover Delwa, a town in Borno State, from the control of Boko Haram insurgents and also to prepare grounds for recapturing two other towns in the state, Bulabulin and Damboa from the insurgents.

Details of the court proceedings and judgment remain sketchy as journalists were not allowed to cover the proceedings at the court located in the Nigerian Army Garrison headquarters, Mogadishu Cantonment in Abuja.

However, a high ranking military officer who was present at the court said that it was the conclusion of the presiding judge that the prosecution team headed by Joseph Nwosu, a Captain, had been able to establish beyond reasonable doubt the guilt of the affected soldiers.

The prosecution had called three witnesses to confirm the allegations levelled against the soldiers. The witnesses comprised the Commanding Officer of their Special Forces battalion, T. M. Opurum, a Lieutenant Colonel, another member of the battalion, I. Saleh, and the Investigating Officer, Francis Okoro.

Counsel for the defendants, Femi Oyebanji, who stood in for Femi Falana, a Senior Advocate of Nigeria SAN, avowed that they would protest the verdict to the confirming authority.

Oyebanji said after the judgment that the Judge Advocate of the court, Solomon Ukpe, a Lieutenant Colonel, had misdirected the court to give the verdict.

It would be recalled on May 14, 2014 that angry soldiers had fired gunshots at the official vehicle of Ahamdu Mohammed, a Major General, who at the time was the General Officer Commanding GOC, 7 Division of the Nigerian Army, who had visited the Maimalari Barracks in Maiduguri, to address troops some soldiers had suffered huge casualties at the hands of the Boko Haram insurgents. The soldiers had blamed their defeat on counter-productive operational orders from their superiors.

The Nigerian Army has been engaged in a protracted battle since 2009 with insurgent, who are members of the Islamic extremist group, Boko Haram. Reports of desertion and loss of morale amongst troops have been rampant as the troops have complained of faulty equipment and low remuneration for the risks encountered. Senior officers, on the other hand, have attributed the trend to lapses in the army’s selection and recruitment processes.