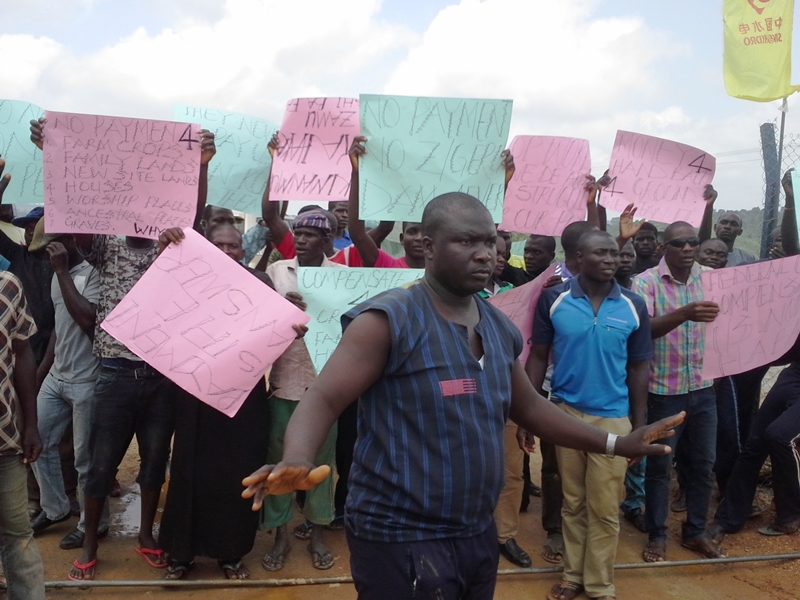 Activities at the construction site of the 700megawatts (mw) Zungeru hydropower dam in Niger State have been stalled due to poor compensation to affected communities and litigations by aggrieved persons.

This investigation by Daily Trust, shows that the affected communities are worried over the hardships the stoppage has caused for Zungeru inhabitants whose hope of leading a normal life has been affected.

The federal government broke the ground for the Zungeru power dam in May 2013 when it said it would spend $1.3 billion (about N232.375 billion) on it to generate 700mw through a partnership with the Chinese Export Import (EXIM) Bank expected to co-finance 75 percent.

Shortly after, the project awarded to Chinese consortium, Messrs CNEEC-Sinohydro, was found to be displacing 98 communities domiciled in three emirate councils of the state.

Minister of Power Prof. Chinedu Nebo in February 2014, then inaugurated the Zungeru Hydro Community Relations Committee (CRC) to oversee the relocation of about 22,100 persons in the affected communities.

According to him, “the valuation report indicates that a total of 22,100 persons, 15,958 farmlands and 6,762 properties domiciled in 98 communities would be impacted by the project.”

Ten months after, communities are still languishing over low compensation and omission of names, while the project has been stalled due to what the federal government described as ‘teething problems’.

A source who spoke to Daily Trust in confidence at the site in Wushisi Local Government Area said work had stopped for about three months as the Chinese company handling the project, Synohydro, laid off about 90 percent of its workforce.

Although many of the staff at the site declined to comment, one of them however said, “work was forced to stop by members of the affected communities for not being compensated and that since the work stopped, it had not resumed.”

Another source said the consultants for the project dragged the federal government to court over financial breach. ‘Work stopped at the site after a court directive saying work would only resume when it is otherwise directed,’ he hinted.

The Minister of State for Power, Hon. Mohammed Wakil, confirmed the stoppage of the project in an interview.

He said: “Immediately the Zungeru project took off, we had legal challenges. Somehow in the communities, some people, I can say powerful people instituted court action and in fact they succeeded in getting an injunction restraining government from further doing the project.

“At a point we had about two to three litigations on the project but the ministry has been trying to resolve the problems outside the court. A committee has been set up and they have held several meetings with the parties involved. It is a national project and we do not want to be unnecessarily bogged down by litigations. ”

“We are being careful and are engaging the parties with a view to settling out of court. That has tampered with our timetable but even with that there has been a lot of progress,” he concluded.

Speaking further to Daily Trust about the compensation challenges, spokesperson of the Community Relations Committee, Malam Salman Yusuf said over 90 communities had been captured during verification and that payment of compensation to beneficiaries began three months ago, with about 60 percent of the beneficiaries already paid.

Representatives of the five affected districts including, Manta, Gurmana, Alawa, Kuta and Gelkogo also expressed their grievances. The Chairman of  Gurmana Development Association, Comrade Gambo Yusuf and Chairman of Manta District Development Association, Nimrod Zarmai said only half of the affected people from the districts estimated to be over 20,000 were captured.

They said there are omission of names in the exercise alongside alleged cases of underpayment for the few economic trees captured, adding that an old rate of N2,000 for a tree was used.

The districts attributed the many omissions to the compensation and resettlement committee not displaying the captured names of beneficiaries for verification. The two leaders said so far, the highest beneficiary from Beri community got N290,000 while the lowest from Gunugu community got only N9,450 out of which they would have to pay 11 percent as Attorney charges.

Left with hardly a farmland in the meantime, Malam Nuhu Ndayika, an affected farmer said the project is dealing unfavourably with the locals especially those living around the dam’s heart across River Zungeru.

Ndayika who spoke in Hausa while conducting the reporter round his farm said “this project affected my grains’ output this year. I farm maize on large scale basis while I do irrigation farming with the water from the river. But government has taken a chunk of the land and has not given enough compensation for it.”

He said the hardship may worsen when they start diverting River Zungeru for earthworks next year because, “by then, we may not even have access to watering our farms anymore. But we hope we would be resettled before then.”

A youth in Gunugu community, few kilometres from the project site, Peter Bako narrated the hardships they face as the planned relief and resettlement of affected communities is yet to take off. He noted that some youths recently protested about the condition, a situation that prompted the commencement for the compensation for economic trees in the area.

“We were told at an Emirate Councils meeting involving Kontagora, Kagara and Minna emirates early this year that the federal government will construct model towns for us in 33 resettlement areas where we are supposed to relocate to. But as I speak, we have not heard anything from them.

Meanwhile, the Permanent Secretary in the Federal Ministry of Power, Dr. Godknows Igali in an interview spoke on the project’s status. He said, “the Zungeru project is on course, the Chinese contractors are on site and significant progress has been made.

“A lot of the design work and the construction design have been completed. The next major milestone we are looking forward to is the diversion of the river so that the major RCC construction can start.”

On agitations from the affected communities, he said: “Large hydro projects have significant impact on communities and when you are dealing with thousands of people, there is no way you can implement it without somebody saying I am not satisfied.”

Igali who spoke through the Director of Power, Sanusi Garba, whom he said, has much experience on large hydro construction explained the reasons for delay in compensating affected persons.

He said: “You cannot pay 98 communities overnight. We have checks and counter checks at every point in time, and it is a slow and laborious process because you don’t want to pay someone twice and you don’t want to omit anybody.”

The ministry said it is contracting firms to do roads at the new site that has been given to resettle the affected communities. “We are also constructing community facilities like boreholes and so on at the new 35 sites, though we haven’t started, we are in the process of doing the procurement. That is why I said this is a process that is not expected to happen overnight,” he noted.

Although Garba said many community members have been compensated, he refused to disclose the amount disbursed so far saying “I will not support mentioning figures because you will put people’s lives at risk of kidnappers and so on.”

But a senior ministry official privy to the 700mw Zungeru Hydro Electric Power (HEP) project said N300 million was appropriated in the 2014 budget to implement the Environmental Impact Assessment (EIA) which was confirmed in the first quarter, and then the resettlement of affected communities including their due compensation.

Garba also assured that once the teething problems are resolved, the contract is expected to progress faster so it could meet the 48 months’ completion timeline expected to be realised in 2018.

He allayed fears of the project being delayed beyond the timeline as he said: “What we have is an EPC contract with the time, cost clearly defined, and if the contractor defaults in meeting the timeline, there are liquidated damages.”

The project was supported by Ford Foundation and the International Centre for Investigative Reporting (ICIR).