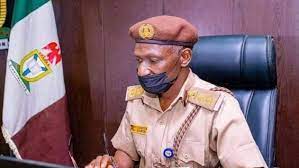 ACTING Comptroller General of the Nigeria Immigration Service (NIS) Idris Isah Jere has warned officers at the Abuja and Lagos airports against corruption.

Speaking at a meeting with immigration officials at the Abuja airport, Jere condemned corrupt practices, some of which were captured on video, that have generated several complaints from members of the public.

He said such attitude has a negative impact on Nigeria’s image and can discourage potential investors and visitors.

Jere called for enhanced cooperation among heads of various agencies for a coordinated onslaught against criminals embarrassing the country.

“Passengers should constantly resist, reject and report instances of bribe solicitations, extortions and or any unprofessional conduct to appropriate desks within the ports”, he said.

Regional General Manager NAIA Abuja Mahmud Sani assured that the Federal Airports Authority of Nigeria (FAAN) was committed to ending all acts of corruption at the airports.

Jere also met with immigration officials and staff at the MMIA Lagos, where he repeated the warning.