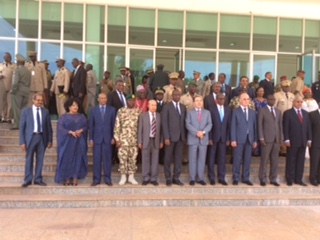 Defence chiefs from several African countries are meeting in Bamako, capital of Mali, to discuss the insecurity affecting some countries on the continent, particularly the threat posed by Boko Haram in the Lake Chad Basin Commission and Al Shabab in Central Africa.

Nigeria’s defence chief, Gabriel Olonisakin, who is attending the meeting, is expected to brief his counterparts from other countries on how Nigeria has responded, with the help of its allies, to the Boko Haram insurgency, including the imminent deployment of a Multinational Joint Task Force.

In a statement released by Nigeria’s defence spokesperson, Rabeh Abubakar, a Colonel, the meeting, which is on-going, is expected to bring the continent together in the fight against terrorism and other security challenges.

“In order to promote a shared assessment of the threats risks in the affected regions, the meeting proposed to classify the threats and risks in the regions into four major categories which include; Terrorism, Organized Crime (Drugs, Arms and Human Trafficking), Illegal Immigration and Separatism,” the statement read.