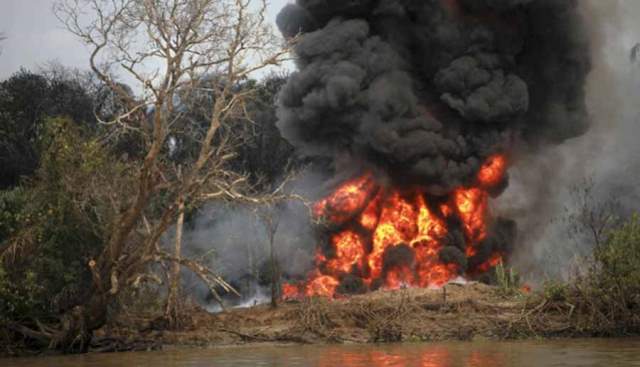 The fire that started on Friday morning gutted the NNPC pipeline. The staff of NNPC, security operatives and firefighters were already on the ground to rescue the situation as at press time.

Reports say the pipeline fire explosion does not threaten human and public lives as the location in Isale Odo, LASU Road, Egbeda, Alimosho area of the state, is isolated.

According to an eyewitness, an electric cable collapse led to sparks all over the area which got to the spilt content of PMS around the site and led to the pipeline subsequently exploding.

Director of Lagos State Fire and Rescue Service Adeseye Margaret, who confirmed the incident at 8.30 a.m., said, “We are aware and on top of the situation at Baruwa pipeline fire explosion.”

However, she could not state the actual cause of the explosion but said a proper investigation would expose the reason.

The area is used to pipeline vandalism due to the rampant activities of vandals. A fire explosion occurred in the same axis in April 2021 that damaged the pipelines of the Nigeria National Petroleum Corporation (NPPC) and caused a lot of commotion in the area.