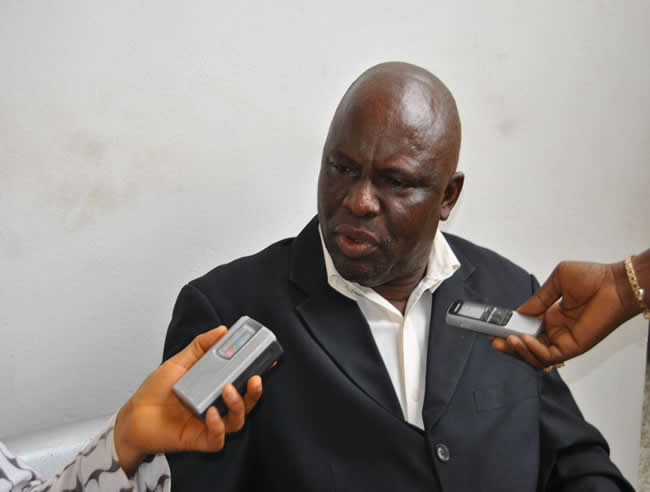 The Inspector General of Police has been asked to order investigation into the alleged assassination attempt on the media director of the Godwin Ezeemo Campaign organization, Okey Nwoke.

Ezeemo is vying the governorship in the forthcoming Anambra elections under the platform of the People’s Progressive Alliance PPA.

Nwoke recounted to journalist his ordeal in the hands of hired assassins whom he said nearly killed him for abandoning the All Progressives Congress for the PPA.

He said he was attacked by riffle wielding young men numbering about six who trailed him for a while before blocking his path when he tried to overtake them.

His attackers, he said, operated in two cars; a maroon coloured SUV and a Toyota Camry car. While the SUV drove in front of him, the Toyota trailed behind with him in the middle the whole time.

“I left my home in Enugwu Adazi in Anaocha LGA for Mr Ezeemo’s place as we had a scheduled meeting today, and all the directors of Ezeemo campaign were supposed to meet in his house.

“As I drove through Igboukwu, I noticed a Toyota Camry car painted in ash colour following me. I did not suspect anything until I noticed another jeep in front of me which was not speeding as it should. It was when I made to overtake him that Camry and jeep blocked me, and before I could realize it, the two back doors of the car were open and two boys carrying AK 47 riffles stepped out and aimed at me.”

He said as he engaged his gear in reverse and waited to see their reaction, one of the two men shouted “he is the one; he left APC; this is the man!”

He told journalists that it was at this point that he sensed danger and began to reverse, which prompted the men to start shooting and running after him on foot. 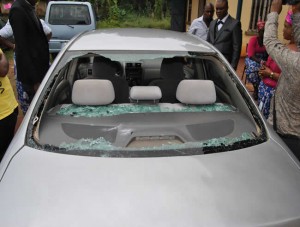 Nwoye’s vehicle after the assasination attempt

“Their cars also reversed and raced towards me and as they slowed for the two gun men to enter the cars, I also took the opportunity to reverse and started speeding away, while they pursued and shot at me. It was like something from the scene of a movie,” he said.

Nwoke said that from all indication, the assassination attempt on him was motivated by politics as the men who tried to killed him clearly stated that they were carrying out the attack because he left the APC for PPA where his principal, Ezeemo, who had run on the platform of APC against Ngige decamped after he lost at the primary election.

In a press conference last week to state the reason why Ezeemo dumped APC for PPA, Nwoke stated that he took the step after the merger deal, but left the party to join Ezeemo in PPA because he was rigged out of the primary election unjustly.
When our correspondent called Emeka Chukwuemeka, the Public Relations Officer of the Anambra State Police Command for confirmation, he said that he was not aware of the incident as he had not been briefed by the Area Commander of the Aguata Division.

The victim, Nwoke however told journalists that he has made entry at Nnanka police station and has been assured that the matter will be investigated.

Speaking on the incident, the chairman of PPA in Anambra State, Kanayochukwu Obidigbo, condemned it and on the Inspector General of Police to order a thorough investigation of the matter.

“We want the police and other security agencies in the country to take this seriously. I did not know that people will go to that extent in politics. Since Ezeemo joined PPA and started his campaigns, other aspirants have noticed that he is the man to beat, and they have been working to bring him down. The IG must ensure security for our candidate and even Nwoke who they are targeting now,” he said.