Another Suspected Case Of Ebola In Nigeria 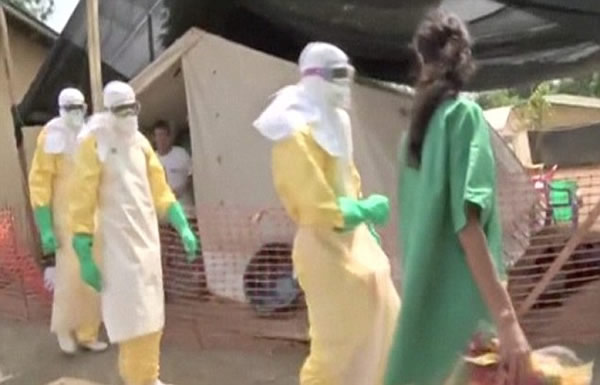 A worker at the the Murtala Mohammed International Airport, Lagos, who assisted Patrick Sawyer, the Ebola victim who died in Lagos last week, is suspected to have been infected with the dreaded disease, having come down with fever.

Although it is still not confirmed if he has tested positive to the Ebola disease, as he is still under observation as at the time of reporting, anyone who has had contacts with a patient is at high risk, thus the reason for the suspicion.

“Yes. I just received a text alerting me that he is sick,” a source who is a member of the expert committee on Ebola told the icirnigeria.org on Wednesday afternoon in Lagos.

The sick man whose identity is not clear at this the time of reporting is one of those who were being monitored and he is coming down with the signs of high body temperature and fever, within the incubation period of 2-21 days.

This is characteristic of the initial signs at the onset of Ebola.

Indications are that he might have contracted the virus while helping Sawyer or after coming in contact with his personal effect, since the virus is renowned for its rapid spread through contacts with body fluids such as blood, urine, saliva, tears and even sweat of infected persons.

Late Sawyer, a senior official of the Liberian government, who arrived Lagos on Sunday July 20 is the first confirmed case of ebola in Nigeria.

The Lagos State health commissioner, Jide Idris, had said on Monday that it has reached a total of 59 persons who had physical contact with the late Sawyer.

Of this number, 20 had so far been screened on Monday, he said and none tested positive, but they were all still under observation.

Ebola has killed over 700 people with 1093 suspected cases of infection in Liberia, Sierra Leone and Guinea since February.

Once infected, it takes between 2-21 days for the virus to incubate, and symptoms usually start off with fever, high temperature, intense weakness, muscle pain, headache and sore throat then it graduates to committing and diarrhoea , rash, impaired kidney
and liver function and, finally, bleeding from orifices of the body such as eyes, nose, mouth, et cetera.

Those who were with him on his flight from Monrovia to Lome and Lagos were yet to be traced on Monday when Idris addressed the Press as he said the airline had not released manifest of passengers.