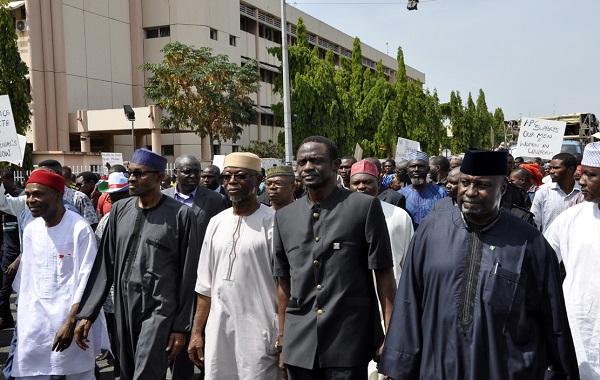 The All Progressives Congress, APC, on Wednesday held the first in the series of its “Salvation Rallies”, aimed at whipping up opposition to what the party terms the incompetence of the Goodluck Jonathan – led federal government.

The event which took place at the Eagle Square saw crowds of everyday Nigerians cheering the national leaders of the party as they took a protest march first to the Unity Fountain in the heart of Abuja, then to the office of the Inspector-General of Police and ending at the Eagle square

Addressing the audience at the Eagle Square, the national chairman of the party, John Oyegun, said the rally was a “practical demonstration of our lack of confidence in the ability or willingness of President Goodluck Jonathan to organise a free and fair election come February 2015”.

Oyegun said that the war against Boko Haram had become a tool for self-enrichment and a strategy to disenfranchise Nigerians who are perceived not likely to vote for President Jonathan’s re-election.

He accused the Jonathan administration of deliberately allowing the insurgency in the North east to fester so that it can have an excuse not to hold elections in the area next year.

“Everything points to the fact that President Jonathan’s handling of the Boko  Haram insurgency is aimed at one thing and one thing only: disenfranchisement of persons who are perceived not to be in support of his re-election, especially in the North-Eastern part of the country,” he said.

“President Goodluck Jonathan is so desperate to win re-election that it will now appear that there is a secret understanding that our security forces should turn a blind eye to the Boko Haram Insurgency so that the insurgents can occupy as much territory as possible and make elections impossible in these areas, knowing fully well these are APC strongholds. ”

The APC chairman said Nigerians should pay attention to the fact that Mubi community in Adamawa State was captured without one shot been fired by the insurgents or one single casualty on the part of federal troops.

He also charged Nigerians to ask questions about why and how mere vigilantes have succeeded where professional soldiers failed.

“How does one explain that local hunters carrying Dane guns and amulets are capable of dislodging the dreaded Boko Haram while our once proud army, which has distinguished itself in and out of the country, has failed?”

Oyegun also berated the President for toying with the emotions of Nigerians especially the families, relations and associates of the abducted Chibok girls, saying that to him the students were nothing but “pawns on his political chessboard”.

He alleged that the October 17 announcement by the Chief of Defence Staff that Boko Haram had agreed to a ceasefire and that the release of the abducted girls was just a matter of days was nothing but a ruse needed to prepare the minds of Nigerians for his eventual declaration of his intent to contest for re-election.

On the issue of registration for the coming general elections and the on-going distribution of Permanent Voters’ Card, PVCs, Oyegun accused the Independent National Electoral Commission, INEC, of colluding with the presidency to disenfranchise voters in the APC-controlled states.

Calling the entire exercise a fiasco, he said “The PDP, realizing the overwhelming support and followership which APC enjoys in the above mentioned states, has deliberately decided to use the ICT department of INEC to rig the 2015 general elections at source by disenfranchising millions of the opposition party’s supporters. How else do you explain the fact this same exercise, which had gone fairly well in 24 other states – mostly PDP states – is now a fiasco in Lagos, Kano Rivers, Niger, Ogun, Katsina, Kaduna, Zamfara- all APC strongholds and with the highest number of registered voters? In the aforementioned states, millions of voters have been disenfranchised because the system was deliberately corrupted to wipe out their names from the voters register. Even those who were able to vote in 2011 could no longer find their names on the register.”

He also accused President Jonathan of embarking on a scheme to cause disaffection within the APC-governed states by not funding the Federation Account adequately while secretly and unconstitutionally funding PDP controlled states.

“Not too long ago he dashed all PDP controlled states N2 billion each. Not only does this affect the letter and spirit of our constitution, it also portrays him as the President of the PDP and not that of Nigeria. Although oil has been selling at well over USD108 against the benchmark of USD78, President Jonathan had been funding the Federation Account only between 60-70%. What is his official explanation for this?”

Speaking also on the 2012 fuel subsidy saga, Oyegun said it was baffling that up till date, not one individual or organization has been successfully prosecuted or convicted.

The APC chairman also said the use of the police and the military in past elections in Ekiti and Osun states are pointers to what Nigerians should expected in 2015.

“In Ekiti state the police looked the other way when judges were being beaten and only two days ago in the same Ekiti under the protection of the police, democratically-elected principal officers of the state house of assembly were sacked by six out of the twenty-six elected members. The Nigeria police has today become the armed wing of the PDP and they cannot be trusted under President Jonathan to be unbiased umpire in the February 2015 elections”, he said.

Explaining why the rally was convened, Oyegun said it was to press for the federal government to end the raging insurgency in the North east, end the impunity that permeates the Jonathan administration, end the massive corruption that has left the nation impoverished in the midst of plenty, and make efforts to ensure that that 2015 elections will be free and fair.

Speaking earlier, the former minister of the Federal capital Territory, Nasir el Rufai, had also alleged that the federal government was sponsoring the insurgency in the North east so that no elections would be held in states which nye said are controlled by the APC.

He said that recent events in the region, including the alleged arrest by the police of local hunters who fought and recaptured Mubi from Boko Haram insurgents, were evidence that the federal government had a hand in the terrorist attacks in the area.