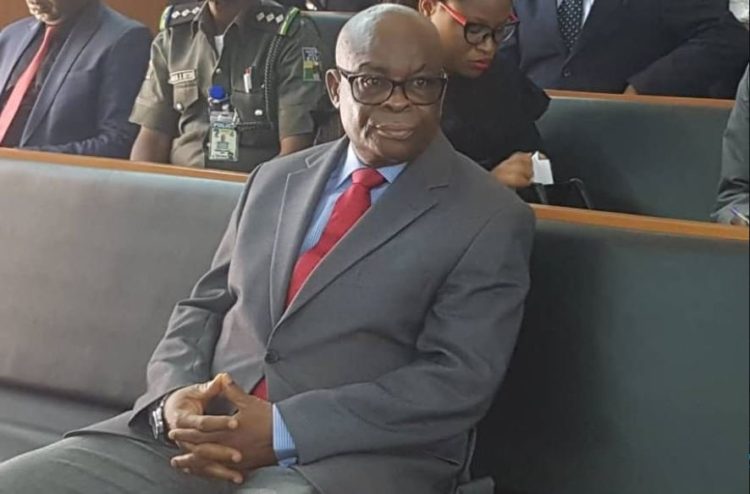 THE Court of Appeal sitting in Abuja says the ex parte order granted by the Chairman of the Code of Conduct Tribunal (CCT), Danladi Umar, ordering the suspension of the former Chief Justice of Nigeria (CJN), Walter Onnoghen, was “obtained via the back door” and “shrouded in secrecy”.

The panel, however, struck out Onnoghen’s appeal against the ex parte order, saying it has been overtaken by events and therefore is “already spent”.

The court sitting, which was scheduled to begin by 9 am on Friday, eventually kicked off at past 1 pm, as according to court officials, faulty printers prevented the judges from printing their judgements on time.

Onnoghen was suspended by President Muhammadu Buhari in January 2019 following allegations of corruption as well as false assets declaration. Buhari named Tanko Mohammed, who was the most senior Justice of the Supreme Court of Nigeria at the time, as Acting CJN and he was sworn in immediately.

Buhari said Onnoghen’s suspension was in keeping with the order of the CCT which directed that Onnoghen be stepped aside pending the determination of the case against him.

Delivering the ruling on Friday, Justice Adah noted that though Onnoghen had been served notice of summons for the charges against him, he had not been arraigned in court as at the date the ex parte order was issued.

He pointed out that on the day the trial was to commence, Onnoghen was not in court and as a result, sitting was adjourned. Adah wondered why the prosecution, who had said that the matter could not be heard as the accused person was not present, went behind the defence counsel to obtain an ex parte order removing him from office.

“Justice must never be shrouded in secrecy or clandestine activities,” Adah said.

However, he said that the appeal has been overtaken by events, as Onnoghen eventually faced trial and proceedings have been concluded and judgement delivered.

“The ex parte order is already spent,” Adah said, and since it can no longer serve any purpose, and cannot be allowed to remain before the panel, “it is hereby struck out”.

Adah asked parties in the matter to now concentrate on the substantive appeal in which Onnoghen had challenged the judgement of the CCT which declared him guilty of false assets declaration and, therefore, barred him from holding any public office in Nigeria for the next 10 years.

In the second appeal, in which Onnoghen asked the appellate court to overturn the bench warrant issued against him by the CCT, the appeal panel court said that too had become academic as Onnoghen eventually attended trial and there was no evidence placed before it that the bench warrant was executed against the former CJN.

The ruling on Onnoghen’s third appeal was delivered by Justice Akomolafe-Wilson. The appeal was to determine whether the CCT was right to continue the trial without first determining the issue of jurisdiction that was raised by Onnoghen’s counsel.

Akomolafe-Wilson agreed that according to the general principle law, once a court’s jurisdiction is challenged, the court must first determine the issue before proceeding with the case. However, she said that in the case at hand, there was specific legislation in the Administration of Criminal Justice Act (2015) overriding the general principle. She, therefore, resolved the issue in favour of the respondent(the CCT) and against the appellant (Onnoghen).

The fourth and final appeal bothered on whether the CCT Chairman, Danladi Umar, was right to have discountenanced the orders of the Federal High Court, the FCT High Court, and the National Industrial Court respectively, directing it to stay proceedings in the trial of the former CJN.

Umar had held, at the time, that the Federal High Court, FCT High Court and the NIC were courts of coordinate jurisdiction with the CCT and, therefore, the tribunal was not bound by the orders of the courts.

However, Justice Ige, who delivered judgement on the fourth appeal, said it was wrong for the CCT to have assumed the position of the appellate court by discountenancing valid court rulings.

“Any judgement, decision or order of a court remains sacrosanct and cannot be discountenanced,” Ige ruled. “The lower tribunal ought to have obeyed the court orders or have them vacated by the appellate court.”

He went on to resolve the issue against the respondent and in favour of the appellant.

Speaking to journalists after the judgement, Counsel to Onnoghen, George Ibrahim, said it was disappointing that the judgement was coming at a time when the matter had become academic.

He, however, expressed satisfaction with the ruling which pointed out that the order suspending Onnoghen was obtained through the back door.

Ibrahim also wondered why the CCT Chairman has not issued them with copies of the final judgement delivered on April 18 and the rulings he gave in the course of Onnoghen’s trial.

“Since the decision of the 18th of April, up till now, he has not given us copies of the judgement, or the two rulings that he delivered, the one challenging his jurisdiction and the one asking him to recuse himself, up till now. And if care is not taken we may find ourselves where we have found ourselves today,” he said.

“There is this school of thought that believes that justice delayed is justice denied, that is exactly what has happened. Judgement has come, findings have come, but we can no longer use them.”

Ibrahim further clarified that Friday’s judgement was not that of the appeal of the final judgement delivered by the CCT on April 18. He said three appeals challenging the judgement is still pending before the appeal court.