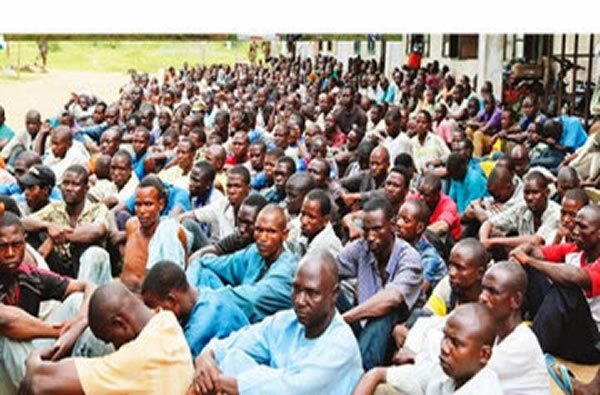 The military said on Tuesday that a key wanted man was among the 486 terrorist suspects intercepted in Abia State on Sunday along the Enugu-Port Harcourt expressway by soldiers attached to the 144 Battalion of the Nigerian Army, Asa in Ukwa West local government area.

The suspects, who are said to be within the age bracket of 16-25 years and all males from Kano, Jigawa, Adamawa and other parts of the north eastern part of the country, were travelling to Port Harcourt, Rivers State, in over 35 Hiace Hummer Buses when they were apprehended.

It is suspected in some security circles that the group comprised terrorists fleeing from Owerri, the Imo state capital, after security operatives mounted pressure to hunt them down following the discovery of bombs in a church.

Army spokesman, Chris Olukolade, a major general, in a statement confirmed that a terror kingpin in the list of wanted terrorists of security forces in Nigeria has been detected in the on-going joint screening of the 486 suspects.

Olukolade said other security agencies including the para-military joined the screening exercise to ascertain the status of the remaining suspects and that those identified as possible security risk or illegal immigrants are expected to be identified for further action.

Meanwhile, the Arewa Youth Consultative Forum has condemned what it referred to as a random arrest of northerners in Abia State as suspected Boko Haram insurgents, stressing that it was wrong to treat innocent from the zone as terrorists.

“We are not in support of Boko Haram or their bomb attacks (but) we are saying that innocent citizens should not suffer because some evil-minded people come from their area. I can tell you that those who were arrested in Abia are not Boko Haram members,” President of AYCF, Yerima Shettima, said on Tuesday.