As rainstorm wreaks havoc in Kwara, many residents remain stranded despite govt’s intervention 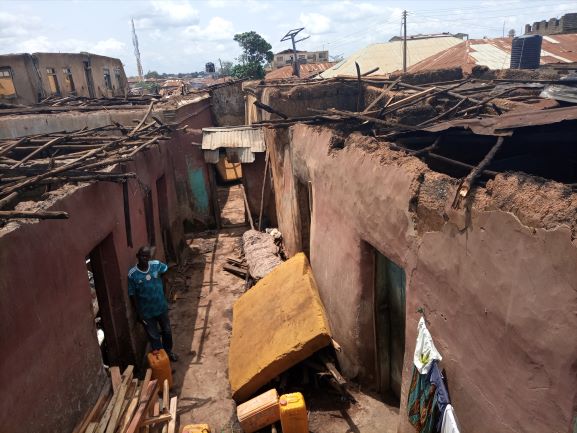 ALIYU Akuji and his family were already asleep when a heavy rainstorm began. Smitten with fear and turmoil, they watched helplessly as the rainstorm blew-off their rooftops allowing heavy water flow into their apartment. Their properties destroyed, and the rainstorm left them with no option than to seek shelter and protection in neighbouring houses.

“This kind of incident is unprecedented. The rainstorm destroyed my house and shop. I can’t do anything right now. My children and wife are yet to find any stable place to settle, we all went separately in the night to seek refuge at any place we find and meet again in the morning,” Akuji narrated his ordeal to this reporter.

He said the heavy rainstorm is double jeopardy for him. Apart from the fact that it blew-off his residence, it also destroyed his shop leaving him homeless and jobless at the same time.

September 19, 2020, will remain a night of gloom for residents in several communities in Kwara State where the heavy rainstorm destroyed houses and shops, blew-off rooftops, and left many less-privileged persons homeless.

This reporter who visited some areas in Ilorin, the state capital observed that since the incident, many victims are still stranded due to lack of shelter.  The persistent rainfalls accompanied by a heavy flood in the state have made life very difficult for many residents.

Many of these displaced persons are currently taking refuge in mosques while others are putting up with their families and friends living within the neighbourhood. 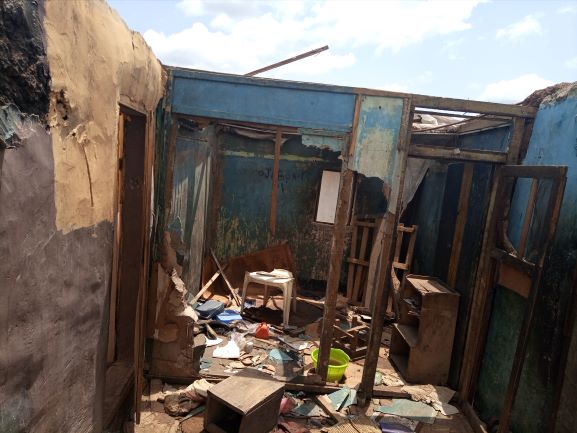 According to the Kwara state government survey, at least 12 local government areas with about 15,000 households across 357 communities were affected, and 13 deaths were also recorded during the incident. Farmers suffer a loss of 10bn and damage to properties,  according to the survey.

Earlier this year, the National Emergency Management Agency (NEMA) had alerted Nigerians to prepare for heavy rain between the months of August and October this year.

The agency in its alert made reference to a prediction from the Nigerian Meteorological Agency (NiMeT) in February, as well as Nigeria Hydrological Service Agency (NIHSA) in May, informing Nigerians of impending heavy rainfall due to climate change and the melting of the ozone layer.

Some of the displaced persons who spoke with this reporter could not hold back their emotions as they reflected on the loss the ravaging storm has brought upon them. With deep anguish, they called on the government, corporate organisations, and privileged individuals to come to their aid.

In Olokonla Compound, Ilorin, Kwara State out of the 27 households in the compound only 3 buildings were untouched. Alhaji Sambo Olokonla explained that more than 100 people were displaced by the rainstorm within the household.

“Husbands, wives, and children are sleeping anywhere they see, we only met in the morning. Anybody who sees the havoc wreaked on us by this rainstorm does not need to be told before they know that we need assistance” Alhaji Olokonla said with dismay.

One of the affected residents who identified herself as Alhaja Fatiu explained that the rainstorm has made life unbearable for her, her husband, and her children. She explained that her husband also got injured during the incident.

“All our rooftops are leaking and many of our properties sank in the water. We can’t find any place to place our heads. In fact, my husband got injured when the incident occurred.”

Alhaji Ibrahim Bobonkiri, a resident of Bobonkiri compound in Ilorin Kwara state recounted the ordeal of his family during the incident, he explained that the neighbouring residents who were not affected by the rainstorm borrowed them rooms which they squashed themselves in. He also said some residents lodged in the nearby mosques to sleep.

“5 out of 7 households in this compound were affected. All of us are just loitering around, neighbouring houses squat few of us in their houses, while others squat in the mosque”

He appealed to the government and the public for household materials and other relief materials.

The Internal Displacement Monitoring Control(IDMC) survey in 2018 reveals that “every year, floods, storms, earthquakes, and other natural hazards are the reasons which forced two-thirds of new internal displacements in 2018 representing 17.2 millions of people to abandon their homes.” 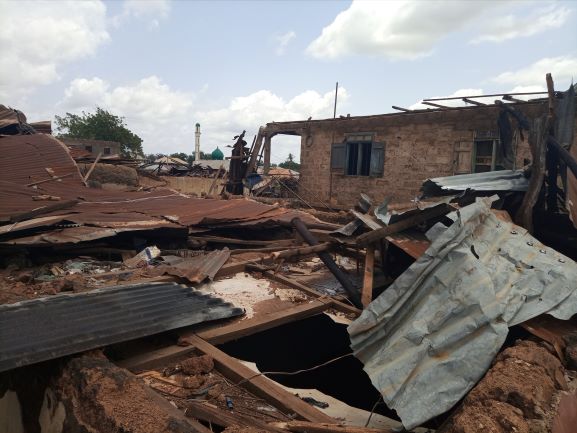 The agency also noted that, “Losing everything is usually the first of many disruptions that the victims of natural disasters usually suffer.”

It also added that “affected people may be forced to move multiple times once they become displaced, and it can take months or even years before they can return home. Those who do return often face unsafe conditions and the prospect of becoming displaced again by the next disaster.” This now rings true for the individuals affected by the Kwara rainstorm.

The rainstorm in Kwara, aside from displaced persons, it also affected economic activities. Several shops were destroyed alongside valuable properties.

Recounting her loss, Roheemat Jimoh who is into event planning, decoration, and cake explained that the rain invaded her shop and destroyed some bags of flour, and cakes meant for an event.

” The rainstorm destroyed some bags of flours, colouring, mirrors, cakes, and other materials in my shop which are worth almost #100,000. We even have a wedding to plan on Saturday but the materials that we are supposed to use have been destroyed and you know our customers won’t listen and we are yet to find a way out.”

Like Roheemat, Abdulgafar whose provision store was destroyed explained that the rain invaded his shop and drenched many of his provisions in water.

“The rain destroyed a lot of things in my shop, most of the glasses and cartons of provisions in my shop were destroyed. As of now, we are yet to start a normal business, I am still looking for a way out.”

Ismail Oke, who is into Aluminum business also recounted the havoc the rainstorm wreaked on his business appealing to the government to come to their aid.

“The rainstorm destroyed some aluminum materials and other properties worthy of #500,000. All the glasses that we wished to deliver to some people too have been destroyed by the flood and rainstorm. We call on the government to assist us.” Ismail said.

What has the government done?

On Monday, two days after the incident, the Kwara State Governor, Abdulrahman Abdulrazaq set up a nine-person committee to conduct an assessment of the damage caused by the rainstorm in different parts of the state especially the state capital Ilorin.

The committee is to collate data of areas affected and determine how the state government can offer support to the victims based on available resources.

The Governor and his cabinet assured the community that the state government will promptly provide palliatives to the victims to ease their hardship.

During his visit to President Muhammad Buhari on Monday, the governor appealed to Federal Government to assist the state with food items, housing materials, and other relief materials.

In the meantime, the state government has flagged off the distribution of palliatives to the residents of Jebba and some north senatorial districts and there are expectations that the support would be extended to other communities as soon as their data is collated.

The Chairlady of the Committee on the rainstorm incident, Mrs. Saadat Modibbo Kawu on behalf of the government commiserated with the victims, she explained that the government is working round the clock to assist the victims.

“We have been going around, what we have been doing is to capture those houses that have been affected and to commiserate with the families, we have been to many local government areas within the state and we are still doing that, hopefully within the shortest period of time, the data will be submitted and the committee will do the distribution of relief materials.”

She however assured the victims of the government’s impelling intervention and advised the residents of the state to ensure that they use good household materials in building their houses and to endeavor to seek the advice of building experts saying that most of the affected houses are old and too weak to withstand heavy rainstorm.

Meanwhile, some non-governmental organizations and wealthy individuals have also come to the aid of some of the affected victims. However, there remain scores of affected victims who are yet to receive any form of support from the government, corporate organisations, NGO, or individuals at the time of filing this report.

THE Federal Government has backed the United States (US) government's decision to impose visa...

AN Abuja Federal High Court on Monday, January 30, dismissed a suit by a...

TWO Nigerian nationals were reportedly killed in Johannesburg, South Africa at the weekend amid...

THE increasing number of invalid votes has been a major concern for Nigerians going...

NIGERIANS in the Diaspora have been excluded from the ongoing cash swap programme launched...
Advertisement