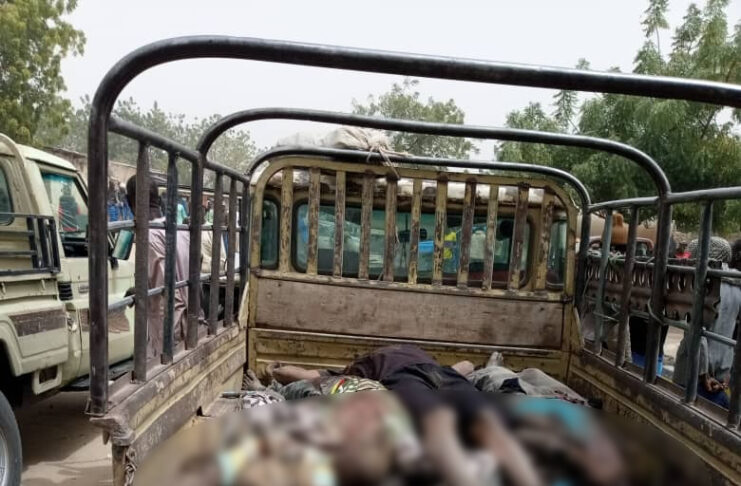 AN eye witness report on the events that led to the demise of scores of people in Auno village, in Konduga Local Government Area of Maiduguri on Sunday night, have emerged.

In the report which was shared with The ICIR, it was revealed that over 60 people were killed, and women, children were raped and abducted by the insurgents.

Painting a clearer picture of the tragedy, it was stated that motorists who were journeying into Maiduguri were denied entry as they arrived after the time of the curfew.

The Insurgents were reportedly led by one Amir called Modu Kawu and they launched an attack on the passengers who were said to be only 5 kilometers away from Maiduguri.

“They came with six gun trucks for the first attack. Later 18 trucks joined them as reinforcement and they burnt and killed the passengers in the second attack.

“A woman was raped and her newborn baby’s head was crushed to death and later burnt her alive after her both legs were shot. An additional six ladies were raped in the process and taken away by the insurgents,” the eye witness report claimed. 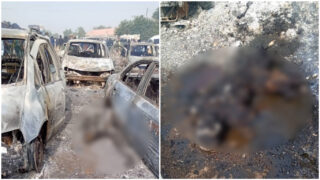 It was also reported that no security reinforcement from Maiduguri showed up. According to the eye witness, only the Special forces from Benishek under One Officer Manga came forth and the officer was left with no support from other troops, leading to frustration.

Many cars and trucks carrying passengers were reported to have been burnt beyond recognition by the insurgents.

Meanwhile, in a recent tweet by Daily Trust newspaper  President Muhammdu Buhari was booed by residents of Maiduguri during his sympathy visit to the area. The residents lined up on both sides of the road along the airport way, shouting in Hausa, ‘Ba ma so’ roughly means: ‘we don’t want.’

The president who until Wednesday afternoon was at the Addis Ababa, Ethiopia, where he was attending the 33rd Ordinary Session of Presidents and Governments of the African Union, after leaving the country on Friday, February 10, landed in Maiduguri an hour past noon.

News Agency of Nigeria (NAN) reports that the presidential jet landed at about 1:10 PM, at the Nigerian Air Force Base, 105 Composite Command, Maiduguri.