Ayade’s Olimpotic Mask Theory is a recipe for confusion 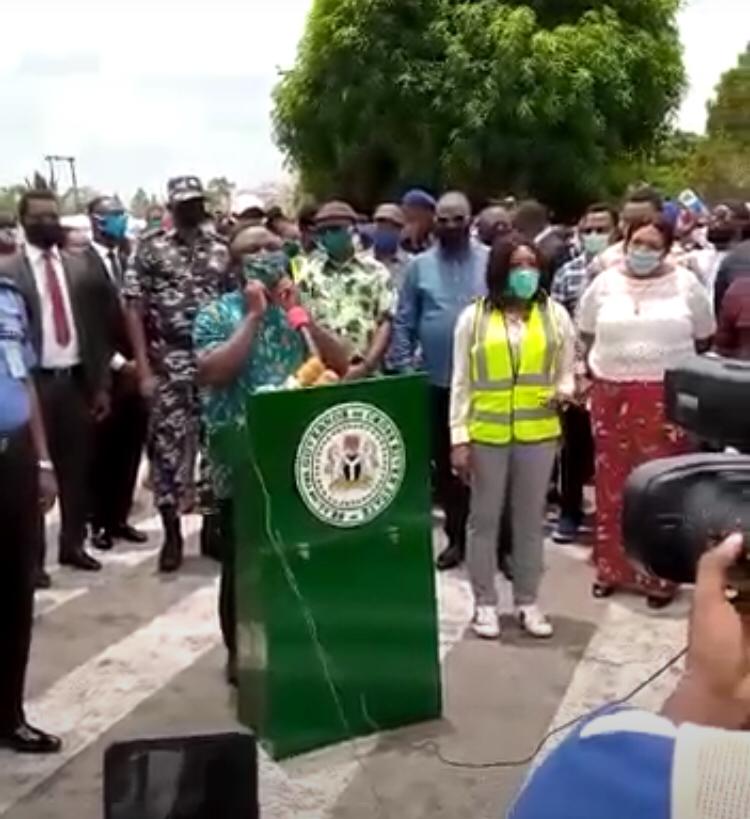 As the SARS – CoV-2 pandemic ravages every nation of the world, you can think of the Governor of Cross River state in southern Nigeria, Benedict Ayade who has drawn up the perfect recipe for confusion amidst the crisis the world is grappling with.

If you do not know Governor Ayade, here is a summary.

He is an intellectual cocktail of wits, smartness, humor, extreme and divergent views that range from the most hilarious to, somewhat critically insane.

Continental Africa has had her fair share of despots wearing the garb of  democratic leaders, and the advent of COVID-19 has further exposed these pretenders in power.

Whilst, the pandemic has dominated public discourse, turning attention from nauseating propaganda of governments at all levels, Mr. Ayade, through his spokesman, Christian Ita, on the night of Wednesday, April 1, 2020 (yes, the fools day) grabbed attention again when he directed that the almost four million people resident in that state would be required to wear face masks before stepping out of their houses from April 3rd.

“No citizen or resident of the state will be allowed to leave home without a face mask from Friday 3rd, April 2020,” read that statement.

The reason was attributed to “the proliferation of new cases in neighboring states.”

The fears are founded. But, the logic is insane. The World Health Organisation has consistently said only care givers and those showing symptoms are expected to wear masks.

Ayade had in that statement directed his pet project, the garment factory to produce masks for all residents and when by Thursday it became clear this was another tall dream he won’t achieve, directed that the restriction be shifted till Monday, April 6th.

“His Excellency, Professor Ben Ayade has rescheduled the take off date for the no mask no movement order to Monday, April 6, 2020,” read the statement issued by Mr. Ita on Thursday night which further explained that the policy, “is geared towards shielding Cross Riverians from the ravaging coronavirus pandemic.”

Now, that factory has fewer than 250 sewing machines and operates on a nine to five basis with two four-hour shifts. If the average production rate for each tailor in an hour is 10 masks, multiply by eight hours, you will get 80 masks. When multiplied by 250, you will get 20,000 masks produced a day.

This means the factory has to work for 80 days consecutively to ensure at least each Cross Riverian has one of the “nose masks” as Ayade called it. But, the new head of the factory who was appointed less than 48 hours ago says they aim to produce 100,000 masks per week. That means it will take 40 weeks or 10 months for the masks to go round. However, since they began production last week, less than 5,000 masks have been produced – meaning less than a percentage of the population have gotten masks yet, Ayade is chasing Nigerians whose fundamental rights have already been breached by draconian directives that are not backed by any law.

Louts and touts who eke out a living shouting at passengers and earn less than two dollars a day are now struggling to sew pieces of clothes together in order to escape law enforcement officers. Civil servants and even those said to be on essential duty wear rags around their faces – pieces of clothes that research has showed cannot stop the virus from penetrating.

Some remove the cups in brassieres and tie a rope on them to use as face masks – as a matter of fact, the streets of Cross River are a reminiscent of the annual Carnival Calabar and Festivals except, these costumes are sold for between NGN300 and NGN500 and are raggedy. A lot of these brassieres are used brassieres popularly called ‘Okirika’ shipped from overseas. The medical risks involved and whether they will stop any harmful micro particle can only be best imagined.

Meanwhile, the size of the novel coronavirus is said to range between 0.06 to 0.14 micrometer. This means that at the largest size, the virus is about 0.00014 millimeter. Now, the cotton material used by the garment factory has a pore size of over 15 micrometer. This means, if the virus is 0.15 micrometer in size, 100 coronaviruses can fit into one pore of the masks produced by Mr. Ayade. Imagine if there are 1,000 pores in that mask, that means 100,000 novel corona viruses can enter. Even if it is triple layered, if we assume but not concede that will cut down the chances of penetration by three, you still have over 33,000 novel corona viruses going through!

Clearly, the cotton material is useless especially as it has no filter in it! Unfortunately, most filters available have a pore size of 1 micrometer which can allow about 6 novel coronaviruses to enter at once. Could it be possible that a Professor of microbiology would not know this or is this an attempt to market the garment factory?

The governor does not joke with his industries, especially the garment factory and seizes every opportunity to sell it.

Here is what he told the press last weekend: “We have decided also to use masks that are wholly customized by the Cross River garment factory and we are ready to buy off nose masks from all tailors in Cross River state. Whatever quantity of nose masks that you can produce, once they meet our technical specifications, in triple layer fold, stitched very properly without any pains to the neck and to the ears and made sure that it is completely airtight, so you don’t have escape off your esophagus when you are sneezing, then we are ready to buy off from you.”

It is a known fact that the method for the production of masks is established and follows certain conditions. Throwing caution to the wind and making exciting statements that will make tailors elated and burn capital to produce face masks that will not meet the standard of the state which in turn does not meet the standard for masks, will definitely be counterproductive.

Cross River state has no power to change the standard on masks production and the state has not carried a test on the masks produced at the factory either! Only some concerned parties have done that and the results are worse than the figures used above.

The worse twist is the directive to the task force to impound vehicles when the occupants are not wearing masks. These are to be released after the payment of a NGN300,000 (approx USD780) fine. This is criminal in nature. There is no law backing that act and is a means to take food off the mouths of Cross Riverians whom the Governor has sworn would never go to bed hungry – a promise which the fulfillment ratio remains unknown due to the dearth in statistical data.

The saddest part is the one where you drive in a vehicle alone with the air condition system turned on and you are still asked to wear a mask! What about the hands? Mr. Ayade and his advisers are not bothered about that? Or is it the about 3,000 bottles of 100ML alcohol based hand rub that will cater for the millions of residents?

In a photograph shared on Monday by his aides, Mr. Ayade was seen shaking hands with the head of the Davandy group, Mr. Asuquo Ekpenyong, who is the father to his finance commissioner, Asuquo Ekpenyong jr after the former presented him with a cheque of NGN25 million.

Has the professor and lawyer forgotten that the virus can be spread via handshakes hence the call for social distance? Is this being Kobo wise and Naira confused?

And on Tuesday afternoon, in another poorly thought event, the Governor, according to one of his spokesmen went to “flagged off” the “no mask no movement campaign” and behind him were over 20 aides clustered in one small space despite the ban on gatherings of more than five people. Who is deceiving the other?

Besides, some of the vehicles used to commute passengers are not worth up to NGN300,000. And, the distribution of the mask is yet to get to even the thousands of aides appointed by the Governor, what more do you expect of the average Cross Riverian when the upper class has bought almost every surgical mask left in the state at prices over 500 percent of the actual?

What about those trekking? Will their feet be impounded too? The endless debates on the roads, vehicular traffic and fights that will definitely arise from this directive will be the perfect recipe of confusion and will defeat the aim of social distancing. God forbid that a law enforcement officer gets infected and is asymptomatic, then steps into the road without gloves as is usually the case, the rest is better imagined.

Asides this, the ill conceived idea of giving almost forty cars to commissioners who already have cars to enforce the so called campaign is counter productive. It shows a process driven by politicians while law enforcement officials squeeze into rickety vehicles to enforce the directive. One complained bitterly that when they drove one vehicle to the lot, he had to trek back to join his colleagues.

This Olimpotic directive that Ayade believes will quabalistically densify his aim of preventing the novel coronavirus from entering Cross River state, may at the end, kinetically crystallize this meristematic pandemic and woe betide those who think their cotton clothing would prevent its spread.

The state had always said it was ready to contain the virus. The narrative later changed to measures being put in place to prevent COVID-19 from entering the state after the dearth in equipment and manpower at medical facilities owned by the state and the four bed isolation center became public knowledge.

There is no art in knowing Mr. Ayade’s intentions. But, this latest drama no matter the rhetoric, was poorly thought out and is being poorly implemented as well.

Jonathan Abang-Ugbal is a journalist and writes in from Calabar. He tweets via @NaijaJonathan

Chat us on WhatsApp
Advertisement
Previous article
Covid-19: Kwara begins contact tracing of 75 persons
Next article
‘’ The world needs more nurses and midwives’’ says WHO as it celebrates anniversary