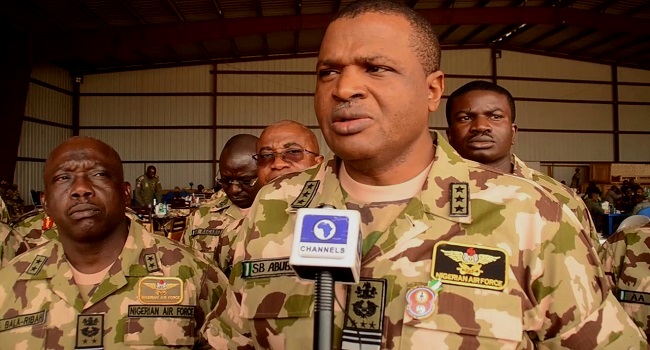 The Nigerian Air Force (NAF) says Boko Haram insurgents have returned to Sambisa Forest, Borno State, from where they were dislodged in December 2016.

Tajudeen Yusuf, Commander of the Air Component of Operation Lafiya Dole, made this known in Yola, the Adamawa State capital, on Friday while briefing newsmen on the progress of the counter-insurgency operation.

Yusuf said NAF fighter jets and attack helicopters had carried out 108 attacks on Boko Haram hideouts between April and July this year.

“On July 3, an air interdiction mission was conducted on Alagarno Camp. Several solar panels were seen on buildings in the location, which indicated that it was being used as a Command and Control facility.

“Intelligence surveillance and Reconnaissance reports through the second quarter of 2017 indicated a gradual return of the Boko Haram terrorist activities to the Sambisa Forest.

“The NAF conducted air interdiction missions with the F-7Ni, Alpha jets, L-39ZA, Mi-17 and the Mi-35M attack helicopters to neutralise the Boko Haram terrorist targets within the theatre.

“A total of 108 air interdiction sorties were conducted from April to June 2017.”

Yusuf however added that the rainy season had greatly hampered the operations of the military, as most times, flights had to be delayed or cancelled on account of poor weather.

On Thursday, Mansur Dan-Ali, Minister of Defence, also admitted that the rainy season had taken a negative toll on the counter-insurgency operations.

“The rainy season is a difficult moment for us,” he had said. “We cannot dominate the environment like what we did during the dry season but effort is geared towards regaining our areas.”