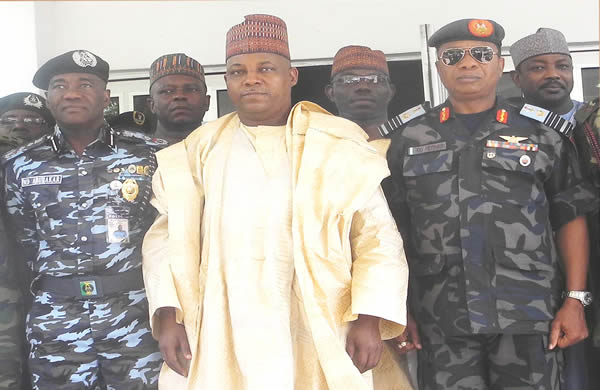 The Borno State Emergency Relief Committee on Thursday presented the sum of N500,000 each to the families of five policemen killed in Tuesday’s suspected Boko Haram attack in Dalori, near Maiduguri.

Chairman of the committee, Bulama Gubio, presented the money when he paid a condolence visit to the commissioner of police, Lawal Tanko, in Maiduguri yesterday.

Gubio also presented assorted food items, comprising bags of rice, semovita and palm oil, among others, for onward delivery to the families of the deceased.

He also announced that the state government would pay the medical bills of the over 100 victims of Boko Haram attacks who are currently receiving treatment in three hospitals in the state capital, including the University of Maiduguri Teaching Hospital, UMTH, which has the highest number of injured persons with 61.

The relief agency  chairman said that the gesture was to serve as a palliative aimed  at cushioning their economic hardship occasioned by the killing of the breadwinners of the concerned families.

Gubio said that the state government would provide more assistance whenever governor Kashim Shettima returned from his official trip abroad.

He commended the efforts of the police and other security agencies in fighting insurgency, and prayed for God to grant the bereaved families the fortitude to bear the loss and the deceased eternal rest.

Responding, the police commissioner expressed gratitude to the state government for the gesture and assured that the items would be distributed to the affected families judiciously.

Justice for FUOYE: SERAP, Eleka, others condemn killing of students by Nigeria…

Law enforcement agents look the other way as transporters in…

Nigerian police punish those who dare to ask for more…