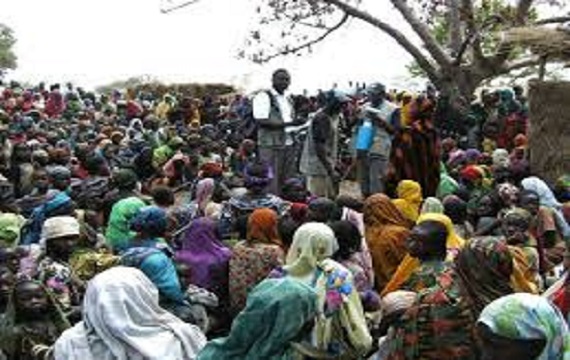 A lawmaker representing Gwoza in the Borno State House of Assembly, Ahmed Jaha, on Friday called on the National Assembly to ensure that the bill presently before it asking that Internally Displaced Persons, IDPs be allowed to cast their votes in their different camps during 2015 elections is passed speedily.

Jaha, who aspires to represent Damboa, Chibok and Gwoza at the House of Representatives in the 2015, made the called in Maiduguri, the Borno state capital.

It would be recalled that the bill to enable the IDPs to vote in places where their camps are situated, was sponsored by Mohammed Ndume, senator representing Borno South at the National Assembly and also an indigene of Gwoza, where Jaha hails from.

Jaha, who said that Gwoza local government area is the worst hit in the country by the Boko Haram, implored the federal government to make all efforts necessary to recapture the town from the  terrorists.

Gwoza town and several other local government areas in some parts of the three restive states of Borno, Adamawa and Yobe have been in the grip of the dreaded Boko Haram sect for a while.

“Currently there is a bill before the National Assembly seeking to allow IDPs vote in their respective camps. We hope and pray that the bill will be passed, so that our people will not be disenfranchised,” Jaha said.

The lawmaker applauded the Adamawa state government for helping the IDPs from Gwoza whose camps were situated in Uba, Yola and Mubi before they were moved to Maiduguri.

IELTS: Nigerians are questioning why they have to prove they…