Bribe allegation: Malami dares critics to report him to security agencies but, as AGF, he supervises prosecution

ATTORNEY-General of the Federation and Minister of Justice, Abubakar Malami, (SAN), has challenged persons behind reports that he received a bribe from Minister of Niger Delta Affairs, Senator Godswill Akpabio, to present the evidence to the security and law enforcement agencies for investigation and possible prosecution if the allegation is found to be true.

Akpabio has been alleged of ‎giving $5million bribe to Malami and some other unnamed influential persons to facilitate the appointment of a sole administrator for the Niger Delta Development Commission (NDDC).

The sole administrator in question, Effiong Akwa, hails from Akwa Ibom State, where Akpabio served as governor for two terms, from 2007 to 2015.

The AGF denied the allegation that he received gratification from the minister in a statement issued by his Special Assistant on Media and Public Relations, Dr Umar Gwandu.

However, the statement said the AGF challenged those behind the allegation to present evidence of the alleged bribery to security and law enforcement agencies.

“He (Malami), accordingly, encouraged the purveyors of the fictitious publication to approach relevant security and law enforcement agencies ‎and proffer information that could lead to the criminal investigation against him if they feel strongly about their purported claim,” the statement said.

But checks by The ICIR show that should the security and law enforce‎ment agencies investigate the matter and decide to prosecute Malami, he (Malami) will be the one to determine whether the case should be prosecuted, by virtue of his position as the Attorney-General of the Federation. 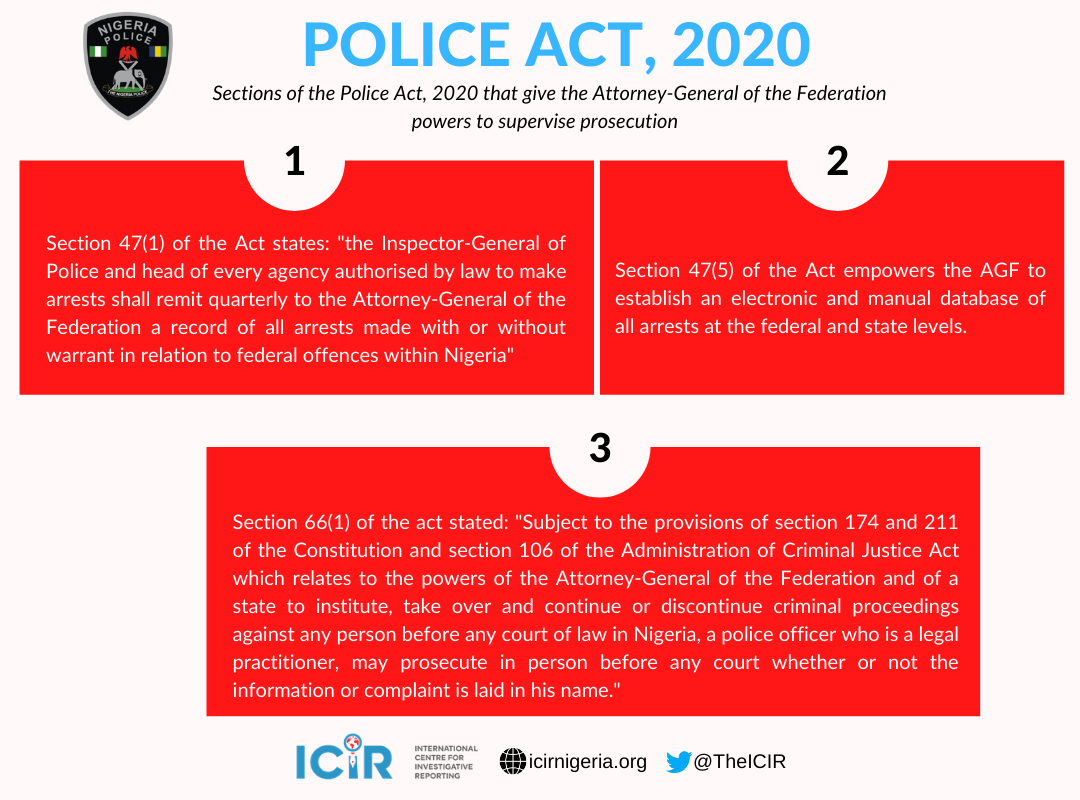 Also, in the event that it was decided that the matter should be prosecuted, Malami, as the AGF, would also supervise the prosecution.

Provisions of the 1999 Constitution, and the ‎Administration of Criminal Justice Act, gave the Attorney-General of the Federation, or any legal practioner authorised by him, the powers to undertake prosecution of all offences in court.

Also, the Nigeria Police Force (Establishment) Act, 2020, which came into force on September 17, 2020, also gave the Attorney-General of the Federation powers to ‎determine the fate of criminal prosecutions in the country.

Not only does the AGF ‎have the power to institute, take over and continue criminal proceedings, he could also discontinue prosecutions.

‎Section 66 (1) of the Police Act, 2020, ‎stated, “Subject to the provisions of section 174 and 211 of the Constitution and section 106 of the Administration of Criminal Justice Act which relates to the powers of the Attorney-General of the Federation and of a state to institute, take over and continue or discontinue criminal proceedings against any person before any court of law in Nigeria, a police officer who is a legal practitioner, may prosecute in person before any court whether or not the information or complaint is laid in his name.”

The law also required the police and other security and law enforcement agencies to make quarterly reports of all arrests made in relation to federal offences to the Attorney-General of the Federation.

Specifically, section 47(1) of the Police Act, 2020, stated that “The Inspector-General of Police and head of every agency authorised by law to make arrests shall remit quarterly to the Attorney-General of the Federation a record of all arrests made with or without warrant in relation to federal offences within Nigeria.”

‎Section 47(5) of the Police Act, 2020, empowered the AGF to establish an electronic and manual database of all arrests at the federal and state levels.

Also, some other sections of the Police Act, 2020, stipulated that the police should present reports of arrests made without warrant to magistrates, who will then forward same to the Criminal Justice Monitoring Committee, which would subsequently advise the‎ Attorney-General of the Federation.

The implication of the legal provisions is that, supposing those behind the allegation actually have evidence against Malami and decide to present them to the security and law enforcement agencies, they will only be reporting the AGF to institutions that are under his supervision and influence.

Going by constitutional provisions, if the security and law enforcement agencies eventually decide to prosecute the matter, they will have to get the authorisation of the Attorney-General of the Federation, which is Malami himself.

Meanwhile, the other minister mentioned in the bribery allegation, ‎Akpabio, has also denied giving the $5million bribe to Malami for Akwa’s appointment as NDDC sole administrator.

Akpabio denied the allegation in a statement issued by his media aide, Anietie Ekong.

Claiming that unnamed people who are uncomfortable with the forensic audit of the NDDC ‎were behind the allegation, Akpabio threatened to go to court over reports of the alleged bribery.

Akwa was named sole administrator of the NDDC on December 12, 2020, after President Muhammadu Buhari dissolved the Daniel Pondei-led Interim Management Committee, in response to a Federal High Court ruling which declared the IMC illegal.

The Sole Administrator had served as a Special Assistant, Finance, and Executive Director, Finance, in the NDDC but there are arguments that his appointment was contrary to provisions of the NDDC Establishment  Act, 2000, which does not provide for a sole administrator.

The law provided for a board but the commission is being run without a board.

There are also claims that Akwa is Akpabio’s ‘man’, having served as Special Assistant on Finance to Mr Bassey Dan-Abia, Managing Director of the NDDC between 2013 and 2015. Dan-Abia was a commissioner in Akpabio’s administration in Akwa Ibom State.

Also, stakeholders have expressed concern that as sole administrator, Akwa could be in a position to influence the forensic audit of the NDDC, which would cover the commission’s activities from inception till 2019 – including the period (2013 to 2015) when he (Akwa) was a key member of the Dan-Abia-led management.

Akwa’s emergence as sole administrator of the agency which was set up to address long-standing developmental challenges in the oil producing states has heightened tensions in the volatile region, with other ethnic nationalities in the Niger Delta kicking against his appointment and demanding its reversal by the President.

Some of the youths in the region have threatened violence if Akwa is not removed from the position.

Provide list of senators that received N20m as COVID-19…