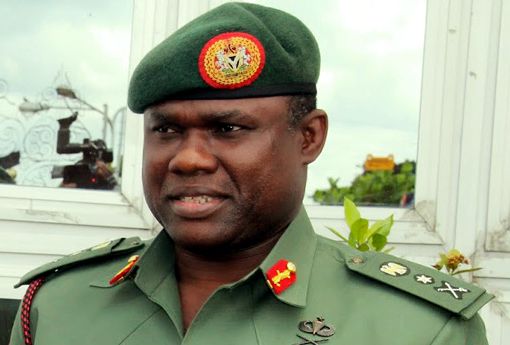 By Musdafa Ilo from Maiduguri

The Chief of Army Staff, Lt-General Kenneth Minimah, says President Muhammadu Buhari is determined to end the Boko Haram insurgency as soon as possible, hence, the relocation of the military command and control centre from Abuja to Maiduguri.

Minimah said this in an interaction with journalists in Maiduguri, Borno State capital, adding that the relocation of the centre will turn the tide against the insurgents.

“There will be change now and Nigerians should expect tremendous improvement in our fight against insurgents and terrorists. The time we’ve lost, we’re closing up. There is always going to be change except that we still have some administrative issues that we have to attend to in Abuja for other parts of the country but Mr President is determined to end this operation within short time,” the army chief said.

Minimah explained that moving the command centre to Maiduguri does not take away the responsibility of the General Officer Commanding, GOC, of the 7 Division, Maiduguri, who he said will still be in charge of prosecuting the war. With the coming of the centre, however, Minimah says optimism is high and called for support for the military.

“We are at war and what the military need is more support,” he said. “We’re highly optimistic that this time around, we will end the security challenge.”