Bypassing of Procurement Act, Contract splitting, other illegalities in Fashola’s ministry that cost FG about N9.38bn

THE Federal Ministry of Works and Housing under leadership of Babatunde Fashola engaged in fraudulent procurement, contract splitting and non-remittance of statutory deductions to the tune of about N9.38 billion, report obtained by The ICIR has shown.

Latest audit report from the Office of the Auditor-General of the Federation (OAuGF) listed 16 infractions against officials of the Works Section of the ministry. The ICIR also discovered most of these offenses flout the Public Procurement Act (PPA), 2007 and the Financial Regulations Guideline.

Monetary values of the 16 irregularities listed against the ministry’s officials is summed at N9,380,157,474.83. Though, Fashola oversees the ministry, the Federal Government had in 2015 announced Permanent Secretaries as accounting officers of their respective ministries. So, as of the period the anomalies were committed, Alhaji Mohammed Bukar was PS of the Power, Works and Housing Ministry.

Some of the concerns raised in the audit report include under and non-remittance of revenues generated by the MDAs, irregular expenditures including what the OAuGf described as ‘high magnitude of unretired advances’, among others.

“Overall, our findings are indicative of significant weakness in expenditure control, and financial reporting,” it states, adding that accounting officers in the MDAs had developed thick-skin towards improving some of the audit observations raised by the OAuGF.

In a letter with reference number C/AR.2018/CONF/VOL.1/01, Anthony Ayine, the Auditor-General of the Federation had earlier submitted first part of the report on October 16, last year to Clerk of the National Assembly as mandated by Section 85 (2) and (5) of the Constitution, for necessary reviews and action.

“The Auditor-General shall have power to conduct checks of all government statutory corporations, commissions, authorities, agencies, including all persons and bodies established by an Act of the National Assembly,” Subsection 4 of the Act reads.

However, in relation to the works arm of the ministry, part of the infractions recorded by the OAuGF includes the procurement of 36 Project Monitoring Vehicles at the cost of N343.83 million (N353,833,338) without due process. This flouts Section 24 of the PPA which mandates public procurement to undergo competitive bidding, except approved otherwise by the Bureau of Public Procurement (BPP).

Further findings revealed the procured vehicles had no record because they “were not received into store as there was no document to show such delivery.”

Aside the questionable purchase, another N139.90 million (N139,906,251.20) flawed procurement of photocopying machines parts, computer accessories, and vehicle spare parts was discovered by the Office.

The ministry had no store record to validate the purchase.

Also, N2.5 billion emergency repair of Talabu Bridge along Tegina – Mokwa Road, Niger State is one of the notable contracts the OAuGF identified the ministry’s officials breached the PPA. The awarded contract surpassed threshold. It was awarded rather than seeking the Federal Executive Council (FEC) approval.

Findings by The ICIR also showed (ERGP 12106525) only N1.20 billion was approved for some ongoing projects and emergency works in the 2018 approved budget of the ministry.

“Failure to comply with procurement rules and laws could lead to poor performance, abandonment of works or loss of public funds,” the Office stated while highlighting the risk involved in non-compliance.

OAuGF is the supreme audit institution of the federal government headed by Ayine.

The Office is empowered to statutorily promote transparency and accountability across MDAs and ensure proper management of the nation’s resources independently.

Besides its responsibility, it also partners with relevant regional and international organisations such as the World Bank, African Organisation of English-Speaking Supreme Audit Institutions (AFROSAI-E) in delivering its mandate.

As such, Ayine has repeatedly criticised non-compliance of some MDAs and late submissions of audited accounts and financial statements of federal government parastatals by their chief executives.

He described the trend to be of great concerns.

For instance, as of 2016, previous report from the OAuGF showed 65 agencies of government has never submitted their audited accounts to the OAuGF.

Records from the OAuGF further revealed that between 1993 to 2010, about 12 agencies defaulted in submitting their reviewed accounts.

Incidentally, the most recent report of infractions came at a time the country is grappling with recession, increased unemployment and fluctuating oil fortune due to the global pandemic.

More so, despite the 16 infractions listed against the work ministry, OAuGF says there was no official response from the ministry to defend the accusations as of the time of the audit.

The audit report further identified irregularity in the production and broadcasting of a special video documentary awarded by the ministry for N210.68 million (N210,686,730.00).

The above sum was reportedly split into two and paid into a staff’s private account after a chunk of it was approved for release by an undisclosed former Director of Finance and Account (DFA) at the works ministry.

“There was also no evidence to show the work was actually done.”

Again, it clearly contravenes Sections 713 of the Financial Regulations Act which states that, “personal money shall in no circumstances be paid into a government account, nor shall any public money be paid into private bank account. An officer who pays public money into a private account is deemed to have done so with fraudulent intention.

In its recommendation, the report, however, suggests the spent sum be returned to the Consolidated Revenue Fund and the DFA sanctioned for flouting the law.

In clear violation of the public procurement act, the audit report also accused the ministry of paying N43 million from N79,500,000 to its staff for an in-house design of road networks. Aside from flouting Section 42 of the PPA, the ministry’s non-compliance was said to have also denied FG of its accrued revenue from Value Added Tax and other necessary deductions summed at N4.3 million if the procurement had passed through the due process.

The DFA, in the same audit year was accused of approving N1.2 billion for the construction of Panyam-Bokko-Wamba road project in Nasarawa state without authorisation.

Similar wrongdoing was recorded against the ministry when it approved N320,465,187.41 for emergency rehabilitation of Kaduna-Zaria road without approval from the BPP. 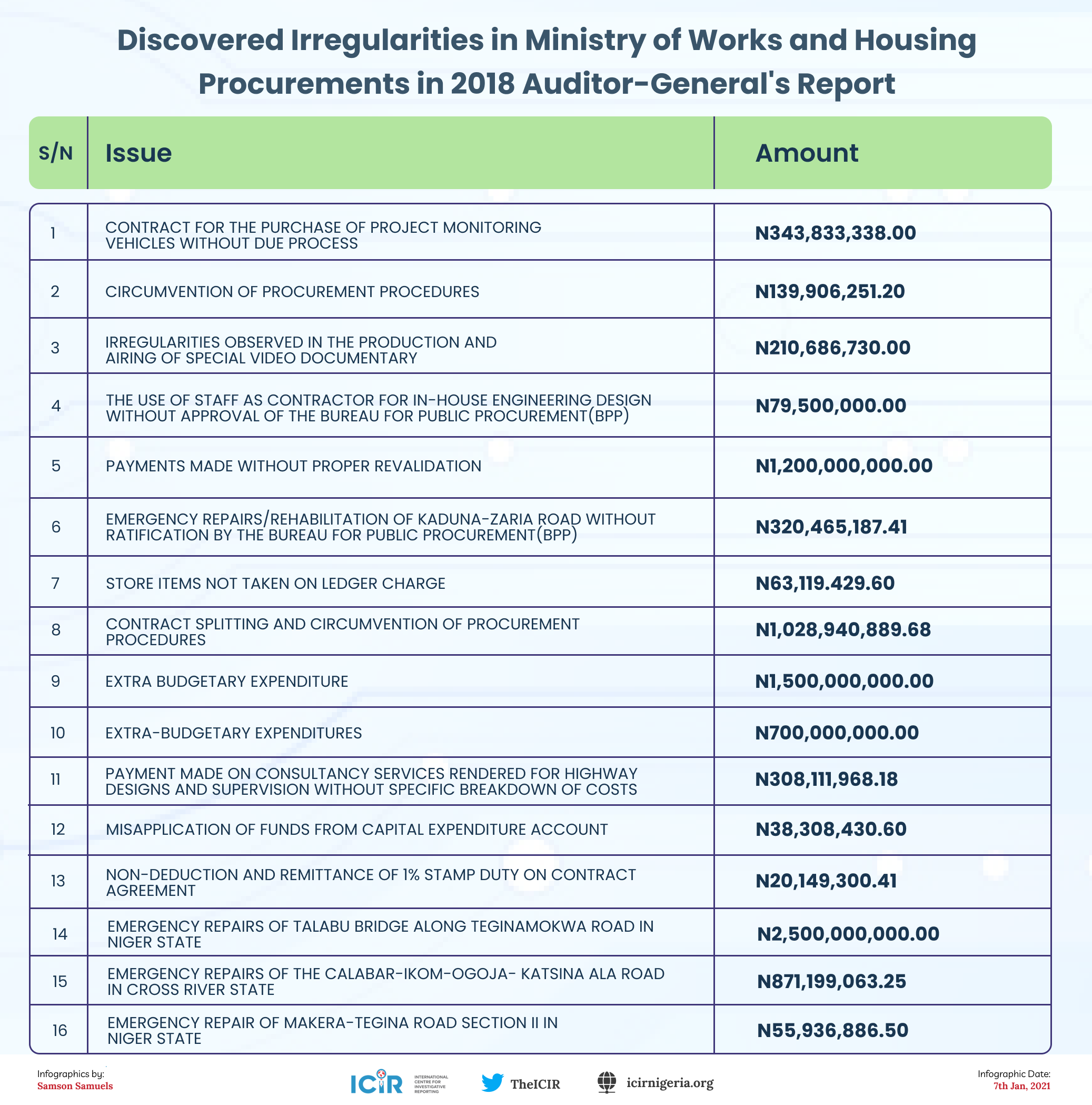 Also, there was an extra-budgetary expenditure of N700 million. The audit report revealed N500 million was initially paid as part of a N736 million budgeted sum for a N1.23 billion Pankshin-Ballang-Nyellen-Sara-Gindiri road project, Pankshin, Plateau State.

In another N920 million project which N720 million was budgeted for payment, a N200 million extra-budgetary expenditure was also discovered. The project was for the construction of Agaie-Katcha-Baro road in Niger State. So, a total of N700 extra-budgetary sum was penciled out by the OAuGF.

“In particular, on September 5, 2017, (51) separate contracts each valued at between N4.5 million and N9.4 million and totaling N216,633,322 were awarded to various companies all for the supply of stationery.

“The award letters were all signed by the same individual and this was just one example of similar contract splitting activities amounting to N1,028,940,889.68.” These among others were series of anomalies unearthed by the OAuGF against Works arm of the Works and Housing Ministry.

It is, however, unclear whether the anti-graft agencies have investigated MDAs that failed to submit their audited reports or violated Public Procurement Act and other regulations

Notwithstanding, the Economic and Financial Crimes Commission (EFCC) disclosed it was able to secure 865 convictions from a total of 1,305 cases it pushed to the court in 2020.

Though, no clear statement was made regarding cases bothering on the breach of procurement act and the likes, Mohammed Umar, Acting Chairman of the Commission revealed 7, 340 cases are still being investigated from 10, 152 petitions received by the Commission.

The ICIR contacted Wilson Uwujaren, the EFCC spokesperson but his line was unreachable.

On January 6, a text was sent to his line but was not replied. The next day, his line was tried but it was still out of coverage.

The Independent Corrupt Practices and Other Related Offences Commission (ICPC) was also contacted through Aruba Nwunye, the Spokesperson but she did not respond to phone calls.

“I am not aware of any actions for now,” she later replied in a text message. Efforts to get Bukar’s contact through website of the Office of Head of Service of the Federation failed.

Mrs. Oyeboade Akinola, Director of Media and Public Relations in the ministry did not respond to calls made to her line as well. Text message sent to her was also ignored.

NINETEEN young children and two adults have died from a shooting at Robb Elementary...

PRIOR to his conviction for impersonation and forgery, a former member of the House...
Advertisement