SPOKESPERSONS at the State House are in disagreement about who is president Buhari’s economic adviser.

This conflict emerged as a result of a report by The ICIR establishing that money has been allocated and released to the Office of the Chief Economic Assistant to the President (OCEAP) for research studies in 2017, and the studies remain unavailable in the public domain.

Based on Shehu’s confirmation, The ICIR on Wednesday reported Dipeolu as the head of the OCEAP, which according to records,  has been paid N33.7 million to conduct “evidence-based research studies on all aspects of the Nigerian economy that will help the President in formulating sound strategies and policies”.

Following a text sent to Shehu on Wednesday asking him to confirm “the person presently acting in the capacity as Chief Economic Adviser”, the senior spokesperson gave the answer as “Dr Adeyemi Dipeolu”.

On Thursday, when he was again called for clarification, he said the Chief Economic Adviser works in the office of the Vice President and directed the reporter to “talk to Laolu”.

Laolu Akande has however insisted that Dipeolu has only served as a ‘special adviser’ to the president on economic matters, an office domiciled in the office of the vice president.

“….You are saying because Mr Shehu told you that Dr Dipeolu is the ‘chief economic adviser’ when his title says he is a ‘special adviser’…,” he said. “So, if somebody told you too that I’m the minister for information, you’ll just believe it because he said it.”

The vice president’s spokesperson also said those who can provide information on how  OCEAP receives budgetary allocation are directors and civil servants at the office of the president.

“The control of those resources, if there is anything coming in or going out, will have to be in the office of the president,” he explained.

“The man [Dipeolu] doesn’t know anything about the money. He doesn’t have control over the money. Since there is no chief economic adviser, the people that manage the resources of the office of the president are the ones that can tell you what happened to the funds.”

N326m budgeted, N86.2m released for capital projects: Who is in charge?

In spite of the explanation by the  VP’s spokesperson,  it remains unclear who has drafted and submitted budgets for the Office of the Chief Economic Adviser and authorised withdrawals from allocations released from the nation’s treasury. 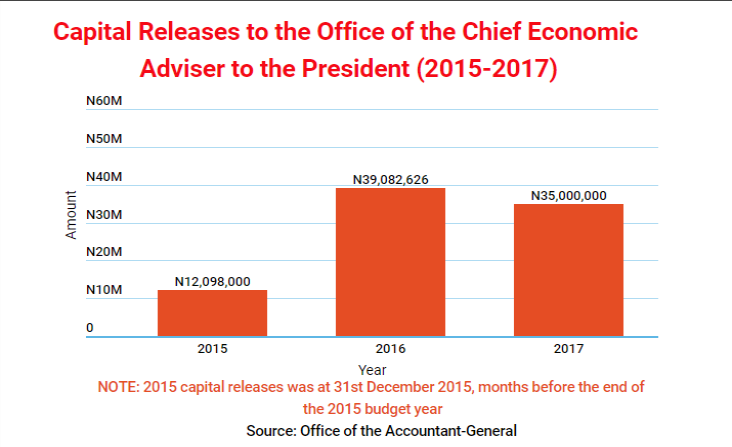 Of this amount, documents from the office of the Accountant-General reveal that a total of N86.2 million has been cash-backed for capital costs in the three years of the incumbent administration.

In response to a text message requesting information about who is responsible for OCEAP’s budget and expenditure,  Shehu directed The ICIR to the special adviser on economic matters whom again he identified as Dr Dipeolu.

“Dr Dipeolu, the Economic Adviser to the President should be able to answer your questions,” Sheu replied.

Those unwilling to forgive Pantami are Nigeria’s…