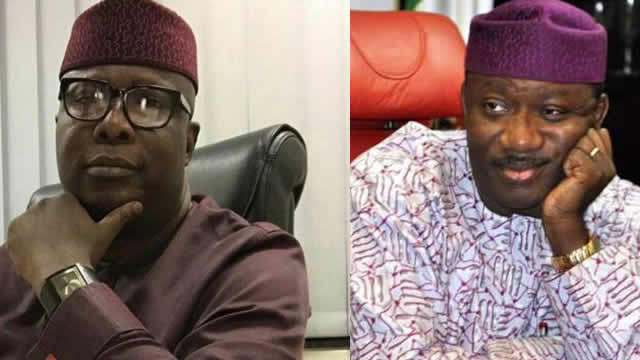 THE intra-party crisis within the ruling All Progressives Congress (APC) in Ekiti State has taken another form as two emerging factions in the party have issued two separate suspensions to party chieftains including Kayode Fayemi, the Governor of the state in less than 24 hours.

On Wednesday, a faction in the party loyal to the Governor said it has suspended Babafemi Ojudu, a presidential adviser and former senator,  and 10 other party leaders.

The faction said the 11 members were suspended for allegedly disobeying the directive of the party’s National Executive Committee (NEC).

Ade Ajayi, the State Publicity Secretary of the APC, disclosed this in a letter titled, ‘Indefinite suspension of some members of Ekiti State Chapter of APC’.

The letter reads, “The State Executive Council of the Ekiti State chapter of APC has approved the indefinite suspension of the following members with immediate effect from 23rd September 2020.

“The suspension is based on the recommendation of the Investigative/Disciplinary Committee inaugurated by SEC to investigate the disobedience of certain members to the directive of NEC of 25th June, 2020, which directed members of the party not to institute any court action and to withdraw existing cases in courts.

“The decision of SEC has been communicated to the caretaker/extraordinary convention planning committee of the party.”

However, in a counter-reaction to the suspension of Ojudu, and 10 other party leaders the other faction on Friday suspended the state governor, Kayode Fayemi from the party.

The faction led by  Anthony Adeniyi announced the suspension of  Fayemi from the APC for alleged anti-party activities.

The faction also described the rival faction led by Paul Omotoso-led state executives of the party as illegal.

The Adeniyi-led executives backing Ojudu and the other allegedly suspended ten members by the faction loyal to Fayemi stated in a communiqué that Fayemi was suspended for anti-party activities, particularly for his role in the Edo election.

The communiqué read, “After painstakingly reviewing the activities of some members of the APC in Ekiti State, we the authentic members of the party in the State and members of SEC per Section 12.8 of the APC Constitution being duly constituted members of the National Convention of the Party, rose from its meeting of the 23rd September 2020 with some far-reaching resolutions.

“That Dr Fayemi, the Executive Governor of Ekiti State is hereby suspended from the party in view of his numerous anti-party activities especially his role in the recently concluded governorship election in Edo State, which is contrary to the provisions of Article 21 (A) (ii) of the APC Constitution.

“The Paul Omotosho led faction of the APC Executive in the state is hereby declared illegal and suspended from the party for failure to emerge in accordance with the Constitution of the Party.

“Senator Adeniyi, as a statutory member of the SEC going by our party’s constitution, was elected by all members attending as the Acting Chairman of the State Executive Committee in the absence of direction or directive from the National Body. He is as such the only one thus capable to call the SEC meeting as duly required by the constitution from henceforth.”

Restructuring was not in APC’s manifesto ― Bisi Akande