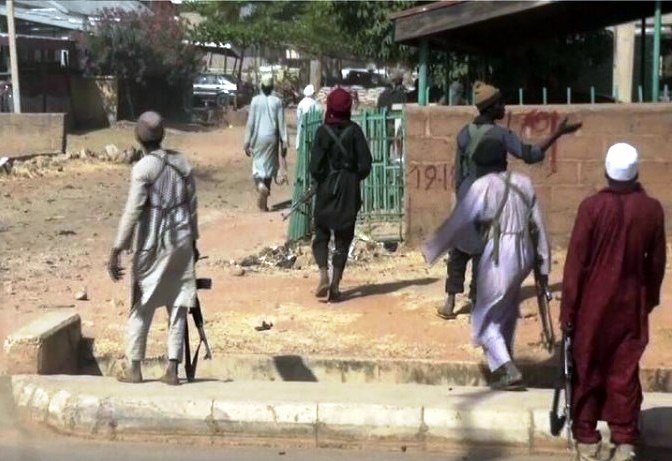 Boko Haram terrorists have beheaded seven people in Mildo community in Madagali Local Government Area of Adamawa State just three months after a similar attack on the community was repelled by the army.

The attack, which took place between Tuesday night and Wednesday morning, comes less than 24 hours after service chiefs temporarily relocated to Maiduguri the Borno State capital on the orders of Acting President Yemi Osinbajo.

Two women were also injured in the attack, while the insurgents torched many houses in the area.

In April, Akintoye Badare, a Major and Army Public Relations Officer of the 28 Task Force Brigade Mubi, told journalists that the troops successfully repelled a Boko Haram attack on Madagali and Liman Kara, a town in neighbouring Borno state.

Badare, a Major, had said the operation lasted one and half hours, adding that the soldiers also captured three Chadians who were members of the terrorist group.

Madagali was first captured by the Boko Haram insurgents in 2014 but the town was liberated by the Nigerian military months later.

In January, Madagali witnessed a series of suicide bomb attacks that led to the loss of several lives.

On Monday, Osinbajo ordered the service chiefs to relocate to Maiduguri, following an ambush by the terrorists on a federal government oil exploration team .

More than 50 members of the team were killed by the insurgents while some of them were kidnapped.

In a video released by Boko Haram after the attack, three of the abducted persons were seen begging the government to cooperate with the terrorists to facilitate their release.

Chat us on WhatsApp
Advertisement
Previous articleGraduate at 21, master’s holder at 24, professor at 38… meet Owasanoye, the new ICPC chairman
Next articleBAT faces prosecution for ‘bribing’ government officials in African countries