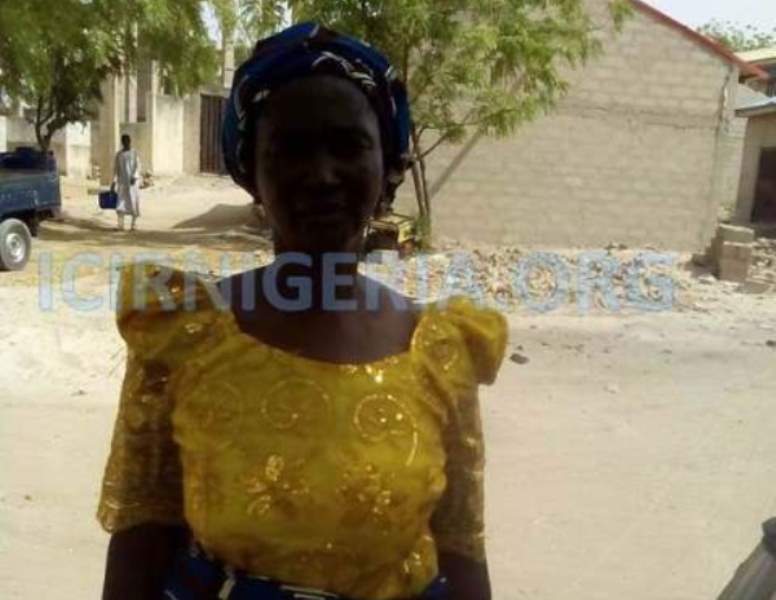 Over 200 girls abducted in Chibok in April 2014 are being held in Gwoza town in Borno State, a woman who was recently released by Boko Haram has told the icirnigeria.org.

She had been held in the same location as the abducted Chibok girls.

The 56 year old woman, Mbutu Papka, who was kidnapped in July, 2014 and held by the insurgents for eight months in two locations, said confidently that the abducted girls were being kept under very tight security in a house in Gwoza.

Papka said that nobody is allowed near the fenced building where the abducted girls are being held under 24-hour security. Even the heavily armed guards who keep watch over the girls round the clock, it was learnt, are only allowed to go into the house to deliver food, water and other supplies to them.

The woman was seized along with others when Boko Haram attacked Gwoza on July 4, 2014 and taken to Mdita, a remote village near the notorious Sambisa Forest, bordering Askira Uba, Damboa and Gwoza.The abductees, who included many children, according to Papka, were kept in Mdita for five months before being transferred to Gwoza, where they were held for three months before they were finally released on March 15.

It was while in Gwoza that she learnt that the Chibok Girls, whose abduction has attracted global attention, were being housed in a compound adjacent to where she and other kidnapped people were kept.

Asked how she knew the girls were there, Papka said she never saw the Chibok girls, but explained that people in the area pointed at the heavily guarded flat and said the girls were inside.

Because access to the house was restricted, she said, the girls apparently did their own cooking and chores by themselves.

“In the camp at Gwoza, there were clear demarcations between where people were kept. The Chibok girls, other captives and Boko Haram members and their family members all had their separate areas secured, though the security in the area where the girls are kept is visibly different and much tighter,” she said.

Papka explained that the conditions under which the captives in Gwoza were kept were fairly tolerable and far better than the first location, as there was water supply.

She said that after they were taken to Gwoza, their living conditions improved remarkably because the town has modern facilities, as opposed to the rustic Mdita.

“When we got to Gwoza, things changed because there were facilities there and the place was 10 times better than Mdita. We had a normal life in Gwoza, except the trauma of living in captivity. Whatever we wanted to eat, they were provided. They would bring water, firewood, etc., and leave them outside,” she explained.

A few other comforts were provided.

“They even provided perfume for anyone who requested for it,” she added.

According to her, at Mdita, she met other abducted people including women and children, among whom were many under the age of seven, all living in terrible conditions.

“There was a room we used to urinate in and because of lack of water, the place stank and maggots were everywhere. We took our baths once a daily, if we were lucky,” she said.

Because of the terrible conditions and absence of health care facilities in the camp, many people fell sick and some died.

“There was a Redeemed Christian Church of God pastor who was killed during the attack on our village, and his wife was abducted with us. She died at Mdita due to the condition of the place and the death of her husband,” she told our reporter.

The pastor’s wife, she explained, had diabetes and, before her abduction, had been on a special diet which could not be provided by the insurgents.

Papka said she and the other women were not raped or assaulted, though she could not speak for the Chibok girls because nobody was allowed to see or interact with them.

She also said that the Boko Haram men lived with their wives and children in the Gwoza camp, but kept away from others and cooked their own meals.

On March 15, 2015, after three months in Gwoza, Papka and 10 other older women were taken from the camp, herded into a vehicle and driven to Izge, a village, from where she was taken to her own village on a motorcycle because the road is bad.

The ride, however, was not free.

“I was asked to pay N8, 000 for the motorcycle ride, which I collected from my family,” she stated.

This website also learnt that a two years old boy was given to Papka when she was released. The boy, who is reported to be sick and has rashes on his body, has since been reunited with his family, which is now seeking financial assistance to take the child to hospital.

“He was crying uncontrollably, so they (Boko Haram) handed him over to me as were leaving,” she said.

Gwoza local government area of Borno State, which is just over 100 kilometres from Maiduguri, the state capital, is said to be one of the council areas still wholly in the hands of Boko Haram terrorists.

Gwoza town was first captured by the insurgents in August last year, following a heavy gun attack by insurgents who hoisted the sect’s flag and declared it the headquarters of the group’s Caliphate.

Over 12,000 persons were displaced from the town and repeated attempts by the military to recapture it in the past have failed largely due to the hilly terrain, which provide hiding places for the terrorists from which to operate.

This website has learnt that it is not the first time that released Boko Haram abductees have claimed to know where the Chibok girls are being held.

Emman Shehu, a founding member of the Bring Back Our Girls group, told our reporter during the week that a young girl who was released last week and an elderly woman had previously claimed that the Chibok girls were being kept in Damboa and Sambisa area.

Shehu, who is also director of the International Institute of Journalism, Abuja, said: “Two people, a young girl and an elderly lady have said in the past that they know where the Chibok girls were being kept, the girl saying that only last week.

“We have heard people say in the past that they know where they are. We heard before that some of them were in Damboa, but the military has reclaimed Damboa and they did not say the girls are there,” he said further.

The whereabouts of the Chibok girls has been a mystery since April last year when they were kidnapped while writing exams in their school.

Shehu, who lambasted the military for the manner it has handled the abduction of the girls, said that since April when they were kidnapped, the military has made no attempt to rescue them.

If there had been any rescue mission, he observed, the military would have been giving regular updates about the progress being made in that effort.

“There has never been a rescue mission by the Nigerian military to free the Chibok girls,” he said, adding that the federal government and defence headquarters have not shown seriousness or the political will to rescue the girls.

For example, Shehu said, the Bring Back Our Girls group learnt during the visit of Yousafzai Malala, the Pakistani girl-child education activist, to Nigeria, that the 57 girls who had escaped from the insurgents had not been debriefed either by the military or any other security agency.

More than 200 young girls were abducted by Boko Haram gunmen at the Government Girls Secondary School, GGSS, Chibok, on April 14, 2014, the same day that suicide bombers wreaked havoc in Nyanya, on the outskirts of Abuja, the Nigerian capital.

It was reported that the 276 girls who were writing their final West African School Certificate, WASC, exams were kidnapped when the insurgents attacked the town pretending to be security guards and asked the girls to come with them.

What followed, particularly the reaction from the Nigerian government, caused a lot of outrage that eventually changed the dynamics in the fight against the sect.

Less than 48 hours after the abduction and Abuja bomb blast, President Goodluck Jonathan was pictured dancing at a rally in Kano, and it took him almost three weeks to publicly speak about the incident, saying government was doing all it could to free the girls.

It was also reported that the Nigerian military had four hours intelligence prior to the kidnapping, something the military later admitted, but said its over-stretched forces could not immediately send in reinforcements.

The government’s attitude drew widespread criticism and protests against its response, which was viewed as tepid.  Protests were also held in major Western cities, including Los Angeles and London.

At the same time, the popular movement for the release of the girls, the Bring Back Our Girls group, was formed. The movement’s hashtag, #BringBackOurGirls, attracted more than 2 million tweets within its first week.

The Chief of Defence Staff, Air Marshal Alex Badeh, once said that the military had located the girls, but ruled out a forceful rescue mission for fear of harm befalling the abducted girls.

On July 23 and 24, 2014, vigils and protests to mark 100 days of the abduction were held in Nigeria, Pakistan, India, Bangladesh, Togo, the United Kingdom, the United State, Canada, and Portugal and following global attention brought by the abduction, the UK, US, France, China, Canada, Israel and the European Union all offered support to Nigeria.

But despite all concerted efforts by Nigeria and other nations, the abducted girls have remained in captivity, with no clue about their fate.

If Papka’s present condition is anything to go by, even if the girls have not suffered any physical abuse, the emotional and psychological trauma inflicted by their experience would be, indeed, enormous.

Our reporter learnt that Papka’s experience appears to have left a permanent impact on her. Her children say she is like a stranger to them. She is easily scared by sounds and approaching footsteps and prefers to stay alone, not talking to anyone.

These are apparently effects of her abduction and detention by the insurgents. Sadly, there is no mechanism put in place either by the state or federal government, or even civil society organisations, to provide any kind of counselling or medical care and assistance for her.

It was learnt that the Borno State government is aware of the release of the 11 women by Boko Haram as their return home was widely celebrated in many villages, but as at Wednesday morning, ten days after, no state official has visited any of them or offered any kind of assistance.

On Wednesday, when our reporter talked to one of her relations, she said that the family was planning to take her to see a psychologist.

Attempts by the icirnigeria.org to share information about the girls’ whereabouts with the military and get its reaction were not successful, as the Director of Defence Information, Major-General Chris Olukolade, said in a phone conversation that he was out of town.

Although it was agreed that the information was too sensitive to be shared on the phone and that a face-to-face meeting was necessary, Olukolade, who said that he would get back to Abuja on Tuesday, had not returned or gotten back as at the time of going to press.

NDLEA to operatives of sister security agencies: You won’t…