DUE to the current negative growth of -6.10 percent recorded by Nigeria in its Gross Domestic Product (GDP), economic experts have urged Nigerians to brace up for hard times.

They argued that it may be difficult for avert the looming economic recession because Nigeria’s main revenue base, the crude oil is badly affected by the COVID-19 pandemic.

On Monday, August 24, the National Bureau of Statistics (NBS) in its GDP report for the second quarter of 2020 revealed that Nigeria’s GDP had contracted by -6.10 percent.

The decline was largely due to significantly lower levels of both domestic and international economic activities during the quarter, which resulted from a nationwide shutdown aimed at containing the COVID-19 pandemic. 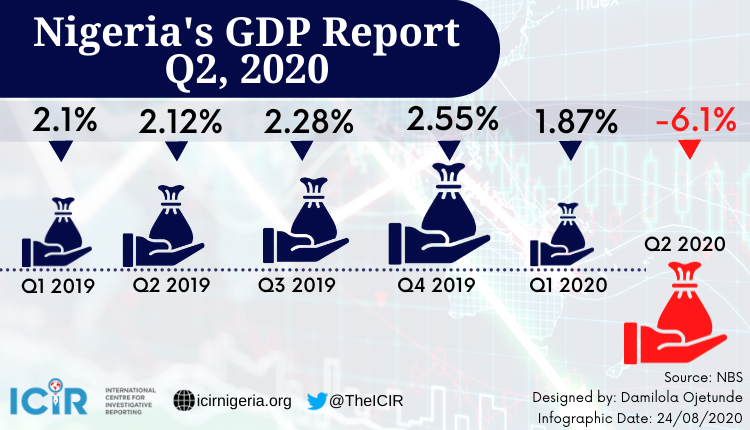 Seyi Kolawole, a Research Analyst at the NASD Plc says Nigerians should prepare for the hard times. In a phone conversation with The ICIR, Kolawole said it would be very impossible for Nigeria not to plunge into recession in the next quarter when the next report will be released by the NBS.

He also said the effect might be more serious because of the COVID-19 pandemic.

“We are not strangers to a recession, because it is going to be a repeat of what has happened when we dipped into recession the last time, just that it might be a bit more serious because of the coronavirus,” Kolawole said.

When asked about what the government can do to avert a recession from happening, Kolawole said: “it may be a bit difficult to avoid that from happening this time, considering that Nigeria is an oil-dependent country.”

“We could have argued it if Nigeria’s economy was a diversified one, however, with the shutdown of economic activities across international borders due to COVID-19, it will be more difficult to avert.”

Also, Bismarck Rewane, a re-known economist who also is a member of the Presidential Economic Advisory committee said the NBS report was not “alarming at this point in time but “surprising and concerning.”

“The truth is that the economy had its pre-existing conditions in Q1 and the lag between the slow down and the contraction was underestimated by all analysts,” Rewane said in an interview with Channels Television on Monday.

He pointed out that the Federal Government’s stimulus plan for the economy was inadequate to cover for the shortfall recorded by the NBS.

“We have a N2.5 trillion equipment to fight a 12 trillion contraction,” he said. “So the limitations and inadequacies and inappropriateness of the tools, compared to the problem we have, is stacked.

Rewane added that the country was now faced with a quadri-dilemma, a situation in which a choice must be made between four undesirable options.

“The first variable we are looking at is recession, negative growth,” he said. “The second variable is high inflation, which is almost 13 per cent.

“The third variable is high unemployment; even though the unemployment numbers are at 28 percent, we think that it is much more than that. Finally, we have weaknesses in currency.”

“So we are having external weaknesses and vulnerabilities, slow growth, high unemployment, and, more than anything else, contraction in economic activity.”

“Now we are going to move away from the monetary policy complement that we have, stimulate the economy with greater catalyst, and do some things differently.”

Earlier in the month, the NBS reported that Nigeria’s inflation rate jumped to 12.82 percent and the unemployment rate at 27.1 percent.