ON June 19, a news report by TVC News Nigeria claimed that security agencies foiled a planned attack by a terrorist group, Hezbollah, on Ikoyi and Lekki areas of Lagos state.

The report, republished by several blogs including Today.ng, gistville.com, thestreetjournal.org, Nairaland.com, with all of them quoting TVCNews, was also shared on Twitter by Osaretin Victor Asemota with username @asemota on June 20.

“A major operation by the Islamist group Hezbollah was foiled in Lagos with the arrest of Ali Mohammed el hassan in Ikoyi overnight.

“Details of this operation have not been revealed because of the highly sensitive nature of the plot – TVC News gathered from a source that Hezbollah under the leadership of Mr El Hassan had planned a major attack on Ikoyi and the Lekki areas of Lagos.

“Nigerian security agencies acted on a tip from international intelligence and apprehended the suspect at an undisclosed location in Ikoyi,” TVCNewsNG had reported.

A fact-check by The ICIR revealed that the news report had been pulled down on the TVCNews verified Instagram account and website which initially published the report.

However, The ICIR was able to retrieve a cached version of the webpage using Google verification tool. (See screenshot below). 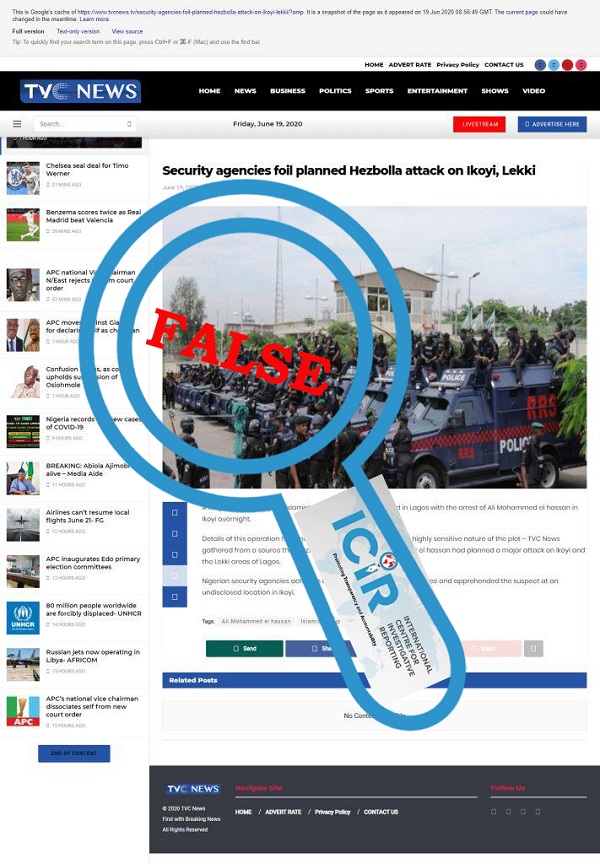 But when The ICIR contacted the Lagos State Commissioner for Information, Mr Gbenga Omotoso, he said he’s not aware of such development.

“I am not aware of the news,” he told The ICIR via phone call.

In order to further verify the news, The ICIR contacted the security agencies, namely the Police, State Security Services and the Nigerian military.

“I can’t speak on the news because the news said security agencies and not the police, which I represent,” Police Spokesman for Lagos Command, Bala Elkana, told The ICIR. 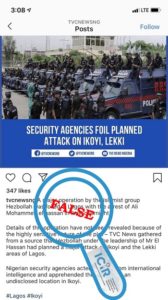 Also, the Nigerian Army spokesperson, Sagir Musa, said he is unaware of such report.

“I am unaware of such,” Musa told The ICIR in a brief telephone conversation.

Based on all available information obtained by The ICIR, it is evident that the report is FALSE.

10 key facts on African free trade which started on January…