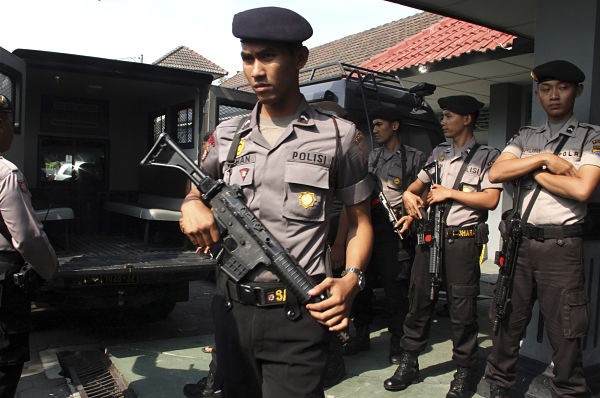 The federal government has stepped up diplomatic efforts to stop the execution of three Nigerians in Indonesia over their involvement in drug trafficking offenses.

At a meeting Monday with the Indonesian Ambassador to Nigeria, Harry Purwanto, in Abuja, the permanent secretary, Ministry of Foreign Affairs, Danjuma Sheni, urged the diplomat to help prevail on his government to convert the death sentences to lfe imprisonment.

Sheni also urged the ambassador to expedite action on the exchange of prisoners between both countries.

“We want to appeal to you and through you to your government that this death sentence that may be carried out on Salami any moment from now should be converted to life imprisonment.

“I am also to use this occasion your Excellency to appeal to you on the need to quickly complete the on-going prisoner-exchange negotiations that we have with your country,” the permanent secretary stated.

He further stated the federal government’s desire that “this be completed on time so that our nationals who may be caught up there would have their opportunity to serve their sentences in Nigeria”.

Responding to the permanent secretary, the ambassador affirmed that Indonesia still upheld death by execution as the penalty for drug related offenses, as the country had made it clear that engaging in drug trafficking into Indonesia is risking death.

“We still recognize the death penalty in our criminal justice system in some serious crimes including terrorism and narcotics and some other things,” he stated.

He added, however, that the execution penalty noes not apply yo children and other vulnerable persons.

“We do apply these executions to those who are adults and we will not apply it on children or pregnant women or mentally ill persons and we have already made this known that doing this trafficking of narcotic in Indonesia is risking your death penalty before even coming into Indonesia” he said.

However, reports from Indonesia indicate that chances of deflecting the death sentences hanging over the heads of the three Nigerians appear to have grown slimmer, as an Indonesian court has dismissed an appeal against the Indonesian President Joko Widodo’s rejection of a clemency plea tendered by one of the convicts.

The appellant, Jamiu Owolabi Abashin, had appealed against President Joko Widodo’s rejection of his clemency plea in the administrative court yesterday it was dismissed on the grounds that courts do not have jurisdiction over presidential decisions.

The appellant’s lawyer, Utomo Karim, has declared that he would appeal the ruling and also seek a judicial review for Abashin in the Surabaya district court on Wednesday, by arguing that the entire prosecution of his client’s case was illegal because it was based on his fake identity.

According to Indonesian records, a man purporting to be Raheem Agbaje Salami, from the southern Spanish city of Cordova, was arrested in 1998 smuggling 5.3 kilograms of heroin into Surabaya, the second largest city in Indonesia.

Further investigations revealed that Raheem’s passport was false and his real name is Jamiu Owolabi Abashin.

The two other Nigerians on death row in Indonesia are Okwudili Ayontanze, a gospel singer, who plays music with prison guards and has released albums from his Nusakambangan prison, and Silvestre Obiekwe, who is reported to have angered authorities by allegedly continuing to run a drug syndicate from behind bars.