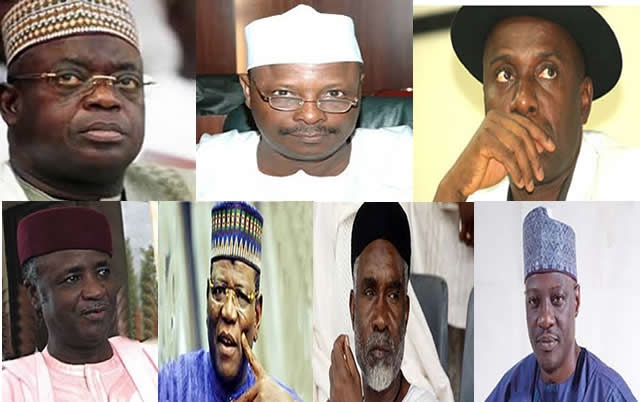 Five governors of the ruling Peoples Democratic Party, PDP, are believed to have joined the opposition All Progressive Congress, APC, in Abuja on Tuesday.

Competent sources in the APC told our reporter this afternoon that all the seven governors would have publicly decamped from the PDP but that for strategic reasons governors Aliyu Babangida (Niger) who is the chairman of the G7 governors forum and Sule Lamido (Adamawa) would remain in the ruling party for the time being.

Nasir el Rufai, former minister of the Federal Capital Territory, FCT, and the deputy national secretary of the APC in a twit this afternoon gave indications that the New PDP formerly merged with the APC today.

According to his twit, the two parties signed a merger agreement in Kwankwaso’s residence and the interim national publicity secretary of the APC, Lai Mohammed, is expected to provide details of the union later today.

El Rufai’s twit read thus:  “At the residence of the Kano State Governor, Dr. Rabiu Musa Kwankwaso this morning, and after exhaustive deliberations, New PDP has merged with the APC. Merger agreement has been signed by the chairmen of the two parties. Await details from Lai Mohammed, the APC National Publicity Secretary.”

Our source said that members of the New PDP in the National Assembly are expected to publicly declare for the APC in the next few days although he disclosed that not all the members are ready to follow their governors.

“We have no problem in the House of Representatives. All the members of the New PDP are with their governors and are going to publicly move to the APC in the next few days. However, in the Senate, we face some problems as some senators in both the PDP and New PDP, even one or two in the APC are not fully with us,” the source said.

One of the senators who do not want to dump the PDP for the APC, it was gathered, is one of the three senators from Kano State whose governor is believed to have dumped the ruling party today.

Our source said the first test of the strength of the political realignment would manifest in the National Assembly in the coming days as the APC would now have a majority in both chambers of the legislature.

According to him, Aminu Tambuwal, who is expected to dump the PDP publicly in a matter of days, would remain as Speaker of the House while David Mark, the Senate President, would be given the choice of joining the APC to retain his seat or be forced to yield it to George Akume, the minority leader.