Here are allegedly corrupt ex-governors heading to the 9th Senate 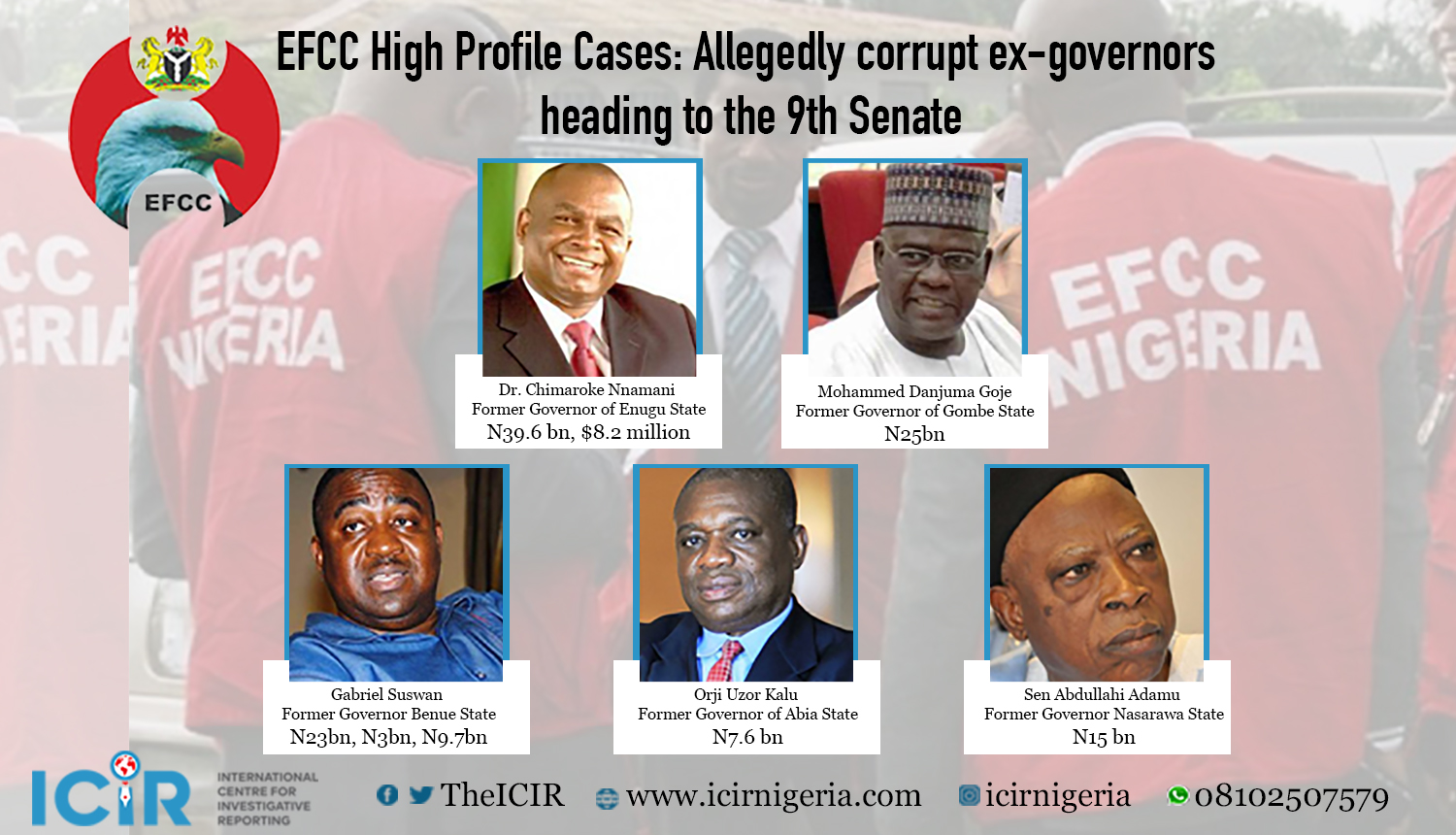 SOME Nigerian governors– incumbent and former– have won the last election and are set to join the 9th Senate, but a good number of them are on the corruption list of Economic Financial Crimes Commission, EFCC, the agency that investigates Nigerians who fraudulently enrich themselves.

Most of these men of power have evaded conviction by deliberately delaying prosecutions instituted by the EFCC. Cases against some of them,  listed as ‘high profile’ by the EFCC, have lingered for more than a decade.

In this report, The ICIR  profiles these governors who will be making laws for Nigerians, including the anti-corruption laws.

Seventy-three years old Abdullahi Adamu was a two-term governor of Nasarawa State from 1999-2007. The ex-governor was succeeded by Tanko Al-makura, who also spent eight years as the state administrator. Adamu, a current member of the eighth assembly is warming up to continue work as a legislator in the ninth assembly, though he is being accused of looting the state treasury while in office. Adamu, a die-hard loyalist of President Muhammadu Buhari has been in the Senate since 2011.

The septuagenarian made the EFCC list in  March 2010 and his case ranked among the high profile corruption cases. His name also features in the United States Department of Justice profile of top 16 nationally prominent political figures charged under Farida Waziri, a former EFCC Chairman, who replaced Nuhu Ribadu.

“Joshua Dariye and Abdullahi Adamu, former state governors of Plateau and Nasarawa, respectively, have both been arraigned by the EFCC on corruption charges but won elections to the Senate in the April 2011 elections,” the report stated.

In the case referenced FHC/LF/CR8/2010, the EFCC charged the former governor alongside his accomplice for corrupt practices and money laundering while in office up to the tune of N15 billion.

According to the EFCC, the case has been pending at the Federal High Court, Lafia, due to an interlocutory appeal. Till date, the  “trial is yet to commence.”

Adamu’s Son, Mohammed was also charged with an alleged fraud of N92 million.

Though the senator-elect representing Nasarawa West Senatorial Zone, under the All Progressives Congress (APC), has denied the allegation, the case is still among high ranking corruption cases in the database of the anti-graft agency.

The senator-elect, representing Enugu East Senatorial District, Chimaroke Nnamani governed Enugu State for a two-term of eight years. He was rated number seven on the list of 10 nationally prominent figures prosecuted under the EFCC chairmanship of Nuhu Ribadu. The list, contained in the database of the United States Department of Justice also includes Jolly Nyame, a two-term former governor of Taraba state among other high-profile cases. Nyame is currently serving a 12-year jail term.

As an ex-governor, Nnamani initially was accused of 34 count charge before it was reviewed to 105 charges, including embezzling state estimated at $8.2 million, and another N39.6bn. He was accused of using state resources to acquire private properties which included a private radio station, Cosmo 105.5FM.

The former governor was charged by the EFCC in a case titled FHC/L/09C/2007 at the Lagos Federal High Court (FHC). But in 2015, the FHC, Lagos presided over by former Justice Mohammed Yunusa ordered Nnamani to forfeit the multi-billion naira assets he allegedly acquired while in office.

But in February 2018, the FHC Lagos presided by the ruling judge, Chuka Obiozor struck out the case. The case was later revived by the EFCC on the basis that it lacked ‘proper charges’ before the court.

Nnamani later won a senatorial election under the platform of the PDP during the last elections. Last Friday, an FHC in Enugu dismissed a suit filed by Gilbert Nnaji to disqualify Nnamani’s candidacy for the senatorial poll.

Notwithstanding the EFCC case against the former governor is still pending in court based on available data on the official website of the anti-graft agency.

Since 2007, Orji Uzor Kalu, former governor of Abia State has been facing criminal charges filed against him by the EFCC.  His case charges’ number is FHC/ABJ/CR/56/07. The senator-elect representing Abia North Senatorial District also got a mention in the report of the United States Department of Justice.  He is number five on the list of the 10 nationally prominent political figures charged during the administration of Ribadu.

A former chieftain of the Peoples Democratic Party (PDP), and currently chieftain of the APC was accused of stealing N7.6 billion of the state fund through his purported company – Slok Nigeria Limited.

He was first arraigned in 2007 at the Federal High Court, but he has managed to keep the case dragging for more than a decade.

In September 2018, the former governor reportedly absconded to Germany in an attempt to evade prosecution but he later denied the report.

The case is still pending at the Supreme Court in Abuja on the basis that his lawyer is challenging an aspect of the trial.

“Case still pending at the Supreme for the determination of an interlocutory appeal by the defence,” the EFCC stated.  In less than two months, the former governor will join members of the hallowed chamber to make laws for the next four years.

Goje ranks top on the list of ‘high profile matters being prosecuted by the EFCC. He was also featured in Country Reports Human Rights Practices for 2012, put together by the United States Department of States, Bureau of Democracy, Human Right and Labour as one of the most corrupt governors in the country.

He has been on trial since 2011 and has a case instituted against him by the EFCC. It relates to conspiracy and money laundering with a case number FHC/GM/CR/33C/2011.

Goje is accused of stealing  N25 billions belonging to the people of Gombe State when he was a governor.

On 16th December 2014, the case presided over by Justice Babatunde Quadri was stalled because the defence lawyer pleaded for an adjournment citing medical issues.

“I appeal to the EFCC counsel to accept the adjournment because the first accused person has never been absent in court except for today, and he deserves to be respected as the immediate past Governor of the state, and a serving senator,” counsel to the defendant, Adeniyi Akintola (SAN) stated in a report by the EFCC.

“Trial is ongoing. The prosecution is yet to close its case,” the EFCC said.

Incidentally, Goje, who is still under the prosecution list of the EFCC is eyeing the seat of the Senate President. Already, he is getting accolades and supports from senators from the North East region of the country.

Though former governor of Benue State did not make the high profile list of the EFCC, he is considered as one of the prominent corrupt state administrators in the history of the state.

Gabriel Suswam, a two-term governor of Benue state, who was accused of illegally diverting N3 billion of state resources also made it to the 9th Senate. He allegedly stole another N9.7bn money meant for Police Reform Programme and Subsidy Reinvestment Empowerment programme. Suswam contested under the platform of the Peoples Democratic Party (PDP) and won the Benue North East Senatorial Zone. Aside from the N3 billion case, he was also charged in the case number FHC/ABJ/CR/255/ 2016 and FHC/ABJ/CR/256/2016, before Abuja Federal High Court.

Suswam is also mentioned in a separate N23 billion case. He is alleged to have connived with the former Minister of Petroleum Resources, Diezani Alison-Madueke to fraudulent enrich himself.