How claims of Atiku’s employees don’t add up – Did he employ more than Dangote, Shell?

ON Thursday, Mohammed El-Yakub, who is the Managing Director of Gotel Communications, Atiku Abubakar’s Adamawa-based media organisation, said his boss had approved minimum wage for all staff of his companies. He also put the total of these beneficiaries at “over 100,000”.

In Atiku’s defence, Reno Omokri, former aide to ex-President Goodluck Jonathan, said in October that only three of Atiku’s companies, including the AUN, have created up to 50,000 jobs. The All Progressive Congress “is silly to say Atiku must list jobs he created,” he tweeted.  “Their focus should be jobs @MBuhari created.”

While The ICIR could not verify how many persons work under the beverage and finance companies, it can report that the staff strength of AUN is just slightly above 1000.

Responding to a recent enquiry e-mailed to the school on the subject, Daniel Okereke, the university’s Executive Director of Communications and Publications said the staff strength of the school constitutes of 1,082 Nigerians, over 80 foreigners and an additional temporary staff of four.

A good number of companies, reputably larger than those established by the People’s Democratic Party (PDP) presidential candidate, are known to have employee populations which are lesser than 100,000. One of them is the Dangote Group of Companies, a multinational conglomerate owned by Aliko Dangote, Africa’s richest man.

The conglomerate, the largest in West Africa and one of the largest on the continent, comprises Dangote Cement, Dangote Sugar and Dangote Refinery, and is reported to employ only over 30,000 people, as at 2017, generating revenue in excess of  $4.1 billion. Dangote Cement alone has operations in up to 10 African countries.

Another great example is Royal Dutch Shell PLC, a British-Dutch oil and gas company with headquarters in the Netherlands, and the sixth-largest company in the world according to revenues in 2016. The company also has operations in over 70 countries. Nevertheless, as at 2016, Shell employed an average of 92,000 workers, as stated in its 2016 sustainability report.

ExxonMobil, a United States-based multinational oil and gas corporation and the world’s ninth largest company by revenue, also employs far less people than Atiku Abubakar, if the claims of his associates are to be accepted.

As at 2017, the company had only 69,600 employees globally, according to Statista, an online statistics, market research and business intelligence portal. The company’s staff strength declined compared 2001 when it employed 97,900 people. 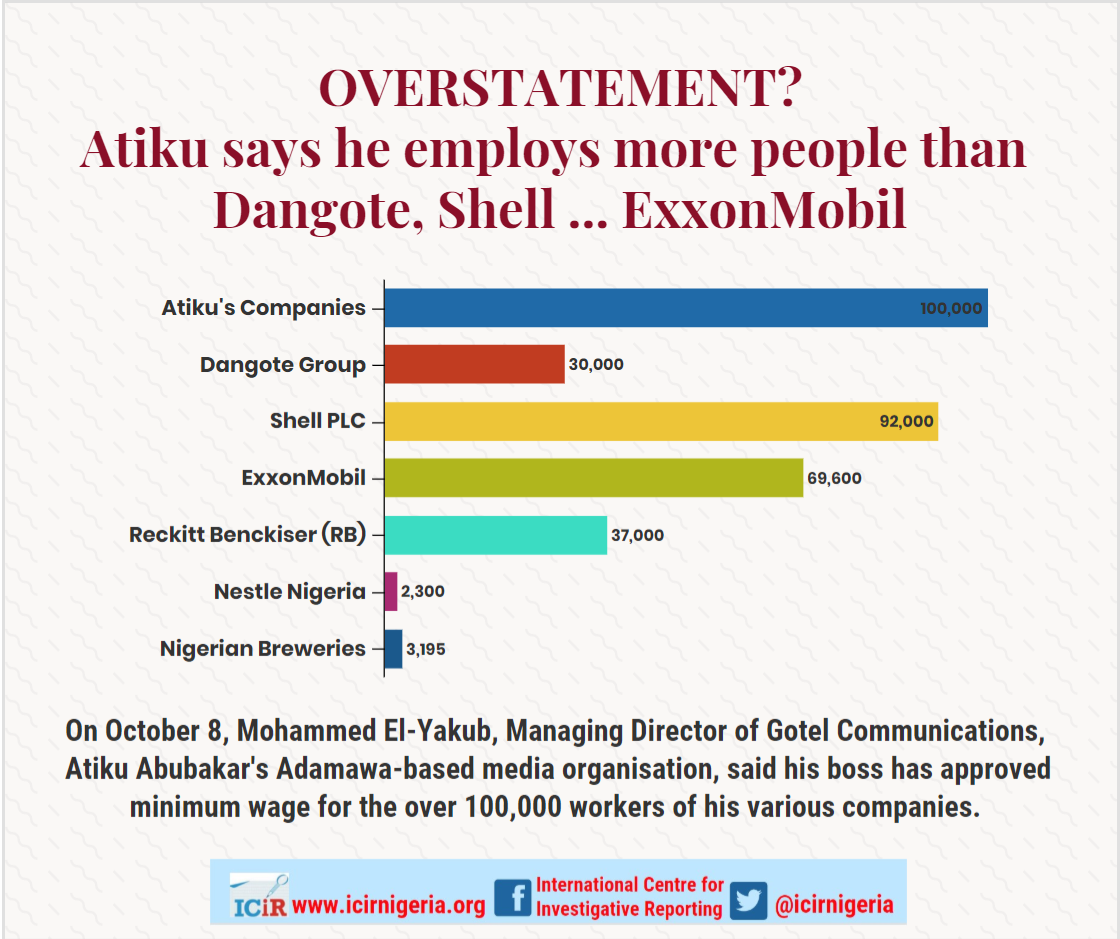 Reckitt Benckiser Group PLC (RB), a British multinational consumer goods company which produces Dettol, Strepsils, Air Wick, Durex among several other products and has operations in 60 countries across the globe, had as at 2017 only 37,000 employees.

Further checks revealed that Shoprite, Africa’s largest food retailer with over 500 outlets has “a current estimate of 130 000 employees”. Nestle Nigeria has a staff strength of just over 2,300 direct employees.

Also, according to the Nigerian Banks Financial Transparency Report of 2010, 14 top banks in Nigeria including First Bank, Zenith Bank and United Bank for Africa (UBA), had a total staff strength of  59,807 as at 2009, leading to a wage bill of N265 billion.

The 2013 annual reports and accounts of Nigerian Breweries PLC, which has several large-scale breweries across the country, put its staff strength at 3,195 — a reduction from the 2012 figure of 3,214.

Interestingly as well, the total number of Nigerians employed by the Lagos State Government only surpassed 100,000 in 2017, when it grew to 100,433 after an additional recruitment of 5,000 persons that year. This was according to Olabowale Ademola, the State Head of Service, who spoke at a ministerial press conference in Ikeja.

Based on the staff strength of leading multinational companies, it is obvious that the claims of Atiku having over 100,000 employees are open to questions. And it is most unlikely that he has such number of staff.

Chat us on WhatsApp
Advertisement
Previous article‘My suspension was nothing but preemptive strike and a coup,’ embattled NHIS boss speaks
Next articleShould Lai Mohammed’s N3.5m revelation have been left off the record?