TEMITOPE Balogun Joshua, popularly known as Prophet T. B. Joshua, is dead, but his impacts reverberate across Africa and the world.

A televangelist, Joshua rose from grass to grace and towered over many of his peers in influence, power and wealth.

Denounced by most of his contemporaries in Nigeria and the two Christian bodies in the country – the Christian Association of Nigeria (CAN) and the Pentecostal Fellowship of Nigeria (PFN) –  Joshua was desired in many nations of the world.

His Synagogue Church of All Nations (SCOAN), located at Ikotun, a suburb of Lagos State, blossomed and attracted the world to Nigeria.

SCOAN became a centre of religious tourism for people across the globe, with many seeking healing and other miracles. Unofficial sources say the church attracts two million guests each year.

The 57-year-old was among the most sought-after preachers in his lifetime, drawing most of his followers and church members from Latin America, Europe and Africa.

He hosted presidents, the rich and the poor worldwide, and made tremendous impacts on sports development. He indiscriminately supported the down-trodden, helped nations in distressand brokered peace across countries.

His birth and death

The late pastor was born on June 12, 1963, at Arigidi, Ondo State. “T.B. Joshua’s journey is a humbling story of how God raised a young man from a poverty-stricken home to lead an international ministry that would attract thousands worldwide to witness the reality of God’s power,” a statement on his church’s website says.

After dropping out of secondary school in his first year, he worked in a poultry farm before starting his ministry with eight members in 1987.

Joshua became a household name in the ‘90s and early part of this century as a televangelist. His ministrations witnessed great miracles.

Peeved by preachers’ competition for miracles on national TVs, the Nigerian government banned miracle services on terrestrial television services in 2004.

Following the ban, Joshua set up the Emmanuel TV as satellite television – an initiative that launched him into global fame.

His ministry grew by leaps and bounds as his prosperity soared.

The late pastor visited Tanzania and mediated in the nation’s political impasse shortly after the country’s presidential poll in 2015.

Late President John Magufuli, who won the 2015 presidential election on his Chama Cha Mapinduzi party, was a close friend of Joshua.

Magufuli had confessed that the Nigerian pastor influenced him to contest for his country’s highest office.

He had visited and worshipped at Joshua’s church in Lagos in 2011.

Magufuli’s rival Edward Lowassa, who flew his Chadema’s party against Magufuli, was at SCOAN in 2012.

Similarly, Tanzania’s current Minister of Finance Mwigulu Nchemba visited Joshua’s church in December 2014 when he was a deputy minister of finance.

While in Tanzania during the stalemate, Joshua encouraged Lowassa to support Magufuli’s government and re-contest in the future election on CCM’s platform.

The late pastor also met the outgoing President Jakaya Kikwete and prominent leaders in the country.

Lowassa was back at the CCM in 2019, and Magufuli had another rival when he sought re-election for a second term –  Tundu Lissu of the opposition party.

Lissu managed to secure only 13 per cent of the votes.

Another striking link between Joshua and Tanzania is that one of his daughters, Serah, married a Tanzanian Brian Moshi in May this year.
The wedding took place at a Catholic Church located at Unga Ltd in Arusha, and the couple tied the knot at SCOAN before proceeding to Dubai, the United Arab Emirates (UAE).

T.B. Joshua had an enduring relationship with the former Ghanian President Atta Mills.

The late president visited the Synagogue Church on January 10, 2009 to testify to how Joshua’s prophecy brought him to power.

Mills was reportedly coming to meet Joshua in his Lagos church before he suddenly died.

Mills contested for his country’s presidency on the platform of the National Democratic Congress and won 50.23 per cent of the vote, against 49.77 per cent for his rival Nana Akufo-Addo, who sought the office through the New Patriotic Party.

Ghanaians went to the polls on December 7, 2008, but the election provided no winner.

Following a runoff on December 28, Atta Mills was declared winner.

A lecturer at the  Department of Sociology, University of Ghana, Michael Kweku wrote in his article titled, “Scrambling for the Centre: Ghana’s New Churches as an Alternative Ideology and Power,” and published by MDPI, a Switzerland-based platform for promoting science, that Joshua was among the pastors who have great influence on Ghanaian politics.

“The media in Ghana reels with anecdotes on President Atta Mills’ relationship with T.B. Joshua, who is said to have been the personal pastor–physician of the President and had unrestrained access to the seat of government, Christianborg Castle, whenever he wished. President Atta Mills is claimed to have testified that T. B. Joshua prophesied his ascent to the presidency (The PM News, Nigeria 2009). The President is also said to have paid several visits to the prophet’s church in Lagos, in search for a cure to his ailment.

“ In short, his relationship with T.B. Joshua generated a lot of media discussion in the Ghanaian public sphere, meeting with consternation in large segments of Ghanaian society. His critics felt that the President should have concentrated on exhibiting strong leadership and fixing the problems of the nation rather than trotting to pastors. Despite Ghana’s characteristically huge religious public, the ambivalence of President Atta Mills’ public display of religiosity and acquiescing to pastors met with disquiet. Indeed, public reaction to such attitudes is becoming increasingly so, especially when pastors pontificate on aspects of life which experts question.”

In Malawi, Joshua is believed to have influenced the emergence of former president Joyce Banda after he predicted the death of President Bingu wa Mutharika.

Mutharika led Malawi between May 2004 and April 2012 when he died of cardiac arrest.

His deputy Joyce Banda was sworn in his place on April 8.

Banda was a member of Joshua’s church..

Mutharika picked Banda as running mate in the 2009 presidential election, which he won.

Banda had been the minister of foreign affairs during Mutharika’s first term from 2006 to 2009 and the vice-president of Malawi from May 2009 to April 2012.

The impact of T.B Joshua was so much in the country that the nation included the probe of his prophecy in the cause of late Mutharika’s death.

Johnson came third at the poll and should have faced Weah and Vice President Joseph Boakai, who came second.

Pastor Joshua played a key role in uniting the Weah and John to face Boakai, who would be the only major opposition at the poll.

Sierra Leoneans were shocked to see Weah and Johnson at Joshua’s church in Lagos days before the election.

Weah, a senator, went on to win the election on December 28, 2017, taking over from Ellen Sirleaf, Nobel Laureate winner.

Joshua received a rousing welcome in South Sudan when he visited the troubled country in November 2019.

South Sudan gained independence from Sudan on July 9 2011, following a 2005 agreement that ended war in the region. 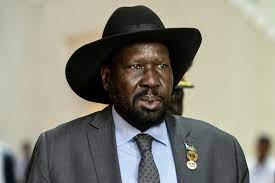 Joshua expressed shock that the situation in the country was so bad that no insurance company was ready to cover flights going into South Sudan, a development he said would affect investments.

“And this is a country endowed with enormous natural resources. How many investors or tourists would want to go through this?,” he said.

He said he was not in the country to preach but to deliver God’s message of peace and a new beginning to the people.

He led the country in rounds of prayers and prophesied peace to their land.

South Sudan eventually got a unity government in February 2020, ending the country’s political stalemate.  However, the country has faced numerous challenges thereafter.

The US 2016 presidential election

T. B. Joshua had, in 2016, predicted that the wife of former president and Democratic candidate Hillary Clinton would win the 2016 US presidential election.  But the prophecy did not come to pass.

“Ten days ago, I saw the new President of America with a narrow win.

“By the way, in order not to keep you in suspense, what I frankly saw is a woman,” Joshua had said on his church’s Facebook page.

But Clinton’s rival and Democratic candidate Donald Trump won the election. Joshua said it would take supernatural understanding to comprehend his message.

He went on to delete the prophecy.

Collapsed building and bribery of journalists

On September 12 2014, a guest house at T.B. Joshua’s synagogue collapsed, killing 115 persons, 84 of whom were South Africans. The incident attracted global attention. South Africans were peeved at Joshua and wondered why justice was being delayed. Lagos State government led by Babatunde Fashola accused Joshua and his church of not getting the necessary permit before constructing the guest house. The case is still at Lagos High Court.

T.B. Joshua and his church linked the collapse to a small plane circling over the church guesthouse, but many saw that as a cock and bull story.  Days after, Nicholas Ibekwe of Premium Times released an audio alleging that T.B. Joshua bribed journalists to write stories in his favour and to twist the truth.

There were also several allegations against Joshua while alive.  A lady accused Joshua of rape.

One Head Pastor of Awakeners Chapel International Peter Kayode Falarungbon accused him of taking his wife.  Joshua’s church often linked his prophecy to most of the world’s events -whether true or otherwise.

Chat us on WhatsApp
Advertisement
Previous articleIgbo people want a constitution that will work for them -Uzodimma
Next articleAt least three dead, 13 injured in Lagos tanker explosion