Hundreds of doctors throng Sheraton Hotel for Saudi interview, but only seven are needed 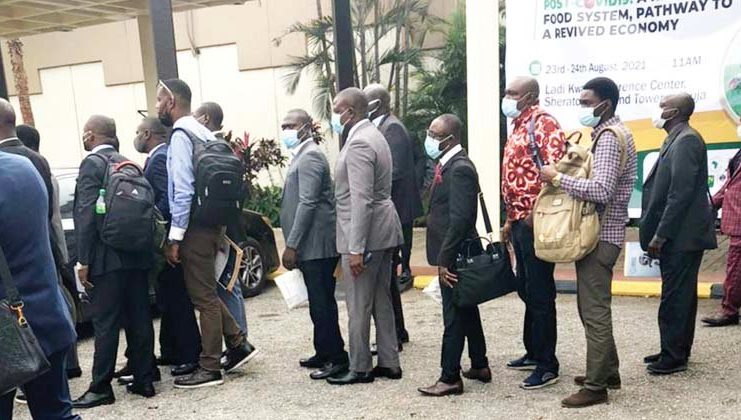 HUNDREDS of doctors thronged Sheraton Hotel Abuja on Tuesday and Wednesday for a recruitment exercise that would enable them to jet out of Nigeria and work in Saudi Arabia, but only seven are needed, The ICIR understands.

An official familiar with the exercise said recruiters wanted only seven doctors and the recruitment had been a recurring event at the hotel.

The official, who pleaded anonymity because he did not want to be sanctioned by his organisation, said what made the just-concluded exercise unique was the National Association of Resident Doctors (NARD) strike.

“The interview was for only seven persons. This is not the first time the man has been doing it, sometimes for 10 or 20, which is the maximum number I have seen.

“This week, he thought it was going to be the usual way. Doctors are on strike. The Minister (of Health) and his labour counterpart are not helping issues. That’s what triggered the whole issue,” the official said.

The programme sought practitioners from different specialities, and it is expected to provide better working conditions and remunerations for beneficiaries.

Our reporter saw about 20 doctors at the hotel on Thursday who hoped the exercise would continue, but it did not.

Some of them who spoke with our reporter expressed sadness over the discontinuation of the exercise.

They claimed they had been there a day earlier and could not receive recruiters’ attention.

Efforts by our reporter to confirm the figure from the recruiting agency failed on Thursday.
The phone number on the firm’s website was unavailable.
The reporter also sent a message to the organisation through its website, but it was not replied at the time of filing the report.

NARD members, comprising resident doctors and house officers, constitute most doctors who work in public hospitals in Nigeria. They have scaled down services since August 2 following unmet demands from the federal and state governments.

Why we are leaving Nigeria – Doctors

Some doctors who spoke with our reporter at the recruitment venue said they were leaving the country because of insecurity and a poor working environment.

Some of the doctors claimed they worked in public health facilities and were fed up with the nation’s economic situation and poor state of health.

“Insecurity is much. Look at the killing that is happening in Jos. People are stockpiling ammunition. Do you think I will see those things and will stay in this country? The value of what I earned five years ago was much more than what I’m earning now. I want to go to a place where what I earn can take care of me.”

According to him, a consultant doctor trains for 15 years, spends seven years in school and spends another seven or eight years before becoming a consultant.

He said though doctors spent many years to garner experience, the government punished them whenever they agitated for better welfare and a conducive working environment.

He added that hospitals in Saudi Arabia and other advanced countries where Nigerian doctors sought pasture were clean like hotels. In contrast, Nigerian hospitals oozed foul odour and were not conducive for work, he further said.

Meanwhile, NARD President Okhuaihesuyi Uyilawa told our reporter that any doctor wishing to leave the country should not hesitate to do so.

Speaking with our reporter on Thursday, Uyilawa said, “Anybody has the right to do what is good for them. When you’re not taking care of them, what do you want them to do?”

Asked what the consequences of such an action could be on the country, he said, “Who wants to stay here and suffer? The government said they had enough and could always import doctors. The Minister of Health had said they would import doctors to come and be working for us even when they can’t pay the ones they have.”

Data on doctors working in Nigeria to the nation’s population

Nigeria had a doctor-patient ratio of 1:2,753 in 2020, according to the Federal Government.

The World Health Organization’s minimum recommended ratio is one doctor to between 400 and 600 patients.

The effort by our reporter to obtain the number of licensed doctors currently working in the country was unsuccessful as the Medical and Dental Council of Nigeria did not have the data on its website.

But former Minister of Health Isaac Adewole had said in 2018 that MDCN had 88,692 doctors registered in its books as at May that year.

An estimated 38,000 Nigerian-trained doctors are practising in the UK alone.

The WHO notes that countries with the lowest relative need have the highest number of health workers, while those with the highest disease burden make do with a much smaller health workforce.

Nigeria parades most of the disease burdens, highest maternal and child mortalities globally.

The ICIR had reported how the Nigerian government, through the Minister of Labour and Employment Chris Ngige threatened to sack the striking doctors.

Despite a court order secured by the government to force the doctors to return to work, NARD said its strike would continue.

Chat us on WhatsApp
Advertisement
Previous articleNBC queries Channels TV, says interview with Ortom on grazing reserves contains unfair comments
Next articleMedia franchise, Politico, to be sold for over $1 billion