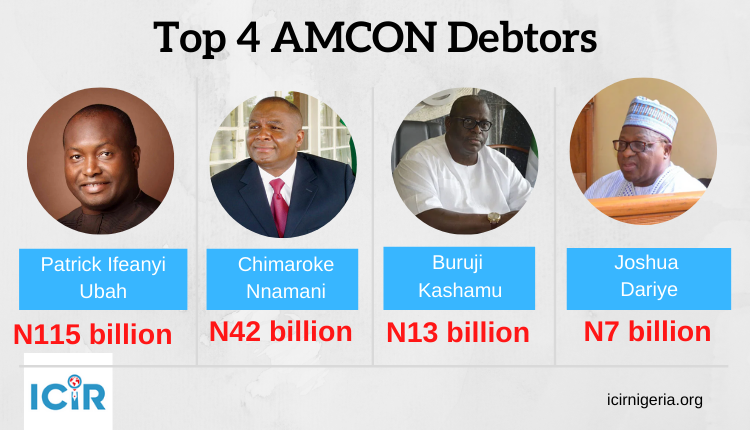 THE Asset Management Corporation of Nigeria (AMCON) in its debtors’ list has recorded four Nigerian politicians as its top debtors. Among them were two former governors, a serving senator, and a former senator.

In total, these politicians including the Cross River State government owe over N214 billion, a debt which was acquired and settled by AMCON, by virtue of its operational law.

Over the years, AMCON has taken over non-performing loans (NPL) of businesses and individuals from banks. According to reports, the corporation has settled over N5 trillion debt using taxpayers’ money.

The 2010 AMCON Act empowers the corporation to inherit bad loans from banks, manage assets, which become available for disposal during the course of NPL resolution.

The assets are largely a result of non-cash settlements by obligors and in some cases are due to foreclosures on NPLs.

According to Muiz Banire, Chairman of AMCON, about 350 individuals are responsible for 80 per cent of the huge debt.

Using money recovered by AMCON in place of external loans

Given the current external loans sought by the Federal Government, it is essential that AMCON explores every legitimate means to enforce the recovery of the debt, as it is taxpayers’ money. The federal government had argued that those loans are meant to develop infrastructural facilities in the country.

The N5 trillion settled by AMCON cannot, by any stretch of the imagination, be described as a small amount of money. It is over 47 per cent of Nigeria’s national budget of N10.59 trillion for the current fiscal year.

With such amount, the country could reverse the trend of Nigerians traveling abroad for medical tourism by investing in decaying Nigeria’s healthcare facilities or address poor funding of education in the country. It could also help rehabilitate some of the decrepit infrastructures in the country.