INVESTIGATION; How online fraudsters feed on greed, naivety of victims in Nigeria

As Nigeria transits into a cashless society, the evolution also creates opportunities for internet fraudsters to take advantage of unsuspecting citizens. Abdulrasheed HAMMAD reports about how Nigerians are getting fleeced of their hard-earned money by internet crooks.

A victim of online fraud, Eziri Tina, an indigene of Delta state, narrated how she met one Orave Olufu, a member of a scam syndicate on Facebook. Orave describes herself as a cloth seller on Facebook and Tina asked to be introduced to her supplier. She was later introduced to Efe Mercy Morrison, the alleged fraudster who lies to her victims on Facebook that she imports clothes from China.

After a long negotiation, Morrison showed her victims the pictures of the goods that would be supplied to her and requested payment in the sum of N57, 500. Immediately, Tina transferred the money into a Keystone Bank account – 6030589177 bearing the name: Efe Mercy. A few minutes later she was blocked.

When she reported the scam to Keystone bank, they asked for the account details of the swindler. She also reported the fraud to her bank and the staff who attended to her promised they would do their best to recover her money.

This happened on 21 July and as of the time of filing this report, Tina is yet to recover her money.

Busola Saa’dudeen is another victim of an online scam. She narrated how her friend on Facebook, Olaitan Adebesin introduced an investment program to her.

According to Saa’dudeen, she was constantly persuaded by her friend to invest and receive double the amounts invested within two days.

“Two days after I sent the sum of N10,000 to them, which is the day I was supposed to be credited the double amount as promised. I talked to the person and she told me they have a problem with their network. Not long after that, they stopped responding to all my messages,” she lamented. The Trucllaer showed her name as Victoria Investment.

It was later she discovered that her friend’s Facebook account had been hacked. When asked why she didn’t inform the police, she told The ICIR that her friend informed her that the police would not do anything to it, rather they would fleece her.

The stories of Tina and Saa’dudeen illustrate the travail of victims of online scam in Nigeria, and the frustration they experience in the quest to seek redress.

Online scam in Nigeria is now  rampant as more youths engage in swindling others as a means of survival.

The Federal Bureau of Investigation (FBI) in the US recently indicted 80 suspects, 77 of them Nigerians – in what it describes as the “largest case of online fraud in US history.”

Also, last year, Nigeria’s Economic and Financial Crimes Commission (EFCC) along with the Federal Bureau of Investigations (FBI) arrested 281 individuals for cyber-enabled financial fraud, among who 167 were Nigerians.

Another victim, Oladipupo Success narrated how her friend’s WhatsApp number was hacked and used to defraud her. They are in the same WhatsApp group for Christian fellowship. The victim, a 200-Level student of Anatomy at the University of Ilorin, didn’t know her friend physically, but she knows she is a member of her church.

According to her, the WhatsApp contact of a friend named Blessing was hacked and they used the contact to send an advertisement on Helping Hand Investment and after she joined their WhatsApp group, she received their call instantly.

The victim sent a sum of N5,000 four different times to Ijaleye Seun’s account number: 2144066629/UBA. But she didn’t approach the bank because she is ashamed to let other people know that she was duped.

Shehu Majindadi Al-Korowy also recalled how his elder brother’s Facebook account was hacked without his knowledge. He was asked to pay into JAMALIFE INVESTMENT ACCOUNT bearing the following details Nwaogu Ifeanyichukwu/4893001493/Eco Bank. The WhatsApp contact used is 07026836144 registered in Williams Davidson’s name.

He lodged a complaint at Kwara state police headquarters on the 7th June 2020, and the police promised to recover his money back upon the payment of N6,000.

He later contacted the swindler through another phone number, negotiating another deal, and they sent two different account details. The first belongs to Daniel Agbeaku: 3153720098, Access Bank while the second belongs to Muhammad Hawa: 3153720098, First Bank.

As at the time of filing this report, the police have not recovered the money.

Sofiullahi Balogun, also recollected how his WhatsApp account was hacked by scammers and his identity used to defraud one of his friends of N20,000.

He wrote a formal complaint to the Economic Financial Crime Commission (EFCC), and the police, but they are yet to apprehend the scammer.

The petition, which was written on the 12th of November accused Olele Kingsly the owner of the First Bank account (3143821125) into which the alleged sum was paid.

In a related development, Aminat Lawal also narrated her experience to The ICIR  about how a suspected internet fraud hacked one of his brother’s Facebook accounts and used it to dupe a victim.

A Personal Experience with Scammers

To get a first-hand experience, the reporter decided to create a new Facebook account with the name Rasak Arigbabuwo, and changed Whatsapp name to reflect the same identity.

The reporter’s first observation is that almost everyone on his new friend list uses hacked Facebook accounts. And once they succeed they proceed to use the phone  lines for their fraud activities. Some of them parade as CEOs of investment clubs,  claiming to pay double the amount invested within an hour.

Others pretend as herbalists while some parade as millionaires interested in doing online giveaways. But the goal is the same: To defraud their quarry.

One of the scammers introduced Good Life investment to the reporter through WhatsApp group. Later, one Eniola asked the reporter to send his bank detail, phone number, the amount to be invested, and mode of payment.

He told the reporter that she has registered the details sent to her and the reporter should go and make payment to GTB account number 0114278244 belonging to Apuede Eunice, though she introduced herself as Eniola. 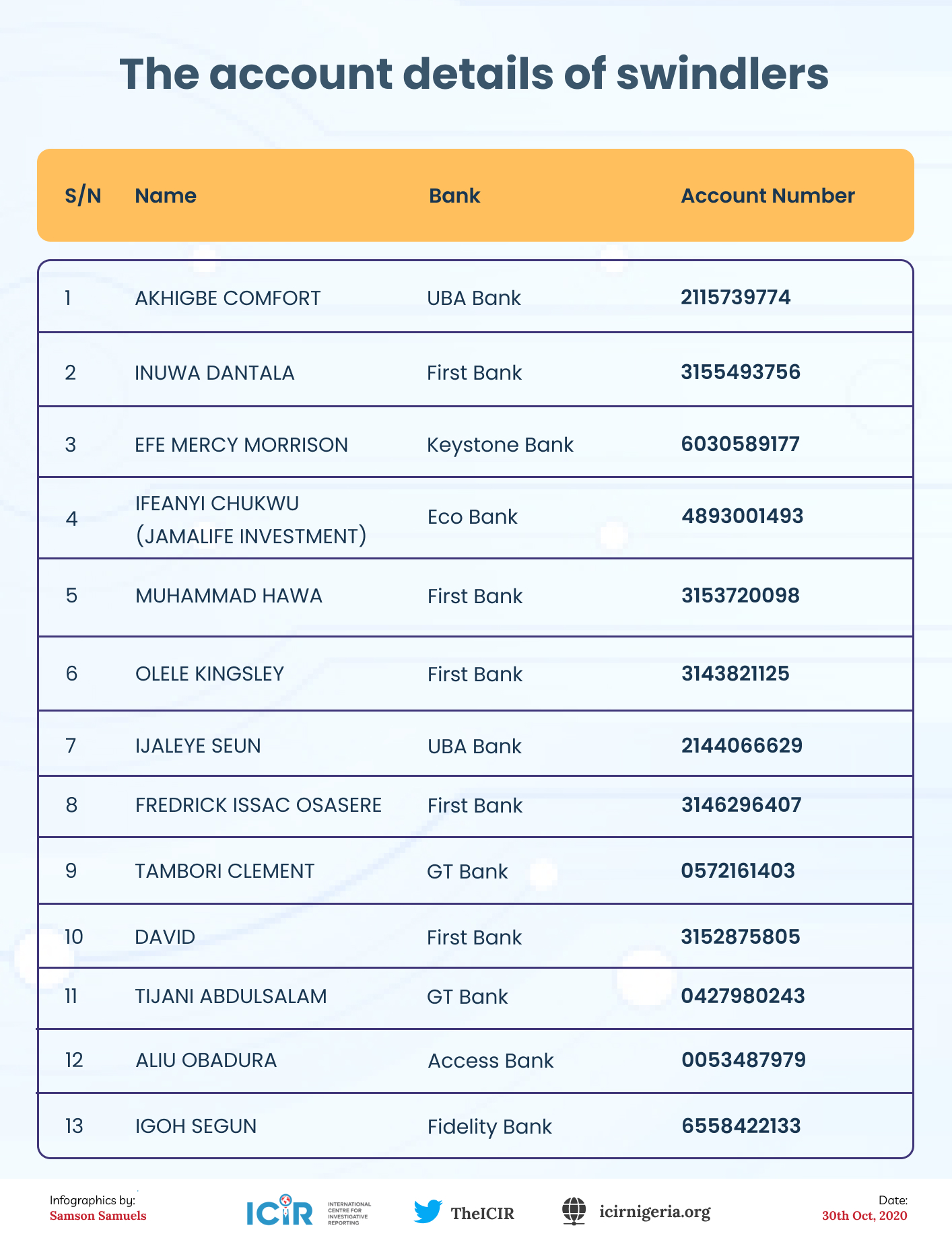 However, when asked her what is the assurance that she would not block the reporter after making the payment, she did not reply, rather she urged the reporter to promptly deposit the money into the account.

During the course of this investigation, one woman chatted with the reporter privately, introducing Binomo Investment Trade. She promised that the reporter would never regret investing money and sent the account detail of the purported Binomo Manager— Mr. Fredrick Issac Osasere/3146296407/ First Bank.

The reporter conversed with another swindler on Facebook, telling him about his interest in online investment, he called immediately even before the reporter gave him his phone number. He gave a GTB account number—0572161403 belonging to Tambori Clement.

After collecting details for the registration, he implored the reporter to make the payment to this account detail:John Oisamaye David/3152875805/First Bank so that he would get double the amount.

While speaking with Abdulgafar Taoheed, an expert in White Hat Hacker, he revealed that the act of receiving fake alert is called ‘revoked’ and it’s very easy for these scammers to use the application to convince people that the investment is real.

He admonished Facebook users to change their passwords at a 3-month interval. This will help in securing their accounts from time to time.

He also advised social media users to do the two steps verification code in their social media account to protect it from being hacked.

Section 5-16 under part III of CYBERCRIMES (PROHIBITION, PREVENTION ACT, 2015, provided the punishment for the perpetrators of online scams.

Section 6(1) states that: “Any person, who without authorization, intentionally accesses in whole or in part, a computer system or network for fraudulent purposes and obtain data that are vital to national security, commits an offense and shall be liable on conviction to imprisonment for a term of not more than 5 years or to a fine of not more than  N5,000,000.00 or to both fine and imprisonment.”

All efforts to reach the Police PRO, Frank MBA, and his deputy, Adeniran Aremu, proved abortive as several messages on Whatsapp and calls were ignored.

But in an interview with the Public Relations Officer of Kwara state, DSP Okasannmi Ajayi explained to The ICIR that the first step the police force is taking to curb the menace of online scam is by sensitising the people about the dangers involved.

“We will sensitise people to be conscious of the links they click and the kind of text messages they react to and should also be enlightened to be very cautious of information they post out on social media either on their private or public spaces.

“Secondly, any complaint of any cybercrime that we receive, we will make an effort to investigate it. The one that has to do with the bank, we will get the account details and we will investigate the BVN of such a scammer and we will notify the bank to inform the police anytime these scammers are making any attempt to withdraw the money at the bank, they will be arrested, ” he disclosed.

He warned that people should be cautious online when dealing with unknown people. The Police work with banks to unravel these crimes and the cooperation has been good.

When the reporter inquired about why people are usually reluctant to report an online scam to the police, he replied that they have their own reason for not coming and if they decided not to come and complain that they have been swindled, there is nothing the police can do about it. He also pointed out that the police are willing and available to investigate any case reported to them.

“As far as we are concerned, the police are ready to investigate any case reported, if they don’t report to us, there is nothing we can do about it, ” he said.

He, however, admonished the people to mind the information they post on social media about their financial status and should also be careful while receiving any bank messages.

He insisted that the police do not ask for money from anybody before receiving a complaint or carry out an investigation on cybercrime, a claim contrary to Shehu Majindadi Al-Korowy’s allegation who paid N6,000 to a police officer when lodging his complaint at police headquarters in Ilorin.

While speaking with one of the officials of Union Bank, Ilorin Branch (Name Withheld), he clarified that victims of online scams could always get their money back if the money is passed through account details.

“Even if they transfer the money from the account, their account is not closed and it’s possible to track those scammers through their BVN. His BVN can also be blacklisted.”

One of the staff at First Bank, Ilorin Branch (Name Withheld), said it is advisable for victims of the online scams to report at their bank. The bank can help in investigating the matter in order to refund the money to the victim.