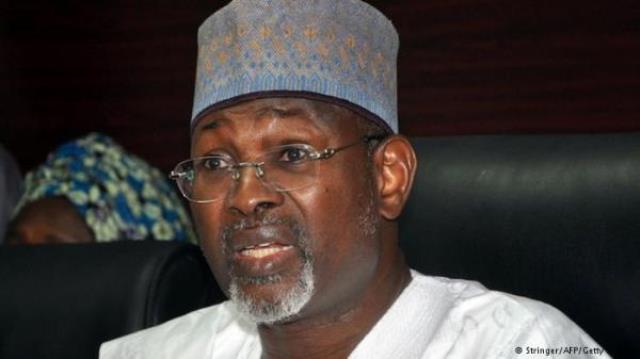 The chairman of the Independent National Electoral Commission, Attahiru Jega, has dismissed reports that the Peoples Democratic Party, PDP, has won the presidential election in 23 states in the country.

Fielding questions from journalists at the national election collation centre in Abuja, on Sunday evening, Jega said that collation was still going on in the states and that only two states had announced the results of the presidential polls.

He warned Nigerians to be careful with results being released, particularly on social media and persons with obvious vested interests in the results.

The INEC chairman was reacting to a question regarding results being released on social media and an alleged announcement by the spokesman of the Goodluck Jonathan campaign Organisation, Femi Fani – Kayode, that the PDP had won the presidential polls in 23 states.

Jega, who was speaking for the first time after the conclusion of the polls, said that the he had received reports of malpractices and electoral fraud in some state but assured that INEC was investigating the allegations and that any official of the commission found culpable in any fraudulent acts would be sanctioned.

He said that the allegations received by the commission include the disappearance of electoral officials with results sheets and other staff of the electoral body deliberately delaying the distribution of electoral materials.

On the allegation of substitution of INEC ad hoc staff by untrained persons in some states, he said that although the commission had received many such complaints, nobody had come forward with specific information about the polling units or wards and the number of people involved.

He however wondered if there is a link between the high incidence of card reader failure and the allegation that INEC staff were substituted and that the machines did not work because the people who handled them were not the ones trained to do so.

The INEC chairman also confirmed that the commission had received a petition from the All Progressive Congress, APC, in Rivers State, alleging a lot of fraud in the electoral process and demanding a cancellation of the polls in the state.

Jega said that the allegations by the APC were being investigated and appropriate action would be taken when the process is concluded.

He also stated that the electoral body had received reports that its office in Rivers State had been set ablaze and that the matter was being investigated.

He said that the commission had already reported the matter to the police and that it had also requested for additional security to be provided in all INEC offices across the country.

Jega confirmed the killing of two ad hoc staff of the commission in Yobe State during attacks by gunmen suspected to be Boko Haram insurgents.

He also addressed the allegations of under aged voting, particularly in a particular section of the country, stating that the commission had received only one complaint from Taraba State.

Jega said that the Resident Electoral Commissioner, REC, in the state had been mandated to investigate the allegation, identify the polling unit, the officials that allowed under aged voting, as well as the polling units where it occurred.

He insisted that registration and voting by under aged persons is illegal, but observed that INEC had received only one official complain even though the social media was agog with accusations of under aged persons voting in the election.

The INEC chairman also frowned at the summoning of electoral officials, particularly the Resident Electoral Officers, by state governors, insisting that the commission is an independent body that is not answerable to the governors.

He said that it was unacceptable for a governor to summon INEC officials for any reason, particularly at a time when the commission was conducting an election and that such occurrences would be investigated