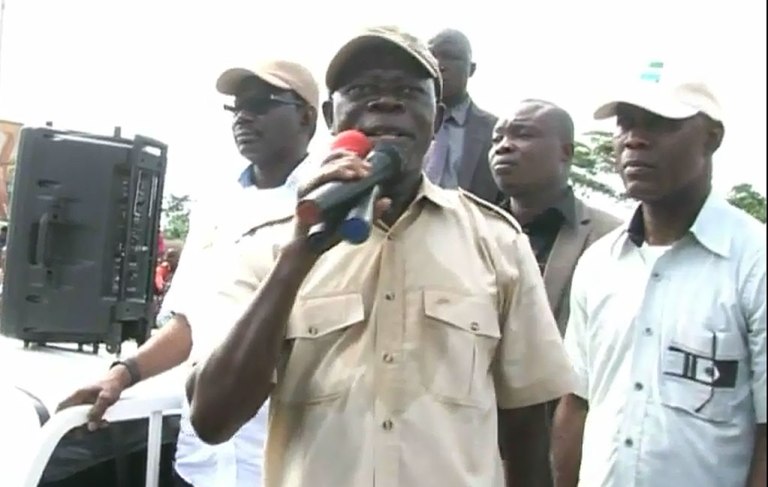 The Edo State governor, Adams Oshiomhole, has said that the transformation agenda of President Goodluck Jonathan has failed to make any meaningful impact on the nation and the people.

The governor, who addressed Benin residents on Monday after a road walk tagged “March for Buhari” which started from Oba Ovoranwen square, the city centre and culminated in a mass rally in the New Benin area of the state capital, berated the President for an alleged lack-lustre performance and went further to assert that rather than better the country, the Jonathan – led government’s transformation agenda had deformed the country instead.

According to Oshiomole, Nigerians will have the opportunity on Saturday to vote out the government which he said had abused their trust and failed them in the past 16 years.

“I have seen the huge gap between the promise and the reality. Nigeria today is 16 years into democracy. Governments have come and made promises, they have abused the trust of our people.

“On Saturday, Nigerians are being called upon, there will be a referendum- a referendum of every Nigerian from the age of 18 and above who is equipped with his PVC will have to make a decision that will define the future of our great nation and indeed the future of the black race,” he said.

The Edo State governor wondered what kind of transformation the PDP was presenting as its achievement, while also debating the issue of continuity versus change.

“For those that say they want continuity, what is it we want to continue with? Sixteen years into democracy, Africa’s most populous nation, most naturally endowed nation under one party for 16 years even the poor are using generator, the rich are using generator, even the villa is using generator. For 16 years, PDP failed to deliver on one of the most fundamental issues in the Nigerian economy, the issue of power supply.

“Without power supply, nothing will work; the local woman cannot grind her cassava except there is a generator to power the grinding machine, the local businessman who tries to start a small scale business needs a generator to run his business. Who wants us to continue in the dark? Are they saying we should continue living in darkness?” the governor asked.

He went further to question the rationale behind paying for power even when it is not supplied.

“NEPA does not give you light for months and yet they ask you – a democratic country, a free country to pay fixed charges even when they deliver fixed darkness. Who says we should continue with this condition?” he asked.

Oshiomole also lamented the prevalent corruption and mismanagement in the petroleum sector, stating that it had robbed rather than enrich the Nigerian people.

“Today, Nigeria is importing petroleum products. As we import these products, NNPC tells us that they are subsidizing your kerosene for N50. They ship about $30 million taxpayer’s money, they give it to themselves at $10 million and they pocket $20 million and share it among themselves. Today a litre of kerosene is sold for N150 yet NNPC says they are subsidizing it to be sold at N50.

“Where is the transformation? They have transformed refineries that were working when General Buhari was the Minister of Petroleum to refineries that are not working. This issue is about common sense. When the Warri refinery was working, many of our people were working there, earning good salaries, adding value. When General Buhari was head of State, all our refineries were working. He refused to take the IMF Loan. N1 was equivalent to $1 but today, $1 is N230,” Oshiomole said.

Stating also that the PDP- led government was to blame for the spate of crime and the wide-spread unemployment across the country, the governor claimed that there was no single reported case of kidnapping in Nigeria before PDP took over power in Nigeria.

He asserted that the APC was determined to change the state of affairs in the country through responsible leadership.

“Fixed charges will be abolished in APC government. General Buhari will not allow any body to be made to pay when power is not delivered. No light, no pay,” he stated.

Addressing the issue of religion, corruption and justice, Oshiomole wondered why it was usually when issues of prosecution come up that the accused persons remember tribal or religious alliances.

“When people have done bad things and you ask them to account, they resort to ethnicity and religion. I ask you to find courage to interrogate all those miscreants who are preaching message of hate, who wants to pitch Christians against Muslims,’ he stated.

Oshiomole, who defended the Buhari’s reputation as an incorruptible leader, further stated that the APC presidential candidate was a person of integrity who only ensured that justice was served while he was Head of State.

“It is true he sent some people to jail but did he jail innocent people? He jailed corrupt people and he will jail corrupt people again. There is no running away from it. That is why they are afraid, that is the message,” the governor said.