A NON-PROFIT research and advocacy group, the Centre for Democracy and Development, CDD, has said it recorded the killings of at least 10 people and over 129 cases of electoral malpractice during the governorship elections in Kogi and Bayelsa States last Saturday.

In a press conference held on Monday, the group urged President Muhammadu Buhari-led administration to “redeem the sanctity of the ballot”.

“On November 16 in Kogi and Bayelsa States, the very foundation of our 20-year-old democratic order came under a grievous assault. Enthusiastic citizens trooped out to vote for candidates of their choice, but they were absolutely disappointed,” Idayat Hassan, CDD’s director, told journalists.

“Many voters were disenfranchised as a result of a constant threat to life and limb throughout the process.”

Election Analysis Centre, the situation room operated by CDD for the purpose of monitoring elections in Kogi and Bayelsa, received field data from various observers.

In Kogi alone, it deployed over 300 observers to areas with a higher number of registered voters and where irregularities were expected, Idayat told The ICIR.

“The sheer magnitude of the violent assault on the sanctity of the ballot was shocking beyond description. The outcome of such a process that was so criminally subverted should not actually be allowed to stand. At the last count, our observers report from Kogi State have recorded the death of 10 people in various shooting incidents and attacks across the state,” she said.

Over 79 incidents of malpractice were recorded in Kogi, ranging from hijack of electoral materials to kidnap of ad-hoc staff of the Independent National Electoral Commission (INEC), vote-buying, attack on observers and journalists, and so on.

On the other hand, violence (manifesting as thuggery, ballot box snatching and destruction of voting materials) constituted 66.7 per cent of the cases reported in Bayelsa, vote trading constituted 22.2 per cent, and underage voting constituted 11.1 per cent.

“On the whole, what we saw on the field defies reasonable logic, especially coming after the 2019 general elections, feeling that we as stakeholders would have learnt key lessons, experiences that would actually improve the quality of the electoral process,” Idayat said. “The conduct of the Kogi and Bayelsa polls is indicative of an electoral process that is fast deteriorating.”

She said figures of the voters’ turnout declared by the electoral commission for some local government areas are suspicious when compared with figures from previous elections from 1999. For example, in Okene, as many as 87 per cent (114,001) of the total registered voters were accredited, “an incredible increase of around 69.1 per cent” compared to 2015 figures. 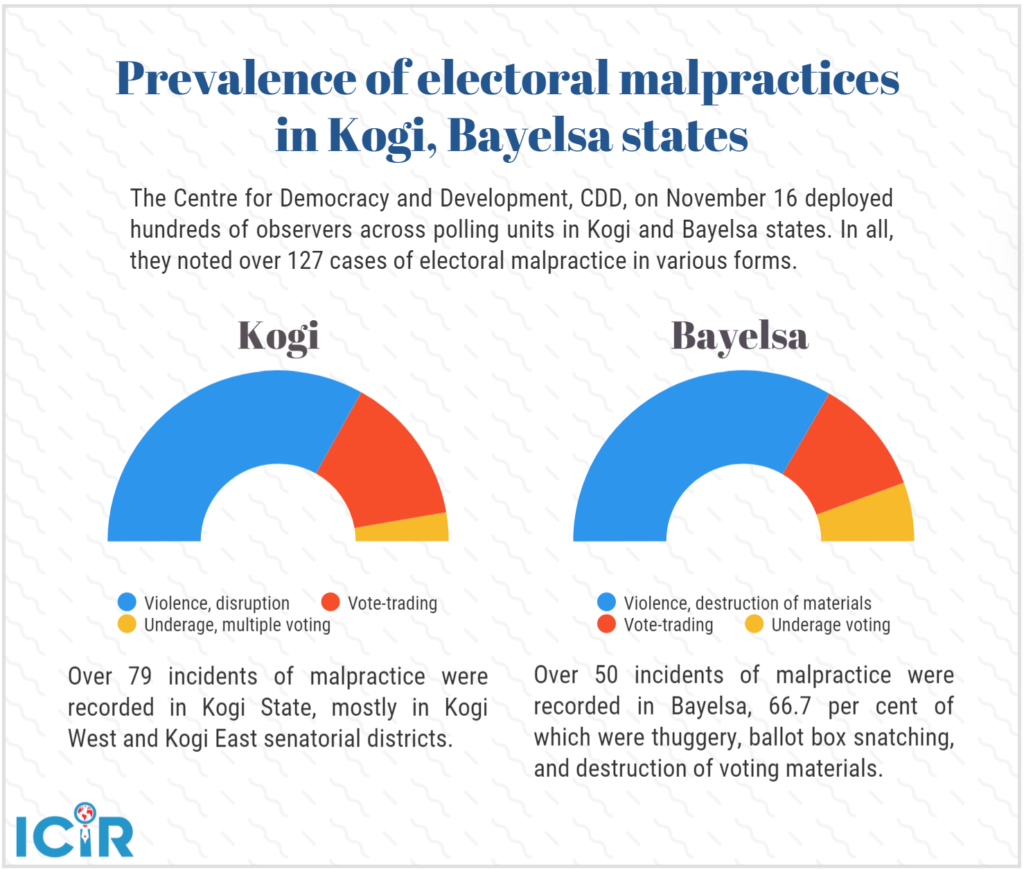 “We dare not choose the convenient path of silence,” Idayat urged.

“As a generation of Nigerians, history will reserve very harsh judgement for us if we stand by and do nothing as citizens are being increasingly stripped of their fundamental right to decide who govern them. It has become so bad that parallels are being drawn between the elections being conducted now and the infamous elections of 2003 and 2007. We cannot afford to return to the lowest points in our electoral experience.

“CDD calls on President Muhammadu Buhari to urgently provide the leadership needed to rescue the electoral process and by extension the entire democratic system from imminent collapse. This call becomes imperative because Buhari was only able to ascend the presidency through the historic 2015 elections because the electoral process allowed the votes to count. That watershed was a culmination of the electoral reform initiated by late president Umar-Musa Yar’adua and former president Goodluck Jonathan.

“At the moment, Nigeria’s electoral process requires similarly bold and courageous leadership to chart a way forward and resolve the lingering challenges threatening to derail it. President Buhari owes this duty to all Nigerians. He cannot stand by and allow the continuous degeneration of our electoral system.”

Hassan said CDD’s monitors observed over 20 pieces of misinformation in relation to elections in Kogi that were “capable of further inflaming the already volatile state”.

“I think it’s high time both INEC, the Nigerian state, and other stakeholders took very seriously the impact of disinformation in elections. This weaponisation of information was really pervasive in the elections,” she said.

According to her: “In some places, they actually turned their faces while the onslaught was going on, while in some they were completely overpowered.”

Jibrin Ibrahim, a professor of political science and senior fellow at the CDD, agreed that security agencies, despite their responsibility to protect citizens and the rule of law, were complicit in disrupting the elections and allowing attacks at polling units.

“Specifically, we are concerned about the direct contradiction we saw of massive police deployment, over 30,000 for both Kogi and Bayelsa states, but on the ground that massive deployment was not visible to eyes,” he lamented, adding jokingly: “Maybe they took another form because we know we are in Africa.”

He added: “We went through a lot of the key roads leading out of Lokoja and there were no checkpoints. And precisely because the police was not there to check, those who were moving around were armed thugs in Hilux vans, carrying weapons, and moving systematically from polling unit to polling unit.

“This is a direct indication that there was state complicity in what happened.”

He urged President Buhari to set up a panel to probe into why state agencies failed to act appropriately during the elections, stressing that democracy is gravely endangered by current happenings in the country.

Also at the event were Femi Falana, Senior Advocate of Nigeria and human rights activist, as well as Adele Jinadu, a professor and the chairman of the CDD.

An election monitoring group, Yiaga Africa, has raised an alarm over ongoing cases of...

A former Governor of Imo State, Rochas Okorocha, may miss out on the presidential...

TEN days after the arrest of the Accountant-General of the Federation, Ahmed Idris, for...
Advertisement