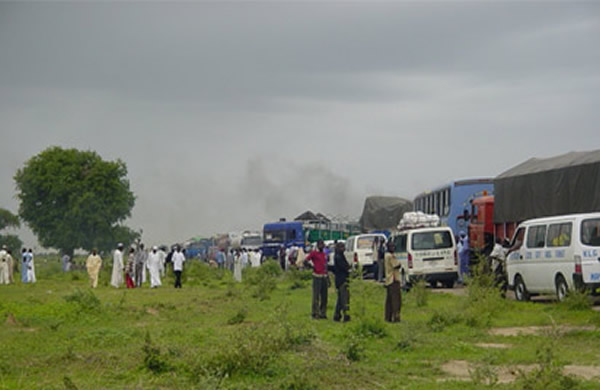 Many commuters travelling to Maiduguri from the Kano-Damaturu axis Friday evening were forced to divert to Yobe state after a rumour broke that the road was unsafe due to the activities of the notorious Boko Haram group.

The speculation of an attack along the Maiduguri-Beneshiek axis of the road drove fear into the hearts of the travellers who immediately cancelled their trips and opted to pass the night in Yobe.

A witness who was traveling on the road to Maiduguri, said he saw many motorists reverse and sped off to Damaturu for fear of losing their lives.

“We hurriedly reversed and returned to Damaturu, 30 minutes after we passed the town. Those who had gone earlier warned us to reverse that the insurgents are on the road,” he said.

However, it would seem that their fears were based on a false alarm as there was no report of violence on the road Friday.

A similar incident occurred last September when Boko Haram insurgents stormed Beneshiek, blocking the highway after the nearby military base was attacked.

The attack proved successful as no fewer than 100 people were slaughtered on the highway, a development which compelled military troops to commence patrol on the road.

Boko Haram has launched countless attacks in Nigeria’s North east, especially in Borno State once referred to as “the home of peace”.

There is no telling when peace will be restored as the group’s appetite for blood appears insatiable and security forces have not been able to prevent attacks even in their own backyard.

Other personalities on the list are Kano State governor, Rabiu Musa Kwankwaso and his Borno State counterpart, Kashim Shettima, a former governor of Kano State, Ibrahim Shekarau and the Emir of Kano, Ado Bayero.

The threat comes barely a month after a respected cleric, Sheik Auwal Albani, was killed in Zaria for which the group claims responsibility.

Shekau further threatened that the sect will launch attacks against Nigeria’s oil interests in the Niger Delta region.